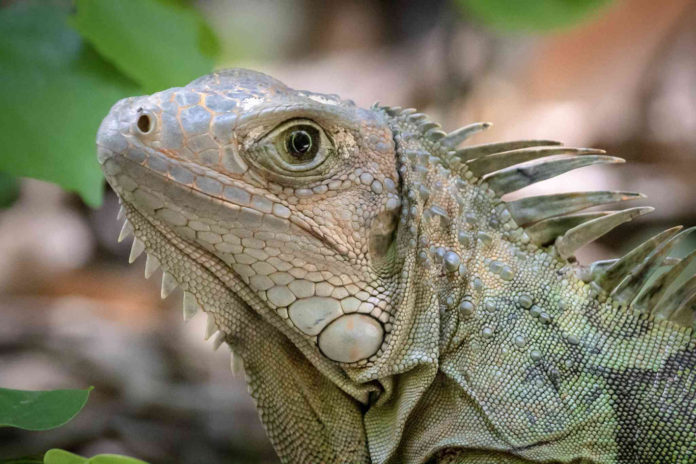 Along the road that connects Valledupar with Codazzi in northwest Colombia, vendors sell bundles of tropical fruit and deep-fried egg arepas to passing truck drivers. Along the 48 kilometer stretch of coastal road, crowned by thorn trees of a tropical dry forest, the gastronomic offer is diverse, but also illegal, with species poached from some of the most representative fauna of the Colombian Caribbean.

Green iguana, hicotea turtle and morrocoy are camouflaged in roadside coolers, while their eggs are sold in a way that borders on cheekiness: in clusters of one hundred swaying by an arm to catch the attention of passerby’s. Considered an illegal activity under the country’s tough environmental laws, and which can result in an 8-year prison sentence, the sale of reptiles and their meat is not exclusive to a road that crosses the department of Cesar – it occurs in almost every town of the costa and tradition that has survived over the years.

As many Catholics during Lent consider the consumption of red meat a “sin,” these reptiles are a  seasonal supplement to a chicken or fish diet. “Holy Week in Colombia is a critical time for wildlife, especially reptiles such as green iguana (Iguana iguana), hicotea turtle (Trachemys callirostris), morrocoy turtle (Chelonoidis carbonaria) and caiman (Caiman crocodylus),” states María Piedad Baptiste of the Humboldt Institute’s Biodiversity Conservation Program, highlighting that three reptiles lead the ranking of the 10 most trafficked wild animals in Colombia, followed by the parakeet, common parrot, cheja parrot, squirrel, gray marmoset, corn monkey and some frogs.

As Holy Week approaches, and time of year when families reunite and celebrate over food, the National Police has seized more than 9,000 iguana eggs in the departments of Magdalena and Bolívar, stored in homes and from the cargo holds of inter-municipal buses. The eggs were being trafficked by a gang known as Los Reptiles with an extensive distribution network along the Caribbean. Law enforcement officials claim that in order to extract the eggs, 300 iguanas were sacrificed. “Traditions and cultural roots can have a serious impact on biodiversity,” says Hernando García, director of the Humboldt Institute. “The urgency is to celebrate religious dates in a way that is harmonious with our natural resources.”

With a habitat that covers topographically diverse terrains, from dry forests to rainforests, even cities, the green iguana’s population remains vulnerable to extinction. The species mate at the end of the year and spawn between March and April, months that also coincide with Semana Santa. After removing the eggs, the females are often still alive, and on some occasions, hunters fill their bellies with stones and sew them up. Others leave them abandoned or sell their meat in local markets. Three eggs can sell for 600 pesos (20 cents) among food merchants.   “This nefarious practice of stuffing the bellies of iguanas is frequently seen in places in Córdoba and Sucre. However, some of the hunters only open them, take their eggs and leave them that way until they die,” says Acosta, curator of the Humboldt Institute’s biological herpetology collection.

Even though in 1967, the country’s former conservation entity Inderena passed a decree to protect the green iguana, their eggs and meat continue to be consumed at the table and “compared to the taste of chicken,” states Acosta. The eggs are also considered to be an aphrodisiac. A 2019 scientific journal by authors Elizabeth Ramos (Universidad de los Andes) and Natalia Rodríguez (University of Copenhague) found that even during pre-Hispanic times, iguanas were an important source of food for the tribes of the Colombian Caribbean. The practice continued throughout the colonial period and, in terms of exoticness, competed with the caiman and morrocoy turtle.

But for many who live on the coast, the green iguana is considered a pest,  reaffirming its effective reproduction. Iguanas are also key for keeping the ecosystem in balance. “Iguanas serve as food for various birds, reptiles and mammals […] that is, it maintains the food web,” says Acosta. “As it survives on fruits and plants, the green iguana transports nutrients to the carnivorous animals that feed on it. They are a link between nutrients in that web. Iguanas are not a pest, since they do not destroy any ecosystem,” says Acosta.

Reporting and information by Instituto Humboldt.