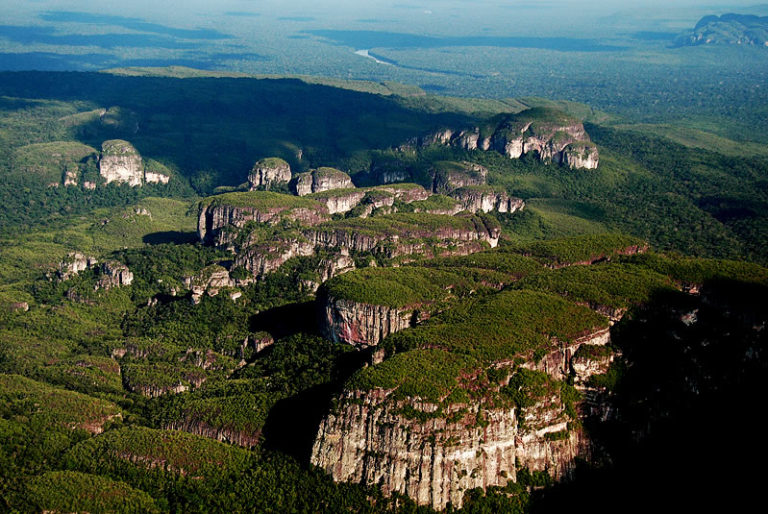 A team of international experts from the United Nations Educational, Scientific and Cultural Organization (UNESCO) received a proposal from Colombia’s Chancellor María Ángela Holguín to study the possibility of nominating the Chiribiquete Natural National Park on the World Heritage List.

“Chiribiquete covers one third of Colombia’s territory, and beyond our reach due to the armed conflict,” said Holguín, who presided over the high-level meeting. “Now, we can know our richness in biodiversity and culture.”

The nomination will be studied by the World Heritage Committee in June 2018 according to the findings of the report. The technical assessment mission of the International Council for Monuments and Sites (Icomos), and International Union for Conservation of Nature (IUCN) are in charge of verifying whether Chiribiquete meets the conditions to be declared a World Cultural and Natural Heritage site.

The initial meeting was held in the Palacio de San Carlos, seat of the Ministry of Foreign Relations, and attended by the Minister of Environment and Sustainable Development, Luis Gilberto Murillo; Minister of Culture, Mariana Garcés Córdoba; director of National Natural Parks (PNN), Julia Miranda Londoño; director of the Colombian Institute of Anthropology and History (Icanh), Ernesto Montenegro, and director of Heritage of the Ministry of Culture, Alberto Escovar-White.

The international experts will visit the park mid-October to meet with local authorities and members of the communities that live within the area. The Chiribiquete was declared Colombia’s 38th National Park in 1989.

Located on one of the world’s oldest rock formations, the Guiana Shield, Chiribiquete’s conserved area is 2,4 million hectares (109,653 square miles) and home to many natural wonders, from table-top “tepuys” to botanically diverse lowland forests. At the heart of Colombia’s northern Amazonia, the park extends across four departments: Caquetá, Metá, Guaviare and Vaupés.

In a recent awards ceremony at the National Geographic Society in Washington, President Juan Manuel Santos was praised by the trustees for his commitment to conserving Chiribiquete, as well as having more than doubled the park’s original size of 13 million hectares. “Santos is a bold leader with transformative ideas and a fearless trailblazer who champions policies that will help achieve a planet in balance,” remarked Nat Geo’s president Gary Knell. The prestigious conservation entity also highlighted the rich biodiversity found across Colombia’s Amazon, from jaguars, to tapirs and “birds found in no other region on Earth.”

Chiribiquete was first discovered by the outside world in the 18th century when Franciscan missionaries came into contact with the Carijona indigenous peoples.

Precambian rock formations are characteristic of the park’s craggy landscape, and deep canyons cut their way through “tepuys,” restricting access to human exploration. For most of the last half century, this park was essentially off-limits given the internal conflict and fact that the Revolutionary Armed Forces of Colombia (FARC) guerrilla maintained a heavy presence across the Eastern plains, known as LLanos Orientales.

According to UNESCO, 336 species of birds have been documented in the park, six of which were unknown to exist in Colombia. The organization’s profile of this protected area has also recognized “eight species of mammals in danger of extinction,” and a “crawling ant species belonging to the Megalyroidea family which has not as yet been studied.”

As one of last great frontiers for the study of biodiversity on the planet, the human footprint in Chiribiquete also remains a mystery with ancient pictographs adorning large rock faces. Anthropologists working in the park have identified some 20,000 motifs depicting both human and zoomorphic figures that could date to 450 AD. These realistic motifs, most commonly found clustered in groups of up to 8,000 on a single rock mass, makes Chiribiquete the most complete – and complex – collection of rock art in northern South America.

UNESCO  claims that Chiribiquete’s pictographic archaeology “represents a masterpiece of human creative genius because of the aesthetic refinement of the paintings.” The motifs are attributed to the ancestors of the Carijona – the Carib indigenous family – and who possibly settled this topographically unique region after navigating up the Amazon. Some leading archaeologists also claim the forefathers of the Carib could have begun their journey as far away as Madagascar, navigating Cape Horn, and entering the Amazon river, believing it to be an extension of the Atlantic.

UNESCO’s scientific report claims there is “evidence of migration of Carib groups, found among the Chiribiquete pictographs. An in-depth study […] will almost certainly yield significant data for the reconstruction of prehistory in the Amazon.”

With so many discoveries waiting to be found in this park, we will just have to wait until 2018 to hear the declaration from the authorities on world heritage sites, and whether Chiribiquete has made the list. Given its immense natural uniqueness, we can be sure that the aim to be recognized as one of the world’s great wonders, is secure.