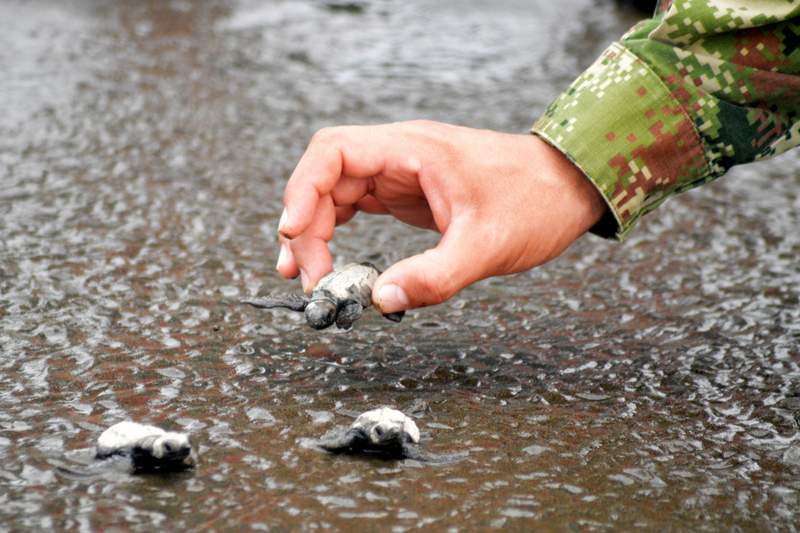 Colombia’s Navy showed how it protects one of the country’s most fragile inhabitants – baby sea turtles.

Thousands of tiny Olive Ridley sea turtles are abandoned by their mothers every year and left to hatch on Colombia’s beaches before making their treacherous first pilgrimage to the ocean alone.

These endangered newborns risk being killed by dogs, birds and crabs, poached for their eggs, meat, skin and shells and perishing under fierce sunlight. They are no bigger than the palm of a human hand yet must walk up to 20 metres to reach the water.

Colombia’s Navy responds every time a group of hatchlings are seen to emerge on El Almejal beach, near Bahia Solano in Chocó, and remains on armed guard until every last turtle has reached the ocean, even helping those babies who lag behind.

Hundreds of female sea turtles crawl onto the country’s beaches between June and October every year and lay around one hundred eggs each in a nest they dig in the sand. The mothers return to the ocean immediately, leaving their eggs to incubate for around 60 days until the babies emerge in a group and begin their pilgrimage.

Olive Ridley sea turtles, along with many sea turtle species, are fighting to survive in the face of poaching, accidental entanglement in fishing nets and the rapid destruction of their habitat. Climate change also alters sand temperatures, which affects the gender of their hatchlings.

Colombia has several charities that patrol its beaches at night and collect newly laid turtle eggs that are then transferred to a protected zone so they can hatch in peace. The turtles’ walk to the water is an important part of their development though and must be made independently, under the watchful eye of the country’s Navy.

About the author: Victoria Kellaway is the co-author of the bestselling satire Colombia a comedy of errors, available in Panamericana, Lerner and Libreria Nacional.

Envionmentalist Martin von Hildebrand and The Path of the Anaconda