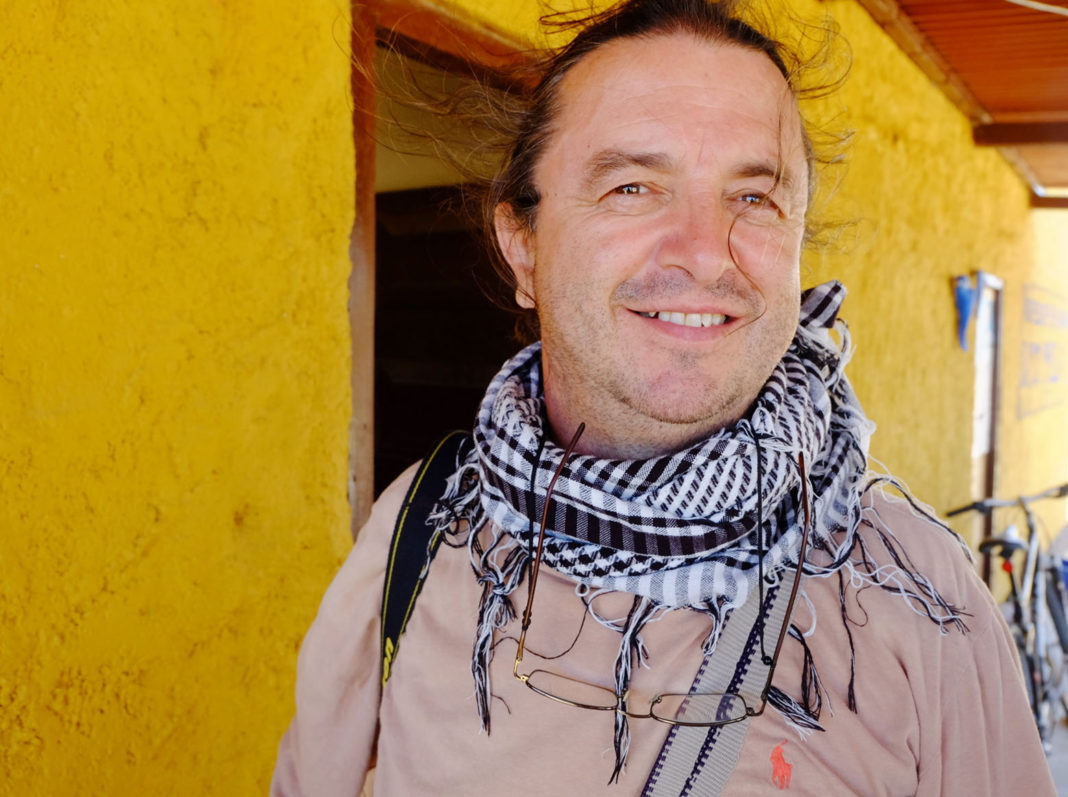 Darkness envelops Riohacha, capital of La Guajira, as we load the last crates of bottled water for a 5 am departure. Our driver, a burly Barranquillero called Jose, quietly observes the sleep-induced activity, like a Bedouin with a four-wheel metal camel. Our destination, the Wayúu community of Nazareth, at the edge of the remote Serranía de Macuira, a majestic mountain range that pierces the trade winds of the Caribbean with jagged peaks and this country’s northernmost National Park.

La Guajira is an unforgiving place, prone to violent sandstorms, and where dried-out lake beds become superhighways for speeding trucks, bursting at their caged seams, en route to the de- partment’s second largest city, Uribia, and conjoined to Riohacha with a paved road.

The day’s agenda includes breakfast in Uribia before the obligatory pit stop in which a half dozen fuel canisters are filled in order for us to complete an eight-hour crossing of 200-kilometers of barren, windswept desert. As there are no petrol stations beyond this community of merchants and Wayúu traders, gasoline, like water, is such a precious commodity that any experienced driver must calculate the weight of the gallons required for a trip, as well as keep the canisters hidden from direct sunlight and contact with food.

With every detail accounted for a five-day journey across Wayúu territory, Andrés Delgado, our tour guide and owner of Kaichi Travel, recalls the story of why he has championed this outback, both as an eco-conscious travel guide and relentless promoter of the department’s natural beauty. Mentioned in the National Geographic country guide as one of the operators that has opened up the department to international tourism, Delgado recalls how he has hosted world-famous film stars, musicians, and photographers to discover a region that far too often only makes a footnote in a magazine or television documentary on Colombia.

Delgado is a respected “arijuna” – outsider for the Wayúu – who has taken upon himself the urgency to develop sustainable tourism, from basic waste management to helping local guides better their knowledge of their territory. As the country embraces a new era of post-conflict tourism, Delgado is one of many national operators who, with limited resources, are dedicated to showcasing the beauty of their surroundings, despite often deep-rooted stereotypes, negative headlines, and rudimentary infrastructure.

Flanked by towering cactus forests, the seemingly mute Jose commandeers the all-terrain vehicle across gullies carved by a constant wind. Yellow cañaguate trees burst into color, providing shade to mud-caked huts and goats herded to puddles – turned – watering holes. Hours after breaking-off from Uribia’s paved road, we enter the lunar landscape of Bahía Portete, and Delgado stops the car to point out herons skirting among the mangroves of this bay. Never seeming to tire at views that are part of a tour portfolio, our guide is also an avid photographer, who relishes sharing the best vantage points with guests.

As Portete secedes to an expanse of rock-strewn valleys punctuated by traces of human settlement, Delgado recalls how he once had to call the office of the President of Colombia to request a helicopter after the famous Italian fashion designer Roberto Cavalli got tired of sleeping in a hammock in the desert and wanted to head straight back to “civilization.” The guide, amused by the situation, and not wanting to have a celebrity disappointed by traveling in Colombia, managed to get the military to dispatch a gunship to airlift the designer to the comfort of a hotel with running water. “He left Colombia very happy, once he saw the helicopter,” laughs Delgado of the many challenges he faces when accommodating travelers unfamiliar with what to him, is all too familiar.

“I always tell people what to expect. That they are coming to a very basic place with very limited resources. I try to undersell the destination so as to lower expectations.” But then, they always are amazed and “want to return.”

This humorous anecdote reveals how Delgado has become a self-proclaimed “cultural interpreter,” while trying to always accommodate the demands of jet-setters and fussy foreigners.

As the day rolls out breathtaking landscapes, at every photo opportunity Jose gauges tire pressure as every bump and rut gives the vehicle a beating. He is a stoic navigator, who knows when to turn in a desert that quickly becomes more arid and stark. “I rely only on my built-in GPS,” says Jose, when asked how he can differentiate between tracks in the sand and one cactus grove from the next.

We reach Nazareth in the late afternoon, despite some unforeseen obstacles, such as when one Wayúu family decides to block the road with dried cactus husks over some internal feud. By understanding the clan mentality of this matriarchal society, our guide calls local contacts to advise them of any change in the route of our arrival time. “I have to take safety very seriously,” claims Delgado “because the reputation of a specific region and country at large is at stake.”

Delgado began as a tour operator in his early forties after working different jobs, including art dealer, waiter, and logistics coordinator for a Canadian multi-national. Born in Bogotá, and having moved to Uribia with his family, the 56-year old entrepreneur has been running Kaishi Travel (which in Wayúunaiki means Sun and Moon) for 15 years. Convincing locals to improve their hotel infrastructure in order that visitors can have access to a clean room, or trickle of running water in the morning is a never-ending task.

Over the years, and weekly trips to ‘La Alta,’ Delgado has instilled a travel ethos that respects local culture while advocating issues many don’t want to hear, such as why it is fundamental that tourists and hotel owners know where to dispose the plastic bottles and bags that litter beaches and local landmarks. “I am very selective when choosing where I put up my guests, and if I don’t see a change in attitude towards cleaning up the environment, I simply don’t give them my business.”

Delgado is uncompromising when speaking his mind and taking on issues that affect the region. As the vice-president of ANATO’s Caribe chapter, he welcomes  new operators promoting extreme destinations and activities, such as open sea Kite Surfing in Punta Gallinas, as long as they don’t damage delicate habitats and are legally registered companies. One of the many problems La Guajira faces with eco-tourism is “a free for all” mentality. Delgado does not believe in the term Eco-tourism as the desert is a delicate habitat and any human footprint leaves a negative imprint.

Tourism is a fickle business that without its crusaders, such as Jose and Andrés, can end up tearing up the social fabric, turning entire communities into ones that rely on begging for their survival or tolerate one of the industry many scourges – sex tourism. For the close-knit Wayúu, Delgado will always be an “arijuna” given his skin color, Bogotá private school education, and world travels. But, he considers himself part-Wayúu when it comes to understanding the complexity of their cosmogony, culture, language, and traditions.

With employment opportunities scarce in a part of Colombia where annual rainfall is measured in a bucket, promoting sustainable tourism initiatives is a solution to entrenched problems. Along the 200-kilometers of sand that connects Uribia with Nazareth, there are at least 30 check-points, not manned by the Army, but children. At these flash “reténes,” fast-moving SUVs are forced to grind to a sudden stop when barefoot children and the very elderly, extend their hands in order to get some sort of payment. Hence, accompanying the fuel canisters in our vehicle are boxes of cookies, destined for the children, the majority of whom spend an entire day crossing the desert to find water.

“I am not here to change things, but to promote and generate opportunities on the ground,” says Delgado, during a stop at a ranchería, and what he calls “the first mall of the Americas.” In this white-walled township owned by a Wayúu family, women can be seen weaving an elaborate hammock, and visitors are invited to buy one of the region’s most coveted accessories – a single knot mochila. “In order to have sustainable tourism, one must invest in communities,” claims Delgado.

No trip to “El Alto” is complete without watching the sun rise and set from the ruins of the northern-most lighthouse on the continent, Punta Gallinas. For Delgado, La Guajira will always be a source of wonder and imagination, open to the world. For those of us fortunate to visit a region where the sun and moon share the same canopy of open sky, it is easy to understand why this cachaco is “married to the desert.”