Heading north along a desolate patch of the Caracas Avenue, an olive green hand emerges in the sky. Vaguely resembling the Arabic hamsa seen in necklaces across the Middle East, the little paradise-pointing palm is the crowning piece of kitsch atop the neighborhood’s most curious place of spiritual probing, the Templo del Indio Amazónico.

An “ancient” establishment in the quiet, middle-class neighborhood of Teusaquillo, the temple is housed in a large and dark green rectangle that might have manufactured bullets, toothpaste or matchboxes in better times. During hours of operation, a giant laughing golden Buddha is wheeled out onto the sidewalk. To his left is a life-size cardboard cutout of the Indio himself – the first of many more. From behind rusty black security bars blink the broken neon promises of urban blight: “Tarot” and “Palm- reading” – “the future revealed in fewer than 15 minutes.”

A self-styled parapsychologist and spiritual counselor, the “Prophet of the New Era” and actual Indio Amazónico has long since decamped for Southern California (where one could make the argument that spiritual problems are more pressing than even Caracas Avenue). Only twice a year does he return to Bogotá to lead a conference of multi-denominational shamans from around the world.

“When will his grace be returning?” I ask the 40-something woman leaning against a counter encased with magic soaps, raven’s heads, monkey skulls and stuffed dear legs. The impatient cashier and interim fortune-teller pauses, frowns and puts the finishing touches on a text. Grimacing, she finally works up the strength to look at me. “Sometime in August – maybe September.” Where are the other shamans from? I ask as puppy-like as possible. Looking at me as though I’m handing out literature for the Church of Jesus Christ of Latter Day Saints while asking about her sex life, she murmurs, “de todas partes.” So from all over South America? “Si, de todas partes.” And all over Colombia? “Si.” Any idea which regions? “De todas partes.”

Though visibly vexed, I plead with the interim healer to tell me what she knows about the man, the myth and the legend. “You’ll have to ask him yourself. Only the Indio Amazónico can reveal the truth about the Indio Amazónico.” I protest, “But he lives in California, and you don’t know when he’ll next be here!” She rolls her eyes, toying with spurious functions on her phone. Perhaps I am going about this the wrong way. Fine, I get it: how much for a palm reading? She pauses for some time, as if wondering to go for the rental-car upgrade. “30 minutes of tarot: $150,000 pesos. Deeper, double-whammy, in-depth analysis of the cards – $300,000.” I cringe. Her cellphone rings and she disappears into an even darker corner of the temple.

To say the Templo del Indio Amazónico is a strange, dark and stygian place is a gross understatement. The temple, however, is not without some twisted charms. Little busts of Pope John Paul II are laid out next to stuffed baby dears and fat laughing Buddhas; porcelain statues of baby Jesus sit on shelves next to El Negro Felipe, a 15th century runaway Venezuelan slave murdered by the Spaniards and considered the third most important deity in that country’s indigenous triumvirate of locals gods.

The temple is arranged somewhat like a makeshift evangelical church: to the left, a simple three-foot stage; to the right, 30-40 rows of metal folding chairs, each 8 or 10 seats in width. If it weren’t for the mustachioed Venezuelan bacteriologist-turned-Franciscan-saint (José Gregorio Hernández), Indio Amazónico-approved astrological periodic table and laughing Buddha that accompanied the portrait of Christ, the temple’s green carpeted nave could have passed for one of the musty Pentecostal get-ups one sees on every other corner of Latin America’s more depressed neighborhoods.

All throughout the temple, the spiritually famished are tempted with life-size offering boxes of various persuasions. Most, of course, are giant fish-tanks housing a bleeding, prostrate Christ: “Leave a little something and he’ll grant you a wish!” I counted three of these, but the Venezuelan bacteriologist and laughing Buddha tied in a close second (with two a piece).

In his offering box, however, the Venezuelan doctor was now dressed in a white flannel suit and matching top hat. In third place was Death itself, coming in with exactly one offering box, this time in the shape of an open coffin. Underneath the chicken wire meant to separate the spiritually eager from their hard-earned peso was a life-skeleton covered in coins. The sign above him reads: “He who gives 7 times will receive 70 times 7 in return.” Only at the Templo del Indio Amazónico are the New Testament and the Goldman Sachs campus recruitment agent joined at the spiritual hip.

I go to the counter for one last glance at the array of lucky soaps, potions and porcelain trinkets guaranteed to cure my every spiritual and physical ailment. I strongly consider buying a miniature of the Venezuelan bacteriologist currently under review for sainthood (the Vatican initiated a review of his credentials in the late 1940s but has yet to hand down a decision). A sign behind the counter reads, “Our employees can read seashells, cards, crystal balls, hands, eyes, halos, shafts and tongues. Will get to the root of any spiritual (and most sexual) predicaments.”

And if you don’t believe me, the proof is in the pictures. In the foyer on the way out are a series of photographs of the Indio Amazónico officiating various ceremonies to longhaired, leather-clad Latinos, ostensibly young left-wingers who’d gone the New Age route after their governments clamped down for real in the 1970s.

Though the pictures appear to span several decades, the Indio looks the exact same in every one of them. A longstanding diet of paprika, lime, and red peppers perhaps?

I, for my part, didn’t drop a coin in the Buddha’s box until I saw the Prophet of the New Era posing in separate photoshopped snippets with his only true peers: Bush Sr., Reagan and Mr. T. 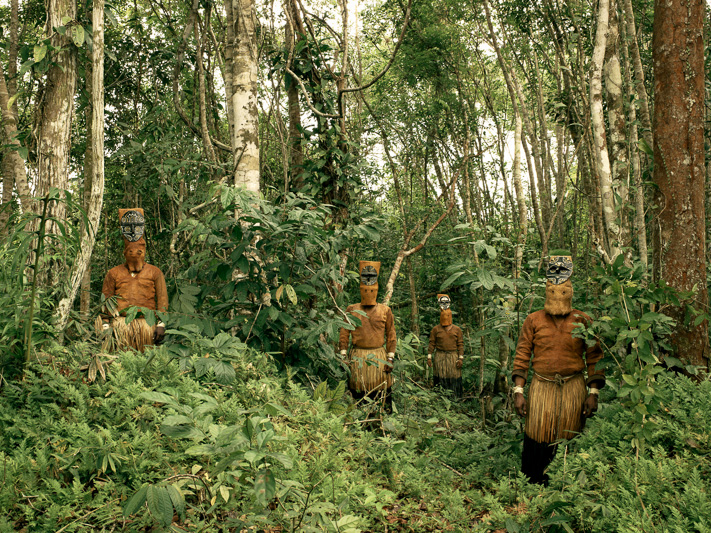