My wife is half French, half Colombian. She had never lived in Colombia but came here on vacations. We were living in Paris and seven years ago we began thinking of the opportunity to live abroad and have new experiences. We had maternity leave so decided to take full advantage of this and travel to see what new jobs we could find. We thought about Canada, but had a feeling that we wanted to get to know Colombia. As my father-in-law lives in Cali, it made sense. This country was heading in a new direction and it was always pleasant to travel here as a tourist.

What were you both doing in France before moving here?
My wife was a consultant in a big U.S company and I worked as a journalist covering Middle East affairs with a specialized weekly magazine. I began in journalism after I studied History and Oriental Languages. I was also a technology and retail journalist.

Is there a relationship between journalism and map collecting?

Yes. I believe so. It’s quite common for writers and correspondents to have an interest in antique maps, especially if they travel often to specific regions. Maps can tell you a lot about the origins of conflict, migrations and archeological sites. Mapmakers in the 19th century had to be very specific about what they were documenting for future generations. This is also what journalism is about.

How did you first get into maps?

I had a small collection of South American maps in Paris. After my visit to Colombia before the election of Uribe, I had this intuition that the situation in the country was going to improve and that I could start a business here. I had no precise idea what I was going to do, but I had this feeling that I could contribute to something that would respect the heritage of this country.

Was Bogotá a good place to start?

Yes. There really wasn’t an established rare map business in Bogotá, despite the fact that there is a very long tradition in the city with antiquities and entire streets dedicated to this. It was something that I needed to learn by myself. Fortunately in France, I had some money and time to begin my collection.

And who are your clients?

Part of my client base is the upper strata of Colombian society, who have an appreciation of rarity and their history. I had to be very careful from the beginning to collect only the most genuine of artifacts overseas, as a solid reputation for authenticity is the foundation of a respectable business. As a foreigner here, I had to be especially careful to always respect my clients and their opinions.

Are maps of Colombia hard to find?

There is a specific problem with maps of Colombia. When the Dutch and French cartographers were here in the 17th and 18th century they were mapping very specific areas of South America: such as the source of rivers and natural boundaries. We have what we call “common’ maps of Colombia that were done much later on with the birth of the Republic. I spent most of my time in Paris looking for those rare and hard to get maps. It’s a very specific undertaking. I am proud of this as many rare maps are now in Colombia for the very first time.

How did you get to Bogotá’s  ‘Antique Street’?

I had around 80 maps, but few very good ones. Mostly maps of South America and Colombia placed with the Andean region. I made an exhibition in La Candelaria and managed to sell some. An antique dealer friend, Jaime Manrique, called me said that there was a space available on the ‘Antique Street’ of the Calle 79B. It was quite a challenge as the investment was quite important. I managed to sell two important maps from the 17th century, the first month. Then the business stabilized.

How has this rare business treated you?

The business is the confirmation of so much of what I have done in my life: to read, teach and research a specific histori- cal event. Although my specialty was Africa and the Middle East, I began to read as much as I could about the history of the place I was living in. This is what educators essentially do. It enriches the experience of owning a rare map or 200-year-old print.

How do you reach your potential buyers?

A lot of people know Bolivar Old Maps thanks to word of mouth. The store has become somewhat of a meeting place for people interested in talking about Colombian history or sharing personal experiences over a specific item. Other antique dealers put me in touch with their clients and as a result, I have given many lectures on maps and my business.

What is a popular theme in prints?

One of the most important episodes in the history of pre-Independence Colombia was the Siege of Cartagena by Admiral Edward Vernon in 1741. This event is documented in rare books and maps. As it was announced two years before it actually happened, printers started printing in advance how the invasion might look and the layout of Cartagena, its ramparts and surrounding countryside. Coins were also printed to celebrate the taking of Cartagena by the British. This is why there are so many interesting maps and drawings of this key moment in naval history.

So Cartagena has inspired many collections?

Yes. During the 18th century you had ten times as many maps of Cartagena than those of Colombia. Map printers and car- tographers were the journalists of their times and as they worked for money, they would only print if the historical event had merit or an interest with the public. Cartagena aroused the curiosity of the Europeans, especially the siege and eventual surrender.

How do you price an old map?

When you set your prices you have to look at the prices of your fellow dealers in the world. The map business is global and very interconnected. I sell 70% of the maps on Colombia and Cartagena in the world, either directly or through my website.

Will old maps ever run out in the market?

No. There are always new collections arriving on the market and estates might release through auctions maps never seen before. The map business is changing quickly though, as prices in the last five years have risen. It’s a business of rarity and the challenge of finding the unusual.

Has there been any work you regretted selling?

I share in the joy of finding and selling something that is beautiful and has value to a certain client, and this means that it can be hard not to become emotionally attached to a certain item. Once I sold a beautiful lithograph of Bogotá sketched the 1860s. The lithograph left with the buyer to London and I was saddened that it didn’t stay here where it was originally drawn. I felt there was a piece of me in the work. The lithograph eventually did return and continues to be in good hands.

Collecting maps hasn’t been part of Colombian culture, as the climate is hostile. Until the 1960s people lived in humid houses and it wasn’t possible to preserve antiquities in good condition. Colombia maps and prints were done by foreigners exploring the country for anthropological or geographical purposes to help explain overseas what they were seeing on the ground. Expeditions always had a scientific and educational element. So the prints were international expressions of local culture and folklore.

So you have any plans for expansion?

I would love to open the market to those who want to buy the $25 dollar map as a decorative item. I am thinking it would be nice to offer a full view of the world, to be an open space for maps from around the world. These days, if you want a map of Jerusalem or Anvers you need to be there. My focus though, will continue to be the Americas.

Colombia will be home for many years to come, I gather.

I think so. To really enjoy a country, you need to really enjoy your job. I probably have the best job I could ever imagine to find in Colombia. I have friends every week who drop in and visit me. Those who share stories over coffee. The quality of life in Colombia is impressive.

Any issues with living here as a foreigner?

I have one problem: I don’t appreciate the really hot and humid places. I inherited my English grandmother’s skin, so I burn very easily. I am very happy in Bogotá. It’s a city with an ideal climate for me.

And a favorite places in Colombia…

I really like Villa de Leyva. It’s a place I go to with my family. I still have many things I want to see in Colombia, such as Mompóx. 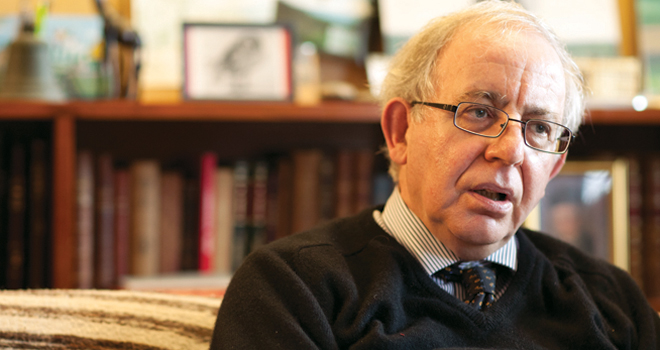