Michael de Miguel is one of the founding partners of Xarcutería, a restaurant that opened its doors on the Carrera 15 near Calle 85 several years back, but recently inaugurated a new home facing the Parque 93.

The expansion of Xarcutería from a walk in 35-seat venue to the “inner circle” of Bogotá dining is a clear sign that De Miguel knows what he is doing and how to satisfy the appetites of demanding customers.

The son of a Colombian father and American mother, “Mike” got his start working in San Francisco and Miami restaurants as a cook and sous-chef. While on the West Coast, he helped launch chef Michael Mina’s RN74 wine bar and French restaurant. Despite studying Finance, however, Michael wanted to travel, and eight months in Spain consolidated a love of cooking and cured meats, now a hallmark of Xarcuteria.

With seventy-five seats and bar area, Xarcuteria heralds itself as a “gastro pub.” Guests can choose to either sit in the main dining room or on the terrace. The menu comes delivered on a wooden tablet with several sheets of paper listing the many choices at hand.

Dishes at Xarcuteria are prepared to be shared. Under the ‘Mordiscos’ category, several items stand out: the grilled artichokes with fresh cheese and marinated tomatoes, the Pastrami croquettes with Dijon mustard and the white beans topped with sliced Andouille sausage. Xarcuteria is as much of a restaurant as it is an artisanal “factory” for making its own sausage and smoked meats. The founder oversees every aspect of the process, from the meats which are selected for curing, to the amount of time needed to bring out the best in their flavor. Michael hopes this side of the business will continue to grow as clients of Xarcuteria have already discovered the pleasures of eating a New York City Reuben sandwich filled with Xarcuteria’s very own pastrami.

The pastrami croquettes are savory and accompanied with a generous portion of Dijon mustard. Perfectly round and crunchy, these bite-sized starters set the tone for the Xarcuteria experience. The Andouille, as a starter, was a meal in itself and a favorite at the table. The white beans were neither flaky nor over-cooked, but just right, and the sausage added that touch of spice. Popular in New Orleans, in Cajun cooking, it is a sausage of French origin and used in stews.

In what appears to be an eternal quest for a great burger in Bogotá, the word is out that Xarcuteria prepares several, and all with a generous patty of ground beef. Since my host grew up in California, I went for his California Burger with guacamole, bacon and cheese toppings. From the moment it turned up at my table, I was transfixed: the burger was stacked the way a burger should be, and it was quite a challenge to take the first bite. I thoroughly enjoyed my main course, but burgers are very personal love affairs, so I will leave it you esteemed reader, to give me your feedback.

While I took the challenge with an American classic, my wife tried Michael’s recommendation: the Korean Fried Chicken sandwich. Garnished with Korean spices, deep fried and placed between two buns of brioche, the plate was also an excellent choice. We missed out on Xarcuteria’s marinated Dry-Aged Ribeye and the 250 grams of Filet Mignon, but as the restaurant’s prices are reasonable, there will be more outings in the near future.

Michael has made a life for himself in the capital as both a talented chef and a determined entrepreneur. His U.S background has given him the necessary tools to cater to expats who appreciate a pastrami sandwich while watching the Sunday NFL or his Colombian clientele who appreciate pork ribs with barbecue sauce. For the vegetarian diner, the house offers several options, such as a Kale Caesar and a Rugula with artichoke salad. Oh, and I almost forgot to mention the French fries and coleslaw…what a treat!

You need to have more than goodwill to bankroll a restaurant in Bogotá. It’s an increasingly crowded market out there and many attempt to do the impossible. Xarcuteria is not pretentious, nor does it aspire to be complicated and expensive.

The service, however, was confusing and somewhat ambivalent. This was a negative.

What Michael brings to the table, is experience and his love of food. It’s a recipe that puts this eatery a notch above the rest. 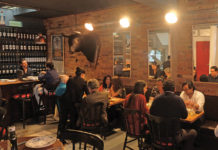 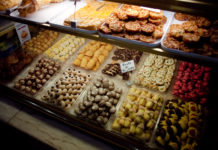 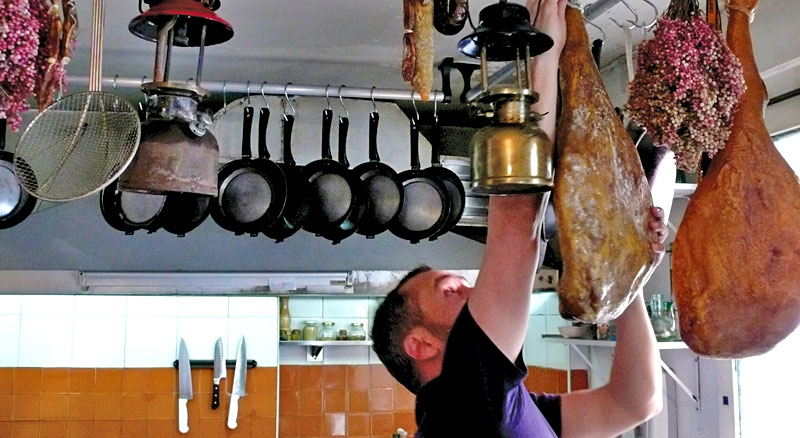