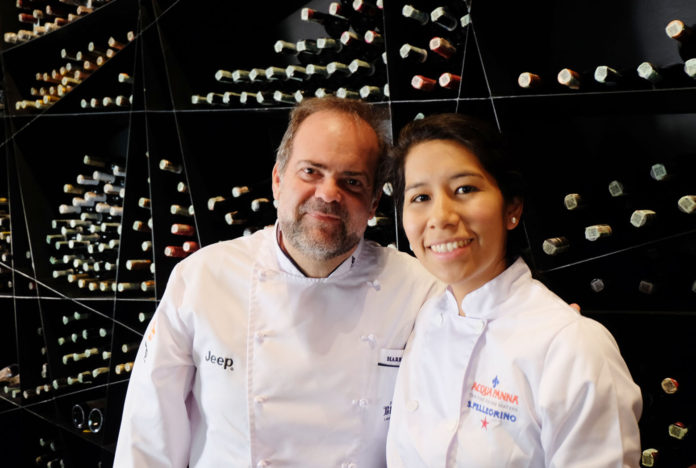 Elizabeth Puquio received the news in the kitchen of the Santiago-based restaurant Ambrosia that she would represent Latin America as a finalist in the prestigious 2017-2018 San Pellegrino’s Young Chef Awards, and a once-in-a-lifetime opportunity to showcase her talent before an international audience at the Grand Finale in Milan.

With a dish created especially for the competition called Pescado de la Costa (Coastal Fish), the young Peruvian chef who began her career in Lima’s legendary Central, designed a lunch menu at the Bogotá restaurant Harry Sasson as part of the Italian water company’s regional initiative to inspire the next round of contestants for their 2019-2020 edition.

To give a taste of Puquio’s inventiveness and why her connection to seafood won over the jury, she began a four-course lunch with her country’s most famous recipe – ceviche –  but infused with Colombian tropical fruits. The second course, a risotto with artichokes, palm hearts and topped with sliced Iberian ham revealed the chef’s use of local ingredients to create a cross-cultural dish, and that set the narrative for the next two mains: steamed filet of fish with criolla potatoes and a herb salad, and braised ribeye in a red bean glaze on a bed of a plantain purée.

Puquio’s dishes were paired with Chilean Chardonnays and Argentine Malbecs, adding to a dining experience that showed why the 28-year old Peruvian has been recognized as a rising star on the international culinary circuit, and was selected among 3,000 applicants of Young Chefs.

The recently launched 2019-2020 edition will chose candidates from 12 regions depending on the location of their restaurants, and has introduced three new awards in the regional contest – Fine Dining Lovers Food for Thought Award, S.Pellegrino Award for Social Responsibility and Acqua Panna for Connection in Gastronomy. These awards will also be presented at the Grand Finale along with the final winner of S.Pellegrino Young Chef 2019-2020.

Young chefs are the future of sustainable gastronomy and their impact is felt (but often not seen) beyond the kitchen. To recognize their role in the competitive world of food and those ready to pioneer social change in their dishes, San Pellegrino believes that technical skills must match with a personal vision. If you believe you have what it takes to be the next Young Chef and committed to make the world a better place by using sustainable ingredients, applications opened on February 4 and close April 30.  For information regarding who are the seven chefs selected as the jury and all related events of this world-class competition, visit the official website www.sanpellegrino.com and follow with hashtags #SPYoungChef #sanpellegrino