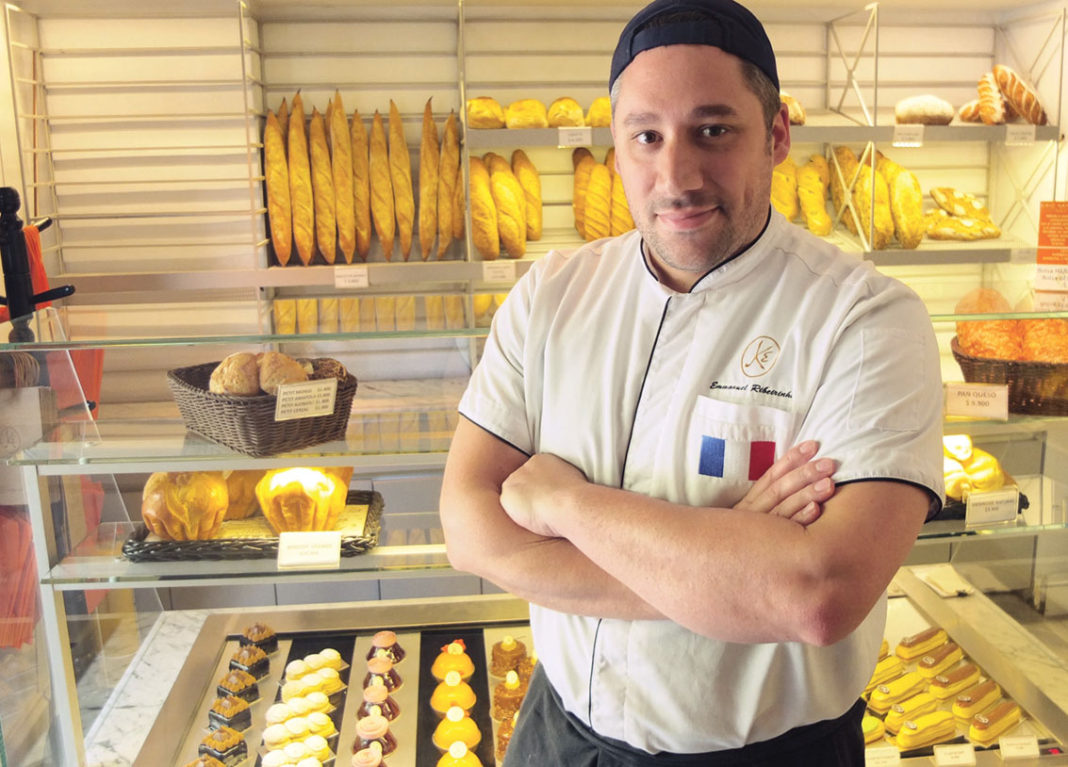 Eric Kayser has built an empire on bread and baking, as four generations of Kaysers did before him. Now, an established household name from New York to Hong Kong, Dubai to Mexico City, the boulangerie Maison Kayser first opened its doors on the quiet Rue Monge in Paris back in 1996, and has expanded exponentially to include over 100 locations on some of the most prized real estate in the world.

Getting Mr. Kayser to put his name to a Bogotá establishment didn’t take much convincing, as one of the founding partners of the Colombian enterprise is the experienced restaurateur José Pajares of Pajares Salinas. Pajares wasn’t the only person interested in the franchise, though. A group of French-Colombians had also asked to represent the brand. As suggested by Kayser himself, both groups sealed a partnership that would go on to formalize Kayser’s arrival in Colombia. Two years of careful planning launched the first Maison Kayser in the city, as baking bread in a high-altitude also required the expertise of a master baker, and someone especially appointed by the entrepreneur.

After enrolling at age 16 at the European Culinary Center, Emmanuel Riberinha landed his first job in one of Paris’ most famous restaurants, the Guy Savoy. Working under a three Michelin star chef, introduced the French-born cook to a world of gastronomic possibilities. He then decided to move beyond the eponymous to more popular, earning his first leading role at La Coupole – the 600 seat brasserie immortalized by Ernest Hemingway, and where Jean-Paul Sartre philosophized over brioche. As one of the most famous brasseries in all of Paris, Riberinha was on sacred ground to create immaculate mille-fueilles (with no less than one thousand layers of ultra-thin pastry), as well as onion soup worthy of hungry French masses. The chef

then embarked on a culinary world tour that included kitchens in Marti- nique and Morocco. But, when an offer came through to make macaroons for the crème de la crème of Russian society, Riberinha headed to Saint Petersburg, where after six months, he was taken under the wing of the Kremlin.

Riberinha’s talents with sweet and savoury caught the attention of Eric Kayser, and his first posting, ambassador of the perfect baguette in Saudi Arabia. But, a mansion in the desert was soon replaced by a renovated house on Calle 81 when the King of Bread launched on December 5, 2014.

As Maison Kayser celebrates three years in our capital, it has grown to include two other venues – Zona G and San Patricio. Quintessentially French with a menu that includes tartines, quiches, and the iconic croque Kayser, local ingredients, from tropical fruits to grains, figure prominently in the house’s salads and deserts. Colombians like variety in their food, so to satisfy the palates of a very global metropolis, the menu includes curries, burgers and even a Kayser a Caballo – take on a bistek a caballo. Innovation and using local produce is part of the Maison’s philosophy, and tropical fruits are incorporated into pastries and chocolate glazed mousses. For the chef, however, uchuvas are a personal favourite, and he is always in awe of the many varieties of fruit Colombia has to offer.

If you’re planning a business lunch, the Boeuf Bourguignon at $29,000 pesos, served in an iron skillet with rice and a hint of red wine delivers on a French classic. But there are other European options as well on the menu, such as Iberian meatballs in a tomato sauce ($28,000 pesos) or Mediterranean salad with mozzarella, olives and pesto ($23,700). Closer to home, for those who miss bagels, Maison Kayser offers a smoked salmon sandwich with rugula, cream cheese and avocado.

This neatly stacked bagel for $22,800 pesos is a meal in itself and joins other cold selections such as the house’s Chicken Ceasar sandwich or roastbeef in ciabatta.

The stalwart of this boulangerie is bread, baked pre-dawn by master baker Arnaud Corbeau, in the flagship restaurant on the Calle 81 and delivered fresh to the other two venues. In order to create over 100 varieties of bread, these chefs worked tirelessly over several months with a dozen types of flour and yeast to produce croissants, brioche and baguettes worthy of Kayser’s reputation for artisanal breadmaking. All breads that are not consumed at the end of the day are donated to foundation Fundacaex that takes care of children from low-income families while both parents are at work.

Asocial focus and plans to keep innovating the menu are the essential ingredients of Kayser’s success in Bogotá. So, keep your eyes open for the daily lunch specials and Riberinha’s desert of the month, because at Maison Kayser, going local is an prized ingredient.