Even though we were a great distance from the nearest coastline, the sea was ever-present. It turned up at the tables as lobster tails, scallops and sea bream. In the sunlit courtyard of Caracol Azul (Blue Snail in English), one could almost hear the sea, the cobalt walls and hanging lanterns adding to the décor of a fine seafood establishment that launched in July in the Rosales neighbourhood.

For those who have visited Guayaquil in Ecuador, Caracol Azul is one of the must-eat-at places in the Pacific port city and has been serving guests since 1975. At the helm of this iconic fresh-fish venue is Muriel Ann Beaven, who after four decades still goes to the market everyday to buy the crab meat, lobsters and fish that are then lovingly prepared in her award-winning restaurant.

Muriel’s godson, Julian Bedout, is no stranger to the Bogotá dining scene after having run La Gloria, his seafood restaurant in Colombia’s capital. Looking for new gastronomic horizons, Julian traveled to Ecuador to learn at the hands of Muriel, taking in every aspect of her succesful business before proposing to open a Caracol Azul branch in Bogotá with a similar menu to the Guayaquil flagship.

For the venture to take off, the partners of the new venue knew they needed a top chef who could maintain the established traditions, and they had just the person in Berardo Lucero Huaman, an exceptional Peruvian-born chef who worked in Muriel’s kitchen for 25 years and has developed many of house’s signature dishes.

Chef Lucero turns up at our table and recommends we try his blue crab bisque. It is the first entree of a casual lunch in an elegant setting. The restaurant was designed by Julian’s wife, Camila Otero, who successfully combines a sense of antiquity with modernity on two floors of a renovated Bogotá house.

We accompany the creamy bisque with a glass of chilled chardonnay. The bisque could have been a meal in its entirety and was a winner in every regard. My dining companion and I exchange glances. We know we have entered into a gastronomic oasis where seafood is exquisitely cooked and presented.

For our second entree, we try one of the hallmarks of Galician cuisine: the grilled octopus with an olive oil and paprika marinade on top of diced and roasted potatoes. It is another outstanding dish in the hands of chef Lucero.

The entrees are reasonably priced, and there is plenty of choice: onion soup, the Peruvian classic ceviche, a vegetarian take on ceviche (with articoke, mushrooms and avocado), and salads prepared the Greek and Caracol Azul way.

I had been tempted to try the baked crab with blue cheese as my main ($37,500), but Julian insisted we try one of the house favorites, a fideuà of prawns with lobster sauce and orzo pasta fideus ($48,500). More chardonnay began to flow, and we went with the owner’s recommendation.

If you are a dedicated lobster lover, the “lobster thermidor” is a real treat – truly a meal for a special occasion. The menu also includes a sea bass fillet prepared Florentine-style with white wine, spinach and a creamy cheese sauce.

The house’s squid ink rissotto (“rissotto neri”), with generous portions of squid, octopus and shrimp, is also a house favorite and a recipe that continues to delight guests in Guayaquil.

If seafood is not your preferred dinner, don’t fret. Caracol Azul has a very complete menu of meat and poultry dishes as well, including a baby rack of lamb with rosemary, traditional French pepper steak and gorgonzola tenderloin.

While we enjoyed a laid-back lunch at Caracol Azul, the restaurant is very much in vogue for the fine-dining evening crowd, and the house’s open patio has as enjoyable bar area to enjoy a gin and tonic or Azul Azul, the restaurant’s signature cocktail of the vodka, lime and ginger.

Or, for those cool Bogotá nights, pull up a chair next to the roaring fireplace inside and the enjoy a rum with passionfruit concoction they call Remember Me.

We won’t be forgetting about Caracol Azul anytime soon. Our lunch was outstanding, and the service staff were attentive, equipped with the menu on a tablet and well versed when it came to selecting the best choice in wines. Bedout’s dream of going into partnership with his grandmother’s Guayaquil restaurant will yield results in a city where finding good fish too often resembles a Facebook update: “It’s complicated”.

But at Caracol Azul it’s not. It’s fresh. It’s authentic. And in the hands of Lucero, a culinary virtuoso, you will forget you are eating in the mountains rather than on the coast. 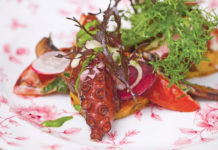 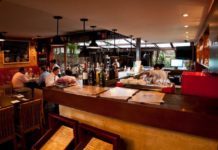 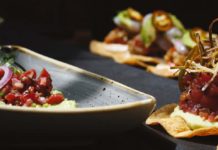 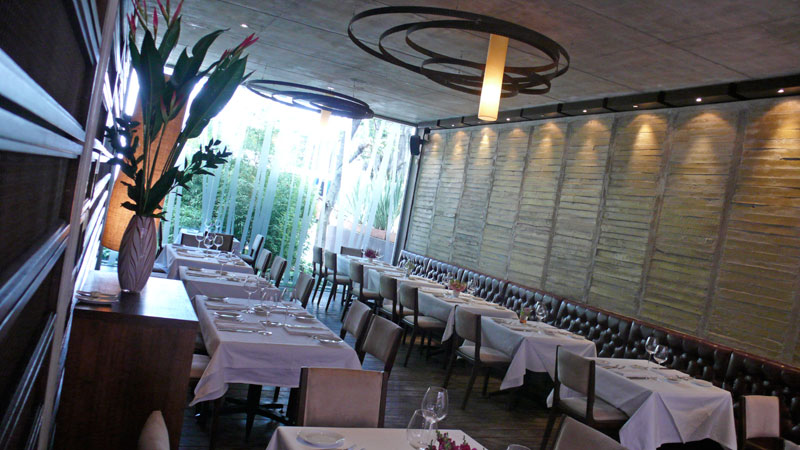