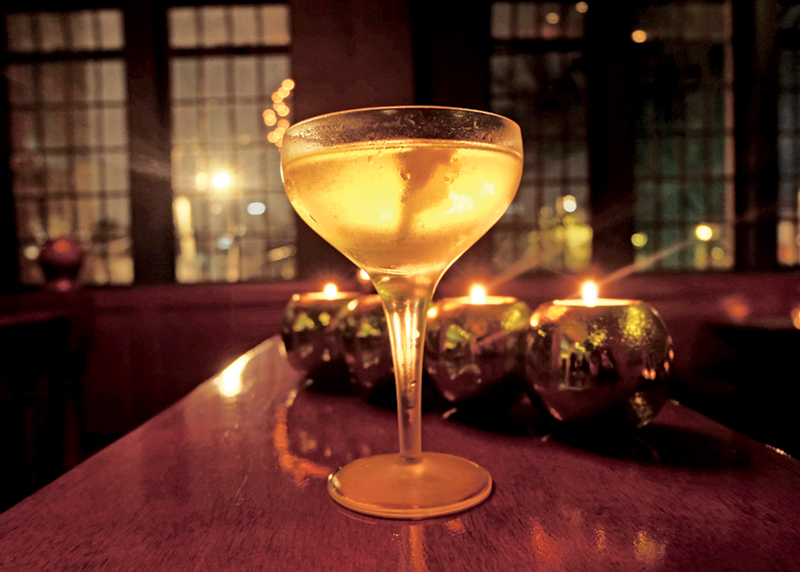 BOGOTA, January 25. Editor’s Note: We have received news that ‘Eighty-Six’ has closed. We regret this, as it happened to be one of the best cocktail bars in Bogotá. We wish Gonzalo and team the best in their future ventures.

Here, the review for posterity.

I was not going to heed Gonzalo’s “eighty-six” dashing out the back of the bar, with prohibition-era cops storming up the wooden staircase. But if you didn’t know you are in Bogotá (it can happen after several of Gonzalo Marin’s cocktails), the “speakeasy” Eight Six recalls Chumley’s, an infamous literary haunt in lower Manhattan that elevated to Prohibition raids to an art form when the police, who were on the payroll would call and say “86 your customers” – meaning send them out the front door because we are going to come in the back. And once that happened they would raid an empty bar.

But there’s no back door  of the renovated turn-of-the-century house in Quinta Camacho that takes its cue from the infamous wood-paneled speakeasies that fathered barroom etymology and many of our contemporary libations. For the founder of ‘Eighty-Six’ Gonzalo Marín, the idea of returning to Bogotá in his late twenties to open a different-era style bar was a natural step in the right direction, as after 10-years serving drinks in New York’s finest, the capital needed a place that could serve up the Old Fashioneds, as well as a chilled Alaska.

At age 31, Marín stands behind a glowing chorus of bottles, welcoming guests to his venue, framed by small windows and a “Big Bang” chandelier that exudes light as if on an intergalactic mission. And I am on a mission, as well – to discover what’s the hidden ingredient that makes ‘Eight Six’ Bogotá’s most enigmatic cocktail bar.

Within minutes of taking my place at the high bar, Marín slips me the cocktail menu. It’s easy to peruse, categorized by Classics, Negroni, Martini, Sour and New World. The prices are standardized, so if you shuttle between ‘Alaska’ and ‘Manhattan’ (Martini) go into a Tail Spin (Negroni), and end up ordering a Hanky Panky, you have only skimmed the sweet – sour surface of this establishment.

Living in the New World with mojitos and rum at every turn, I ask Gonzalo to serve a ‘Bartender’s Choice’. Before reaching for the tools of the trade – jigger and mixer – he reads me like an open book and proceeds to fill in the blanks. “If you have talent and pay your dues, you can work your way to the top,” says Gonzalo of the years spent serving drinks among New York’s best to pay his way as a business student in Berkeley College. From “bar-back” to front man, the Bogotá entrepreneur decided to trade-in the corporate world for a chance to live his passion. Together with former roommate Jessica Puentes, they returned to the Colombian capital and opened their first business. With the ethos that “you can make amazing cocktails, but if you’re not a good host, what’s the point,” word quickly spread of a speakeasy. Rescuing classic cocktails from the 1930s is just one of house’s main attractions, until, Gonzalo presents you with his ‘Choice’.

I am served a signature drink of Mezcal, Brandy, coriander and maple. The name escapes me, but I call it a “Smokey Canadian.” My companion, who shares the bartender’s love for Japanese culture and food (Gonzalo spent most of his childhood in Tokyo after his mother was posted there with a bank), is next in line at the bar. She is handed a glass with an alchemic mix of Japanese Shochu, French Chartreuse, English Gin, cucumber and lime. As a refreshing start to a cold Bogotá night, Gonzalo earns our trust. “If you don’t like what I serve you, send it back,” he says. “No questions asked!” And he means it.

Chef José Ragazzi created a menu to compliment the house’s cocktails based on local ingredients, but inspired in some hearty Spanish cuisine. As we wait out the next round of drinks, a hot skillet appears with oyster mushrooms, shitake, chorizo and egg yolks ready to “crash.” The take on the Iberian classic Huevos estrellados as an ideal starter, shows the importance Eight Six places on the kitchen. For Gonzalo, the dining experience has to be on par with his drinks. “If you come tomorrow, you’ll have the same experience.”

Eighty Six remains a revelation, even though it opened back in January this year. In a city where too often cocktails equate with getting drunk, or are an excuse to disguise bad-quality food, this sophisticated bar is all about having a conversation, enjoying the company of friends, learning something new. After several of Gonzalo’s inventions – each one tailored for a moment – I consider Eighty-Six to be in a class of its own, reaching for excellence in its flavors and selection of premium spirits. As we polish-off the night with a glass of the Italian-born Fernet-Branca, I remain a novice of these glowing elixirs, sakis and single malts, but at Eighty Six, I feel I found a friend, one who has restored my confidence in ordering a cocktail, and this is by far the most important ingredient any bartender can have.