It’s an innovative proposal and one, which appeals to those to like to cross over gastronomically. Combining Asian precision with local ingredients, Mordida, goes for your appetite; and as its name suggests in Spanish, it’s better to try many bite-sized portions, than to be wooed by one main.

Chef Daniel Pedrosa is as much of an inventor in the kitchen as he is a philosopher of food. He has studied food, and commands in every dish: from elegant interpretation of Spanish dishes, to Latin American-inspired starters, such as Montaditos de tortilla con chorizo santarrosano.

A relative newcomer to the city’s gastro scene, Mordida, takes over two floors with its casual dining setting. On the first floor, a fireplace and patio cater to guests and protect against the inclement Bogotá weather. On the second floor, there’s a more secluded space for those who want to be within arm’s reach of the sommelier and the restaurants’ impressive selection of wines.

The brainchild of entrepreneurs, Alfredo Violi and Francisco Cardenas, Mordida showcases all the essentials of fine dining, and its menu includes hot and cold tapas, salads and ceviches, a ‘Crudos’ selection (or Japanese inspired raw cuts), Street Food, and a section titled “Los de Siempre (The Always List) which goes beyond the nibbly to include favourites, such as artisanal raviolis in a duck comfit, and a carbonara linguini with prawn medallions. And we haven’t even turned the page to the meats and daily catch.

As aficionados of the bold and brazen, we begin the night with two entrées: Serrano ham croquettes filled with Portobello mushrooms and a Temaki of spicy tuna with sweet, cubed shrimp. Both are exquisite in taste, and the entrées begin to reveal the magic that is Mordida.

Mordida’s lake trout tartar with mango chutney may fall under the Daily Fish category, but outshines in a class of its own. Tender and topped with capers and an apple vinaigrette, the dish succeeds in every way.

Accompanying our dishes with an Argentine Bonarda was an informed choice, yet at times, the wine  overpowered Pedrosa’s subtlety and alchemy.

With a degree from the Michelin star Hospitality School of El Salvador, and having worked his way through notable restaurants such as Casa Gerardo, (one of the most prestigious restaurants in the principality of Asturias) and the luxury hotel Peninsula House in Dominican Republic, Pedrosa, brings to the Mordida’s kitchen time-tested tradition with meticulous technique.

Thinly-sliced Angus on top of a Nigiri rice bed, topped with a glaze of Nikkei sauce, seemed just too adventurous to be true. So, we gave it a chance. While the beef was “en su punto,” this Japan-meets-Pampas platter, didn’t quite seem as endearing as others; so once finished, we navigated away from the East, back to a more familiar continent with a rice bisque of Pacific shellfish, served in a cast iron cauldron: the Arroz meloso de mariscos del Pacífico.

Comforting as a comfort dishes come, the portions at Mordida are measured, without being minimalistic. While the service seemed erratic at times (the restaurant had just launched), the venue takes pride in being a place to go “without a tie.” So whether for lunch or dinner, this informal 74 seater, does require a repeat as the “mordida” is definitely in the bite, and one, which delights. 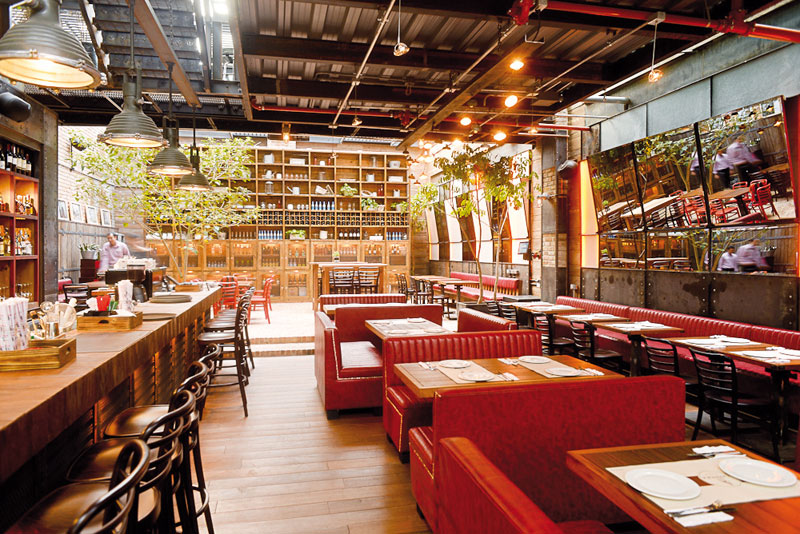 Eight restaurants to visit in 2014