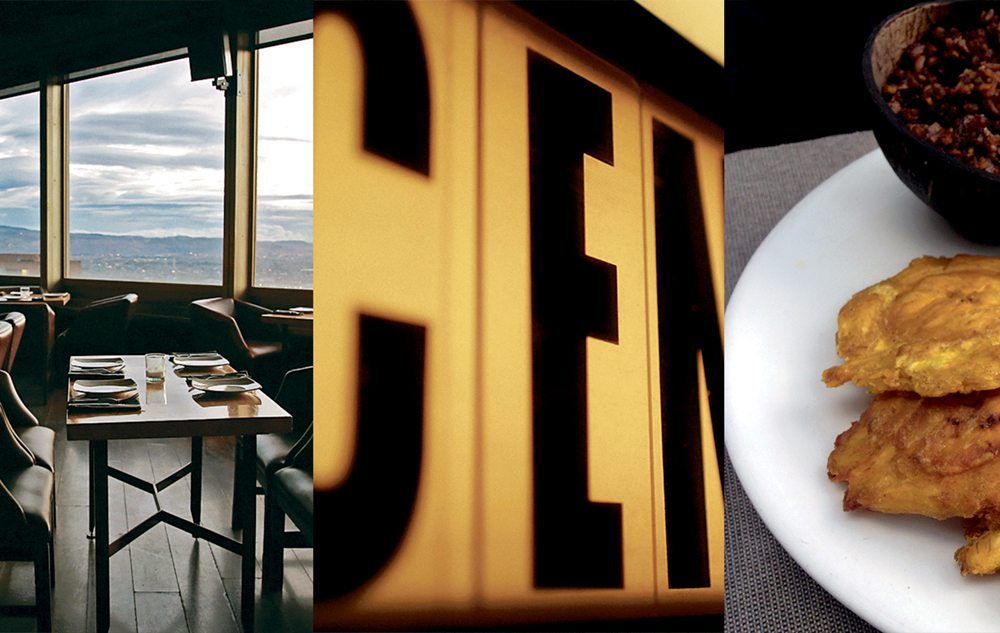 Guests heading to Céntrico have their own line before being hurled up 41 floors to the rooftop of one of Bogotá’s tallest buildings, the antiguo Hilton, and an office tower populated with start-ups, news agencies and the National Police anti-kidnapping division.

Once the only Hilton in a capital serviced by Braniff and Eastern, the building has seen its share of owners, renovations – except for those time-tested elevators which have moved entire cities from the ground skywards, including more recently, throngs of midnight revellers heading to Cha-Cha Club. From the disco days of an after-hours club has emerged a genteel restaurant with a very Colombian menu and impressive views to match. Upon entering Céntrico, the panoramic of a verdant Sabana de Bogotá captivates, and becomes a constant theme throughout my lunch with friends.

It used to be that to dine at high altitude in Bogotá meant taking the cable car up Monserrate – but thankfully – Céntrico has changed all this. Besides taking in the views, the restaurant keeps to a menu that honors the best of regional cooking and what makes Colombia so diverse gastronomically.

I am always drawn to the coast, especially when it comes to bite-sized carimañolas (yuca nuggets filled with farmer’s cheese) and the region’s favorite snack arepa de huevo. For starters, Céntrico presents a dozen Colombian classics, including crab meat empanadas, lentil soup, a house speciality chicharrón céntrico, chorizos a-la-Santa Rosa and Caribbean ceviche. It’s tough choice, but we settle on the crab empanadas and plate of the smoked sausage with recipe from Santa Rosa de Cabal, served with fried plantain, lemon and chimichurri relish. The starters range in price from $10,000 to $20,000.

They disappear faster than the elevator returns to earth. Clouds roll past us as we browse the main section of the restaurant’s well-conceived menu. The wait staff are attentive, but not as intrusive as the rain forming on the horizon. From an out of view kitchen plates emerge, as do cocktails, beers and tropical fruit juices. We are in for a treat, and nature is playing its part, both on the plate and horizon.

There are 17 mains that span the breadth and width of the nation. We examine each item carefully, deciding to share several of them, starting with a very Pacific Pescado Empapelado ($38,000). Essentially this plate consists of steamed white fish in a coconut bisque mixed with shrimp, mussels and hint of brandy. The plate is accompanied by criolla potatoes and yuca. After a short wait, the dish turns up at our table. We zoom in on the cauldrette and pass around niceties. Whoever remarked “No, you go first” essentially missed out on an exquisite meal. We were all dumbfounded by a remarkable dish, perfectly executed by the restaurant’s executive chef Francisco Pinzón. After a delectable foray with fish we turn our attention to a Cartagena hallmark, posta Cartagenera. Called a posta Céntrico this black topside beef comes accompanied with coconut rice and a house salad. The braised meat was generously covered in a sweet panela gravy, once again, highlighting Céntrico’s determination to do justice to Colombian cooking. We shared a Quinoa and avocado salad to add some green to the carbs.

This centrally located restaurant is neither pretentious nor fussy fusion. It stays the course of a gastronomy which pre-dates Columbus’ arrival in the New World. The restaurant is also a lounge and bar for that after-work drink, date, flaming romance or celebrating a special anniversary. From Wednesday night to late night Saturday, the focus is on the music – with bar snacks and live DJ. To get into the groove, Céntrico has a good selection of wines from Australia, Italy, California, Argentina and Chile. For watching the Bogotá sunset go for a cask aged single malt – as you’ll feel that much closer to stars. And in terms of Céntrico’s food – it was pretty stellar at these heights.