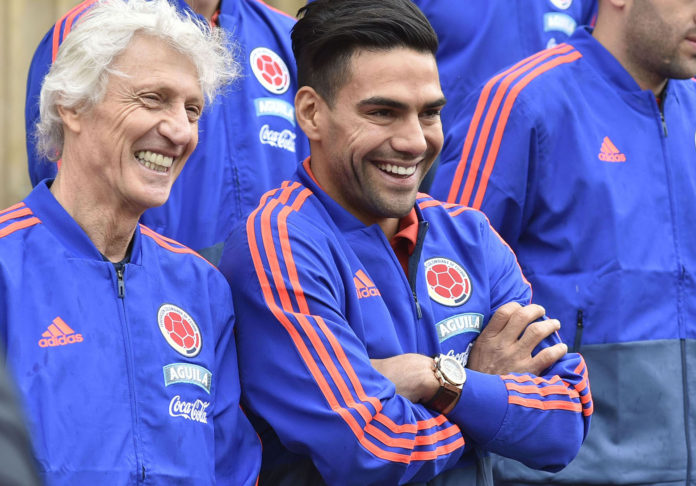 Colombia’s national football team makes it debut Tuesday, June 19, in FIFA World Cup Russia and after a contentious presidential runoff election, it’s time to sit back and enjoy La Selección Colombia as they face Japan in the 28,000-seat Mordovia Arena in Saransk.

After their impressive showing in the FIFA World Cup Brazil 2014, under Argentine coach José Pekerman, by reaching quarterfinals, Colombia in this tournament is ranked in Group H, and also a strong favorite to once again reach quarter finals. But in order to do so, we first must face three adversaries: Japan, Poland and Senegal.

On Tuesday at 7 am local time, La Selección meet the Blue Samurai and strikers Shinji Kagawa of Borussia Dortmund and Shinji Okazaki of Leicester. As it’s an early riser game, chances are you’ll be cheering on the team with hot coffee, pan de yuca and steaming almojábana cakes. Many of Bogotá’s cafés and bakeries, from Brot (Calle 70 and Calle 81) will have television screens mounted for guests to enjoy the match, before getting to the office. And two of the city’s popular dining establishments, Plaza Andrés and Andres D.C. will offer a typical Colombian breakfast with our champions. And Maison Kayser, the bakery founded by the legendary breadmaker Eric Kayser offers guests a special football menu where you can combine brioche with the balón.

If team Colombia manages to conquer the Blue Samurai, our next match is equally critical as two FC Bayern Munchen strikers, James Rodríguez and Robert Lewandowski, enter the duel on June 24 (1:00 pm Bogotá time) in the capital of caviar, Kazan. The Arena should be packed with fans of the White and Reds, applying pressure to Colombia to at least tie. Team Poland has qualified eight times in the World Cup and finished third on two occasions, in 1974 and 1982.

Considered our strongest rival in Group H, this match is one you won’t want to miss, and as it will be played on a Sunday (1:00 pm), a great excuse for spending the afternoon over pitchers in your favorite Zona Rosa pub.

Our last contender in Group H is Senegal with the game scheduled for June 28. Making their second appearance in a World Cup and ranked 28 by FIFA, the Lions of Teranga have plenty of bite, and in their 2002 debut, memorably reached quarterfinals beating defending champions France in the group stage. In the Colombia game, the west African forward Sadio Mane (Liverpool) presents the greatest threat to our defense. The match begins at 9:00 am and will be transmitted from the Samara Arena, in the Russian Oblast. If La Selección can send the Lions crawling home, then we go to the knock-out stage, beginning with the last 16 and quarter finals. With 32 teams heading to Russia for the June 14 kick-off, Colombia has a fighting chance to mend past wrongs, and bury its reputation as a team that can’t move past quarterfinals.

In a country with 11 time zones, the group round of the World Cup means all games will be broadcast early in the morning, except for the key match against Poland on June 24.

Until we know which countries, and in which of the 12 stadiums, we will be playing when we reach the last 16 and, hopefully, quarterfinals, Russia 2018 so far has been quite zanahoria – cheering on La Selección with alcohol-free beer, mugs of coffee, orange juice, and no shots of vodka.

Bogotá’s Institute of Recreation and Sports (IDRD) has installed giant flat screens in 12 city parks so that if one doesn’t have time to sit in a restaurant, you can grab a bench outdoors. For the Japan match at 7 am., Parque Cayetano (Clle 41B Sur with 81), Parque Virrey (Cra 15 with Calle 88), and Parque Santander (Cra 7 with Calle 16).

Russia 2018 could well be our last international tournament with coach José Pekerman  and surely, our players will deliver the best of the game, especially after he pulled Colombia back from the brink of World Cup oblivion. After 16 years when we didn’t make the grade, this month is all about scoring and knowing there’ll be some funky dance by Cuadrado and Rodríguez.