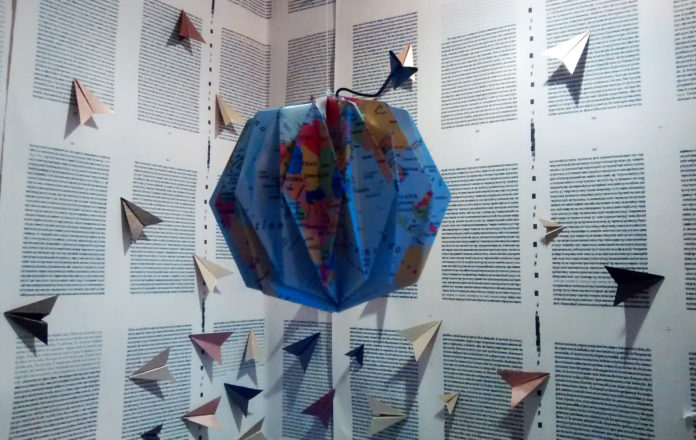 Welcome to a place where the light fixtures, wall hangings, decorations, and dinner menu are all made out of folded paper. It isn’t just the many embellishments that make Café Origami unique, however. What makes it most memorable is the chance to unleash your creativity over dinner by folding paper and transforming the meal into your very own origami show-and-tell.

Mónica and Adriana Niño, the owners of Café Origami in Bogotá’s bohemian Macarena barrio, first thought of combining this ancient art with a Japanese menu. But in time, the idea of a coffee house based on paper began to take over.

Even though origami is a favorite pastime for children across Japan, the possibility of creating complex three-dimensional paper creations over coffee seemed to appeal to everyone. So the two entrepreneurial sisters created their origami-concept café, a first in Colombia.

Paper, like rice cultivation and gunpowder, originated in ancient China before becoming part of the Silk Road commodity trade. The pathway carved a route from the Mongolian plateaus through Mesopotamia and across the Caspian Sea, eventually reaching the Adriatic and the merchants of ancient Venice.

Mónica and Adriana were inspired by stories of this Silk Road journey and decided to pinpoint the middle ground of this legendary route: Iran.

At Café Origami, where Iranian cuisine blends with traditional desserts and freshly brewed Colombian coffee, there are many delicious (and vegetarian) options, including kibbeh, gyros, and kebabs. They even make an Iranian candy called nabat of crystalized sugar in different flavors and colors on a wooden stick. But the most crowd-pleasing dessert that customers ask for is their signature lemon cheesecake.

Before they bought their first coffee machine on credit six years ago, the art of folding paper had already become more than a hobby for the owners of Café Origami. That is obvious as soon you walk into their establishment and see the paper balloons, elephants, flowers, birds, and other ornaments hanging from the ceiling, gracing the walls, and resting on every exposed surface.

Today, their hard work has paid off and their venue has expanded to occupy two floors in this hip neighborhood on the rise. Besides offering excellent food and local-origin coffee, sisters Adriana and Mónica still teach the Japanese art on Sundays and offer short courses for kids or anyone who wants to learn origami while waiting for a kebab or “Latte Iraní.”

Just like folding paper, Café Origami is always changing. So if you decide to come back for seconds, you will be greeted to an entirely new experience of paper, food, and design.