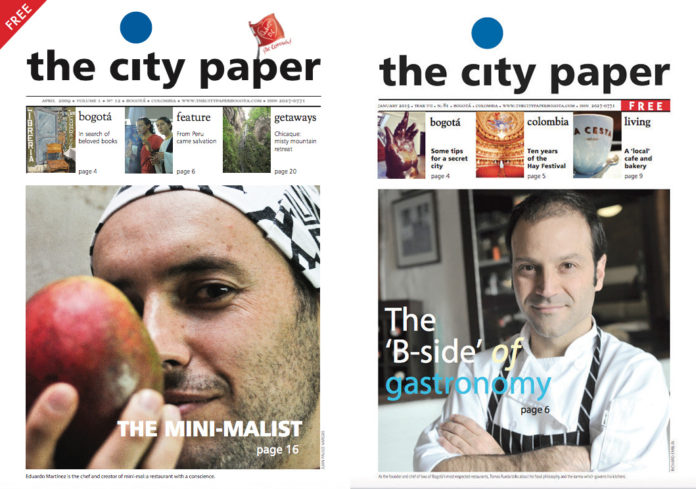 The City Paper has covered plenty of gastronomic terrain during a decade in print, and this publishing achievement, would not have been possible had it not been for the unwavering support of restaurateurs and chefs who we have profiled in these pages. The first chef to make an appearance in the newspaper was Daniel Kaplan in our first edition. In April 2008, “Danny” was at the helm of a Macarena restaurant called 29 Cocina+Bar that served contemporary cuisine infused with Indian and Asian spices. The highlight of this beautifully decorated venue with wall tapestries were the cocktails and the Thursday Happy Hour. Kaplan is now the executive chef of two highly recommended Bogotá restaurants – La Fama and Ugly American. If you’ve been to La Fama, you’ll know that this is a small corner of West Texas in Chapinero Alto, home to the best BBQ ribs in the city, and at Ugly, Daniel oversees a kitchen that delivers on a great burger. Enjoy the Sunday brunch with all you can drink mimosas and corn bread.

When we heard about Mini+Mal back in June 2008, a small restaurant that was serving (and still does) dishes inspired by the ingredients of the Colombian Pacific in order to help vulnerable communities, we needed to interview its head gastronome, Eduardo Martínez. For more than a decade, this chef has been cooking with a conscience to help bridge the gap between the rural and urban. As a pioneer of a food-change-lives philosophy, Eduardo became the first chef to grace our front page (April 2009) and his dishes reflect the best of Colombia’s diverse cuisine: a commitment to those who harvest with sustainable practices the ingredients that go into a seafood cazuela, sushi plantain roll or Tumaco green curry. And diners always get a treat at the end of their meal – the latest edition of you guessed it, The City Paper.

Bogotá met Belgrade in 2009 when Katarina Markovic invited us to try traditional Serbian recipes in her Macarena- based Beograd. Serving guests a goulash, pork Prebranac and Serbian roast since 2005, Markovic is a culinary survivor in a city where restaurants open and close in a flash of a pan. So, take advantage to dine among Orthodox kings and pictures of the rolling hills of Rtanj.

Donostia on a steep and quiet street behind the country’s National Museum, (Museo Nacional) has been flying a gastronomic flag for 15 years, thanks to its visionary chef Tomás Rueda. Tomás has been so influential on the city’s gastro scene that he opened Tábula, on the same street. Here, Colombian dishes are slow cooked and always meant to be shared. Tomás is a big believer in giving guests a generous meal, where robust flavours meld with gastronomic delicacy. Tomás made the front page of The City Paper in January 2015 for his ecologically friendly cuisine, concern for sustainable farming methods and, above all, a respect of Colombia’s rich culinary traditions.

Donostia and Tábula share a colonial house on Calle 29Bis below Carrera 5.

Arun Pal left his native Calcutta on a bicycle in 1971 to attend the inauguration of the 1972 Munich Olympics. He never looked back and ended up in Bogotá to raise a family and inspire in Bogotanos a love of India and the best of India, its food. At the helm of India Gourmet and now, the recently inaugurated Namaste, Arun is an inspiration to those who are fortunate to meet him, try his naan, samosas with mango pickle from his farm in Guamo, Tolima. As a defacto Ambassador of India in Colombia, Arun is also a social benefactor, sponsoring a children’s Holi festival every year and where money raised from his vegetarian and non-vegetarian buffet is donated to the victims of the mudslide in Mocoa, earthquake victims of Nepal, and drought-stricken children in La Guajira. Don’t miss out on Arun’s family recipes – tamarind mutton and shrimp masala.

As we aim for another decade, there are many exceptional chefs that made The City Paper and deserve recognition (Andrew Blackbourn, Alvaro Clavijo, Harry Sasson, André Tarditi, Alejandro Gutiérrez, to name a few), as well as so many who have yet to be discovered and reviewed. But, this article wouldn’t be complete without a mention to the waiters of Watakushi, a Leo Katz establishment, in the Zona T. The impeccable and courteous waiters of one of the best Japanese restaurants in the city have been taking care of our newspaper since day one with lots of genuine cariño. The same can be said about two other dining landmarks, Andrés Carne de Res in Chía and Andrés D.C. Gracias!