It is a contradiction in more ways than one. Even its name is a misnomer, if you take it literally in Spanish as meaning ‘under construction’ or a work in progress. And it might take the tourist to the city a little explaining that this restaurant – EnObra – in the heart of Bogotá’s bohemian La Macarena neighborhood – has been fully functional for more than 7 years and the only construction you’ll see is out on the street.

Besides being a restaurant – which offers an eclectic menu of savory dishes – it is also a bar where people go to lounge around, mingle and meet in an informal environment with a touch of warehouse elegance.

Founded by the same partners who run one of Bogotá’s most ‘in’ nightclubs, Invitro, EnObra caters to a slightly different crowd – the thirty something’s. Those upwardly mobile professionals, who like to dress in black, eat samosas – which at EnObra are delicious- and sip on an Argentinean Malbec while keeping their blackberries within close range of editors and aspiring film directors who tend to flock to EnObra on Monday nights when documentary ‘shorts’ are projected.

The music at EnObra sets the pace for the night – people start arriving around 9:00 in the evening – with a good selection of lounge tracks from the Buddha Bar collection, as well as an alternative 90’s mix of the best of the British ‘invasion’ groups, making you feel that you are back home on the old continent or in a very trendy Montreal-style loft with high ceilings, red velvet curtains and polished concrete floors. On Fridays and Saturdays, several DJ’s liven up this renovated bodega and the place takes on a festive atmosphere.

EnObra’s drinks and dinner prices are reasonable and the plates are prepared right then and there in an open kitchen next to a well-stocked bar. There is a good salad selection for vegetarians, such as the cous cous salad made with paprika, cherry tomatoes and black olives.

Customers can also order half-portions of every plate on the menu. The food is well presented and the service excellent.  Best to make reservations, though, as the venue gets very busy on Thursday, Friday and Saturday nights, and tables are limited. However, there are plenty of comfy leather chairs and sofas while you wait for a table, and the bar is also popular.

A glass of Grey Goose vodka on the rocks goes for $18,000 pesos, and the Vodka Mandarin costs $14,000. There is a good selection of fine rum and gin in addition to an excellent list of hard to find imported German beers, including the Erdinger Black, the dark Pikantus and the Rubia. For a more traditional beer, try the Lowenbrau from Munich.

House favorites – while you converse with friends or meet new ones – are the meatballs, the samosas filled with pipián sauce, the oriental shrimp or the grilled calamari with hot chili mayonnaise. The portions are not large, so you can order several dishes at once. Over the next several months, EnObra will introduce new plates to the menu, such as a Peruvian ceviche and smoked trout.

EnObra makes for a memorable night out. The ambience is ‘hip’ but not pretentious. It is well worth making the trip from the north of the city to La Macarena, and there are always plenty of taxis available if you have had just one too many drinks. The helpful and accommodating staff will call one if you are not able to. In a city awash with new bars, EnObra is definitely in the ‘best of’ category and is more, so much more, than a work in progress. 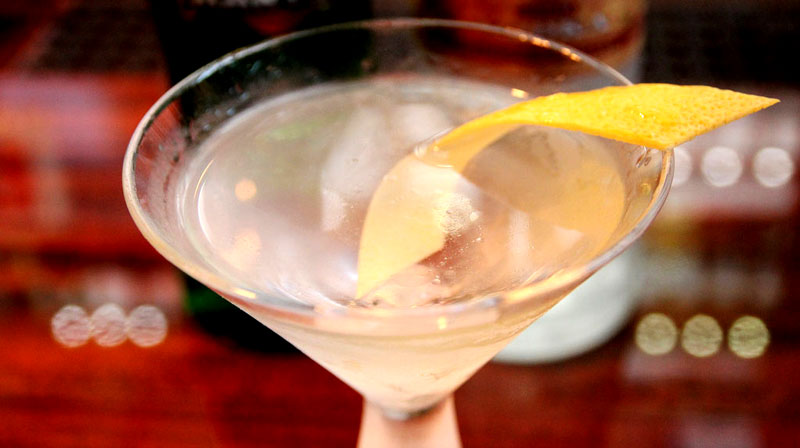