Walk into a Chinese restaurant in this city and chances are you’ll experience one of two things. Either you pick a Colombian establishment with a low-lit, chic interior to dine on bland imitation food. Or, you go with your gut, and pick the dingier looking establishment with a Chinese person behind the counter. The “authentic” décor – vases, wood-carving, framed tapestry of a goldfish, lanterns, and, of course, the color red everywhere – assures you the food, too, will be authentic. But you’re let down, first by the thin menu, then by terrible food.

At first glance these two restaurants appear worlds apart. But to me, a gringo and a self-proclaimed Chinese food glutton, they are one and the same: a deception. As a homesick expat of a country that has more Chinese restaurants than McDonald’s, I look to Chinese cuisine for culinary comfort, only to be consistently disappointed. I grew wary of my two options. No matter how authentic they promised to be, what I was looking for was American Chinese cuisine, not the two varieties of Colombian Chinese food being offered.

Chinese cuisine was first introduced to the US by Cantonese laborers in mid-19th century California. Over the next century and a half, new waves of Chinese immigrants coming from various provinces brought with them distinct cooking styles. Traditional dishes were tweaked and new ones, like Chop Suey and General Tso’s Chicken, were invented, as the cuisine evolved to cater to American tastes. By the 1970s more white Americans could be found eating in a Chinese restaurant than Chinese.

What I was looking for was so remarkably North American, it would have been odd to find in South America. After all, it isn’t a corporate product like Pepsi, which can be marketed and distributed here, but a rich culinary tradition that comprises mostly small business owners.

I had almost lost all hope when, one day, while walking among the ultra posh restaurants of Zona G, I stumbled upon Alice’s, whose modesty clashed with its surrounding competitors. Despite my near loss of faith, my stomach urged me to ask for a menu. Written in English and Spanish, it promised Mandarin and Szechuan cuisine, and was full of appetizing dishes I had never before seen in a Colombian Chinese Restaurant. Dishes like General Cheng’s chicken, Crispy Duck, Spiced Mongolian Beef, Kung Pao Shrimp, Spiced bean curd, Moo Shu Pork, and sweet pungent shrimp.

While offering exquisite American Chinese cuisine, Alice’s Restaurant is not unlike option two in appearance. Only the man behind the counter, Alex Hsu, is not Chinese, he is Taiwanese and an American Citizen. Born in Taiwan, Alex moved to Colombia in the early 1980s. In 1985 he received his green card and went to California, the birthplace of American Chinese Cuisine, and worked as a chef in Los Angeles. Five years and five restaurants later, having learned various cooking styles, Alex opened his own restaurant in San Fernando Valley. But with tough competition and damage caused by an earthquake in 1994, Alex closed shop and returned to Colombia.

In 1995 he opened Alice’s, named after his mother, and the first restaurant in Zona G. Targeting a wealthier clientele, “business was slow because of the Colombian attitude toward Chinese food,” explains Alex. “Colombians are attracted to fancy restaurants.” But Alex was offering something no one else in Bogotá could back then: true American Chinese cuisine, of which a low-key mood and kitsch are part and parcel.

Since 2001 business has been steady. “Now it’s great,” he says, with half of the revenue coming from sit-down clients and the other from deliveries. While there is competition for the same clientele from restaurants offering gourmet Chinese, Alex doesn’t seem concerned someone might copy his menu. “They can’t, nobody else knows how to cook these dishes.” Keeping his culinary secrets well guarded, he has taught just one of his Cantonese cooks everything he knows. And if you can’t find time for sitting down at Alice’s get the another key aspect of authentic American Chinese, the Take-Away. 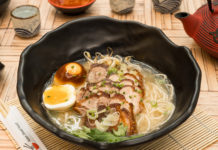 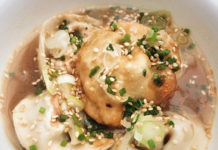