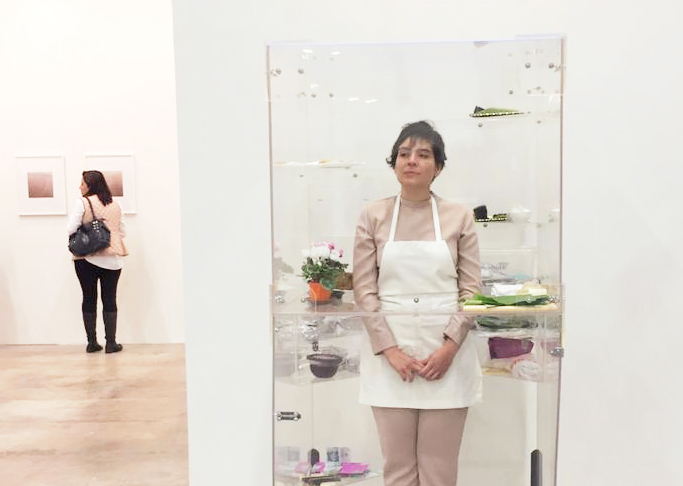 If art is life, then art needs to be fed. And the visitors to the recent International Art Fair of Bogotá (ARTBO) did not go hungry – or thirsty. On opening night, a table full of appetizers was set up near the back of the exhibition space, and outside, visitors clamored for burgers, tacos, and crepes at various stands.

Started in 2004 as an initiative by the Bogotá Chamber of Commerce (CCB) to provide a business network platform for the visual arts cluster, and a showcase of the city-region, the 15th edition of the fair ran from September 18 to 22. There was libation to be found within the art space, as well. Artist Felipe Villamil, wearing a white lab-style coat and a matching hat that said “Cuando la sed mueve montañas,” scooped out and served orange juice from what was effectively a fish tank. A thick slab of ice in the shape of a mountain sat in the middle. The exhibit was called Pecera. “I was inspired by the dispositivos (devices),” said Villamil. “The stands selling juice in the streets in Bogotá. And I wanted to call attention to the Orange Economy.”

The Orange Economy is another word for the creative industries in a given country. It is also a system of regulation of the arts in Colombia instituted by President Iván Duque last year. It applies to creators of physical, digital and performing arts in the country, whether they be writers, painters, dancers or software designers. The Orange Economy protects intellectual property, which increases artists’ productivity and generates more income for Colombia’s GDP.

Not every Colombian artist likes the Orange Economy. Some creators dislike the conversion of artwork into consumable goods and services. Villamil said he isn’t comfortable with the proposal’s focus on productivity and income generated by artists. He wants people to reflect on that idea when they experience Pecera. “This artwork is productive. It’s a work of art that provides people with something to drink.”

Villamil was also inspired by global warming and the positive psychology movement. He said he wanted his exhibit to make people reflect on different ways that mountains can be moved. “Normally, people say faith can move mountains. Why not thirst?.”

Another exhibit nearby focused on food. A young woman, working within a glass box about three feet square and six feet high, prepared food and placed it in small Tupperware containers, wearing an apron and a plain tan shirt and pants. Artist Martha Lorena Parada first displayed her living art exhibit in the streets of Bogotá. “People were giving me money,” said Parada. “That was frustrating. I didn’t want money. I wanted people to think.” The exhibit called Ejercicio de máquina dispensadora de alimentos, is meant to create a dialogue around the food we eat and where it comes from. “I started with the idea of whether work can be art,” said Parada. “Then I became fascinated with the theme of food in art.” Parada especially wanted to cast light on the idea of pre-packaged foods appearing in vending machines for public consumption.”No one makes that food,” she said. “No one knows where it comes from. I want people to think about how we eat in public spaces.” Food for thought, indeed.