Each boldly colored statuette draws inspiration from classic toy figurines. The nostalgic characters are interspersed with replicas of world landmarks meant to represent souvenirs from vacations – the “toys” of adults. Cool and relaxing, the atmosphere is a  shrine to something from another era, or another state of consciousness. “I’ve been interested in dreams as part of my creative process for a while,” explains Nadín of the inspiration behind his Oniria series, a title referencing the Greek word for dreaming. “There is a technique of yoga that helps you to dream more consciously, even artistically, and things like these toy-like objects always show up in my dreams.”

Nadín Ospina gained renown as an artist with visually jarring sculptures combining universally recognizable pop icons like Mickey Mouse and Bart Simspon with pre-Columbian artwork in a critique of the cultural homogenization that continues to dramatically reshape Colombian life. His most recent work takes a decidedly personal tone, focusing on dreams and memories, while not totally dispensing with the themes that define his career and his own past.

Born and raised in a neighborhood known as Galerias, one of Bogotá’s largest and oldest commercial centers, Ospina grew up on the frontlines of a cultural invasion. As North American and European influences gradually popped up around his home, Ospina became fascinated with the appliances, restaurants, department stores and, perhaps most importantly, toys that arrived from abroad.

Tastes began to change, along with home décor, and Ospina remembers the mass-produced ceramics and miniature figurines that filled houses like his grandmother’s, an influence clearly felt in the Oniria exhibition. Despite the turbulent change surrounding him, Nadín remembers his childhood as happy and carefree, a sensation he recreates in cast metal, immersing viewers in a playful and innocent space.

The innocence of youth wore of quickly as Ospina began college under pressure to pursue what his parents deemed a respectable career. Initially a medical student, Nadín realized he was on the wrong path while caring for an injured uncle. The blood and stress of the situation proved more than he could comfortably handle. Despite a lifelong fascination with art, clarity finally arrived in a dream. “I kept hearing the word ‘arte’ over and over one night, and I thought ‘why not?’” says Ospina, adding another layer of meaning to the dream-inspired exhibition.

Unfortunately, his parents were not so easily convinced, and his father furiously argued that studying art was tantamount to throwing his life away. Even his new professors tried to discourage him from continuing his studies, suggesting that his future in the art world was dim at best.

“The head of the art program told me I should study something else so I wouldn’t waste any more of my parents’ money,” Ospina remembers. “This was the director of the program. They should have encouraged me.”

Encouragement came soon enough, and Nadín’s critics were silenced when a curator from the Medellín Museum of Modern Art selected one of his pieces for an exhibition, where it received an honorable mention. With a foot in the door, Ospina began working harder than ever, and he cites the period between 1982 and 1985 as his most productive, though the solitude of working outside the university “bubble” took him somewhat by surprise.

Nadín credits his methodical, almost obsessive nature as an artist to the rigorous demands of his Jesuit schooling. Though less marked now than in the beginning of his career, his steadfastness occasionally earns him criticism for refusing to let go of ideas and inspirations.

On the contrary, Ospina wonders if other Colombian artists might in fact be stuck, suggesting that, “they seem kidnapped by the situation of the country.” Ospina avoids explicit political messages, though the artist acknowledges that refusal to address Colombia’s socio-political climate becomes a statement in and of itself. With the showing of “La Suerte del Color” one sees a mature artist at peace with the inevitability of multiculturalism.

That peace seems reflected in his personality.  Admitting he was perhaps not always so relaxed, Nadín attributes much of his grounded attitude to his appreciation of both family and home. “I used to be even more obsessive, but I’m a little more relaxed now. It’s liberating to realize what’s important,” he notes with genuine optimism.

Of course, some things still bother Ospina, most notably the elusiveness of a defining cultural identity in Colombia. The nation boasts an astonishing diversity among its various regions from the Amazon to the Andes, and despite thousands of years of rich cultural tradition, many Colombians look up to foreigners. “The high classes want to be French, the middle class from the United States and the lower class Mexican,” notes Ospina jokingly, “but nobody wants to be Colombian.”

A similar frustration inspired his original focus as an artist, creating hybrids of universal characters and icons of an ancestral Colombia untouched by outside influences.

The quest to strengthen his nation’s cultural identity became tangible when efforts to accurately recreate the masterpieces of pre-Columbian civilization took Ospina to San Agustín, a small town known for producing accurate replicas of indigenous art. The town’s residents sold the pieces as souvenirs for tourists and occasionally as originals to unsuspecting buyers, but the civil conflict almost completely destroyed their business.

“When I arrived at San Agustín, the town was in terrible shape. There was no tourism due to problems with the guerrillas, but they started working again for me and we started bringing back their considerable talents,” says Ospina.

Like the stone artworks produced in San Agustín, the figurines of Oniria were produced as copies in Colombia. Each figurine was replicated over and over again from molds based on versions of the toys brought from Europe and North America, losing detail and quality but gaining a unique character.

His exhibition at El Museo celebrates the same metaphors that have defined his career, reflecting on the ever-changing culture of Colombia, degraded in some regards and strengthened in others. “There is some loss of our identity for sure, but our culture is strong and I think it’s a two way street. The third world is also infiltrating the first,” reminds Ospina. “The reality is that the future is a fusion of cultures and I think that, overall, that’s good.”

Not quite surrender but hardly a call to revolution, it’s a fitting insight for an artist in a place of peace and profound personal awareness, accepting of realities while remaining keenly observant and gently critical. Striking a delicate balance between ideas and aesthetics,  the “La Suerte del Color” collection is grounded with an intentionality that compliments his subject matter. Like the artist himself, the exhibition is as universal as it is undeniably “Colombian.” It’s an ode to a nation that believes in creative dreams  and can “take the Mickey” at our multiplicity of realities. 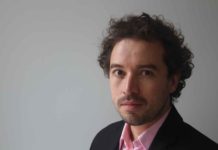 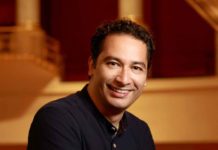