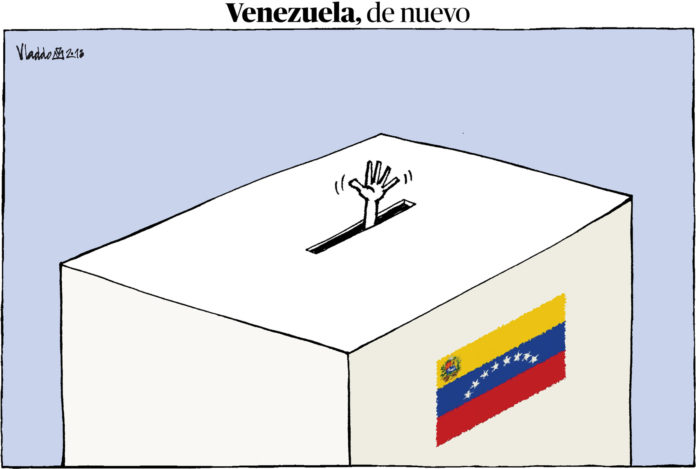 This is the big art weekend in Bogotá, with the Bogotá Chamber of Commerce hosting ARTBO Fin de Semana. Among the 67 gallery spaces participating in this third edition, is the Museum of Modern Art of Bogotá – Mambo – with a selection of works by the editorial illustrator Vladimir Flórez best known as “Vladdo.”

Vladimir Flórez’s career as a graphic designer and political cartoonist spans 30-years, a time-frame chosen by the Museum of Modern Art of Bogotá for its most recent show titled Vladdo: Opiniones no pedidas, or as it reads in English, Vladdo: Opinions not wanted.

Never at a loss for words with his column in the country’s leading daily El Tiempo, or ink and paper, for his politically charged cartoons in Semana magazine, Vladdo, is best known among millions for being Aleida. Created as a fictional character to give women a commentary on everything from relationship issues to health concerns, education and running a household budget. In 2017, Vladdo’s “alter ego” turned 20, and is still “looking for love.”

Born in Bogotá in 1963, Flórez trained as a graphic artist before joining La República and El Siglo newspapers in 1985. He became a visual commentator and cartoonist at a time in this country’s history defined by the Armero mudslide, the storming of the Justice Palace by the M-19 guerrilla and rise of the powerful Medellín cartel. Even though Aledia rarely discusses politics with her compatriots, she continues to influence public opinion with wit and sensitivity and is the leading lady of an exhibition that also profiles Vladdo as an expert typographer, award-winning newspaper designer and crusader for freedom of expression in print, radio and television.

Vladdo is a journalist who gets-under-the-skin of many politicians and is fierce and fearless in the face of censorship. Exposing in his illustrations and words uncomfortable truths, he always manages to make readers laugh, among them, those in the bulls-eye of his vitriol. Taking on the powerful and influential requires satirical stamina, and after three decades, Vladdo continues to give voice to the common man and woman, expressing their aspirations and frustrations with the political elites and the absurd cloaked as truth.

The exhibition begins with the Paredón section where the illustrator presents a selection of cartoons depicting the political moments in the lives of Colombia’s last six Presidents. From the violence generated by the country’s drug mafias to the displaced and victims of the internal conflict, with the stroke of his pen, Vladdo crystalizes the national consciousness on the page. In Tierra Caliente, the many ironic facets of Colombia are represented mostly as “banana republic” and told through its “famous people.” Then, a special section for Aleida in Muy ella and lastly, a collection of editorial projects and publications where Vladdo has left his indelible markings. Until June 2.