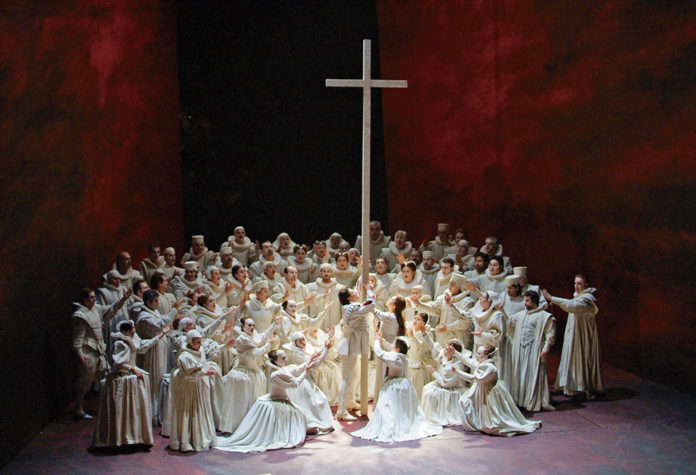 If there is one composer who could adapt the words of William Shakespeare to music, that would be Giuseppe Verdi. Although the artists lived two centuries apart, and spoke different languages, both shared the spark of genius. Attempts to put Shakespeare’s words to music have mostly failed, claim experts, but the three that Verdi completed in his lifetime – Macbeth, Otello and Falstaff– are considered masterpieces as they are faithful to the bard’s original manuscripts. Verdi, the composer of a new Italian nation, focused on the importance of writing for particular per- formers, an approach similar to the challenges faced by Elizabethan playwrights.

Following the success of last year’s Macbeth at the Teatro Colón, the emblematic theatre of “all Colombians” presents Verdi’s Otello for four nights, an event that promises to be of world-class stature, given the cast, stage director and conductor.

First performed in 1604, Shakespeare’s Othello follows a ‘Moor’ in Venice through a plot of love, betrayal, jealousy, and ultimately, death. In keeping with Shakespearian tragedy, Othello, like King Lear and Hamlet, begins to question his identity and capacity to command others on the field of battle. Iago is the foil who, through deceit and vengeance contaminates the Moor’s mind with a hideous suspicion that his wife Desdemona is being unfaithful.

The issues Othello confronted when he first walked onstage remain present in modern day society. His fall from grace is not just a character flaw, but is rooted in corruption and the irrational quest for power. As the ‘Moor’ transforms from being a respected member of his community, to a despondent madman and murderer, Verdi understood that the perennial source of conflict is not just an exclusive theme to theatre.

Shakespeare’s drama of racial intolerance and sexual taboos captivated Verdi’s imagination, even though a half-century earlier Gioacchino Rossini composed an Otello, considered at the time, to be a distant interpretation of the tragedy. Since its premiere at La Scala in 1887, Verdi’s Otello has relegated Rossini’s version to the bottom of the musical repertoire. An opera lover’s opera and masterpiece that can be set to different historical periods, the Colombian premiere of Otello coincides with a production at the Royal Opera House in London.

As the highlight of a Shakespeare season, Otello marks a return to the Colombian stage of Willy Decker, the celebrated director of Barcelona’s Liceu Theatre who in February, staged a critically acclaimed ‘La Traviata’ at the Metropolitan in New York.

Otello has seen unparalleled success in the 20th century and tends to be met with unique directorial interpretation when adapted for modern audiences. Despite the fresh ideas regarding stage design, the Colón’s Otello will be very similar to the production Decker directed in 2006 at the Liceu: a strikingly minimalist approach to the classic opera.

Thinking outside of the box, Decker envisages his actors on a sloping platform with simple decoration to draw attention to the dialogue, and focus the audience’s senses on the music. The sober-toned scenery will not distract from the National Symphony Orchestra of Colombia, nor the powerful voices of the talented singers under the baton of Briton Hilary Griffiths. Griffiths’ repertoire includes more than 200 performances with the Prague State Opera including Verdi’s Nabucco, last November.

Otello involves a cast of distinguished international performers. German tenor Zoran Todorovich, who has already played Otello in various successful productions throughout Germany, will share the spotlight with several other well-known European soloists, such as Gulnara Shafigullina, the Russian soprano who captivates as Desdemona, and Nikola Mikhailovic, the Serbian baritone who will star as the self-important villain, Iago. In addition, the Opera Choir of Colombia will accompany these singers on stage, bringing over 200 people into each scene.

The Colón’s groundbreaking production of Otello shows the dedication of the Ministry of Culture to stage performances on par with the most important opera companies in the world. The story of the ‘Moor’ who falls in love with a beautiful Venetian girl will delight audiences and accompanied by a score considered one of the timeless works of opera.

Tickets are available at the Teatro Colón’s box office or through the online agents www.tuboleta.com. Performances on June 23, 27, 29 and July 1st.