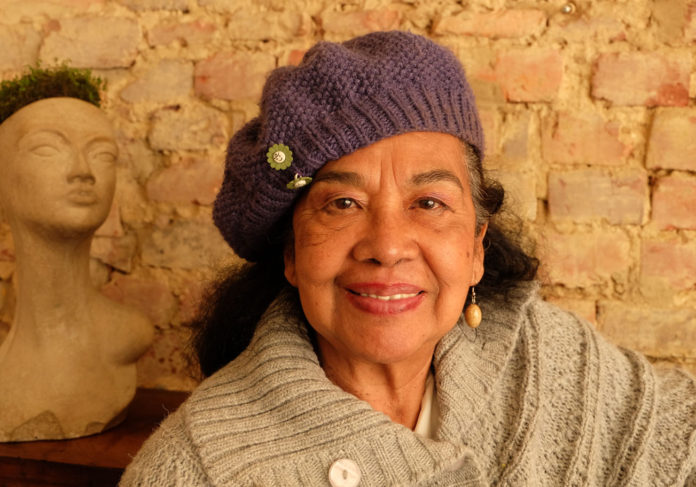 It was as if everyone from Gabriel García Márquez’s fictional town Macondo were swooping down the stairs of Stockholm City Hall at the writer’s Nobel Prize banquet in 1982.

Some 200 Colombian musicians and artists, many of them costeños, had joined García Márquez in Sweden to celebrate his Nobel Prize in Literature. But one person stood out—a barefooted, afro-indigenous woman who astonished the crowd with her singing and dancing on the hall’s marble floors.

The woman was Sonia Bazanta Vides, better known as “Totó La Mom- posina,” and every surge of her indomitable voice was saturated in history with deep-rooted links to the inland tropics of Colombia’s Caribbean coast.

“Afterwards, the majordomo came and thanked us all for coming,” Totó recalled from a restaurant in Bogotá’s Chapinero Alto district. “Then he said, ‘the Queen of Sweden has a special message for Totó la Momposina.’”

That moment, an extraordinary recognition of Totó’s talents and the mu- sical traditions forged over generations along the banks of Colombia’s Magdalena River, has stayed with the singer for 34 years, even as she has risen to fame and performed around the world.

And on December 6, the global acclaim for Totó will reach new heights when she joins the ranks of Bob Dylan, Mercedes Sosa, and Bono as a member of the Order of Arts and Letters, one of France’s highest honors for distin- guished “contributions to arts in letters in France and around the world.”

Even as Totó nibbled on a salad in Chapinero, she had eyes like a fire- cracker and a smile that seemed to transcend time. Her mind was on her concert the following night at Bogotá’s Royal Theater. She still didn’t know what songs she would sing, and she confessed that her nerves were already getting to her.

“The day that I cease to be nervous before going on stage, I will retire,” she said. “Because at that point music will have become mechanical.”

Born in 1940 in Talaigua Nuevo, a village on the Magdalena River about 100 miles southeast of Cartagena, Totó, a fifth-generation musician, grew up surrounded by the musical traditions of “la costa.”

Her father was a shoemaker and a drummer. Her mother sang, danced, and played the mandola. From a very young age, she learned to sing and dance — earning a nickname, Totó, that has stuck throughout her life.

“Totó means big heart but small in stature,” Totó said, laughing. “People have always called me that, and that has never changed. And it never will change.”

She was six years old when she first performed on stage. “My mother would put on plays,” Totó said. “At the end of the school year she put on a performance and taught me a song and I sang it.”

It was just the beginning. But a confluence of cultures, rhythms, and traditions were already shaping her musical identity.

The marshy tropics of Colombia’s Caribbean coast were a melting pot for musical innovation, with different styles and traditions seemingly sprouting up in each town.

As a teenager, Totó would journey from village to village, soaking up each town’s rhythms and dances. She saw the men of the villages, mainly the fishermen, cigar-makers or the men who turned tree trunks into canoes, pounding on drums.

But it was the “cantadoras,” the women who sang about everyday life, who commanded Totó’s attention. She studied these women as they sang about mashing corn, washing clothes in the river and growing cassava and plantain behind their shacks. This was the music Totó would soon introduce to the world.

Talaigua Nuevo, for its part, was located on a river island called Mompós, one of the most culturally and musically diverse places in Colombia. Between the 16th and 19th centuries, Mompós was a vital trading outpost that connected the Atlantic coast with the Andes. The Spanish used the inland town to safeguard plundered gold from Caribbean pirates. But the bustling commerce filled the streets with a unique mix of Europeans, indigenous and African slaves — all bringing their own musical traditions with them.

Totó believes that “hundreds” of genres of music were born in or around Mompós, including rhythms like the cumbia, chalupa, mapale, and bullerengue. The music was then transported down the Magdalena River and introduced to the rest of the country, making the river one of Colombia’s most important cultural waterways.

Totó spent little of her childhood in Mompós. Her family relocated briefly to Villavicencio before civil conflict in the mid-20th century forced them to flee to Bogotá. But Mompós, where her ancestors are from, was already etched in Totó’s musical genes, for “Momposina” means “from Mompós.”

“The love for music is passed on through your genes,” Totó said. “I never lost my sense of belonging.”

In Bogotá, Totó’s mother transformed their home into a sanctuary for the musical traditions of their homeland. She started a dance group and many of the Caribbean coast’s musical luminaries including Lucho Bermudez would spend time at the house.

Totó quickly became a “promising singer” in her mother’s dance group, and in the 1960s, Totó formed a band that would gain some local popularity. She performed at family parties, street parties or wherever she could. Her family then began promoting her music on television to expand her audience.

“My music is a singing dance that belongs to a tradition,” Totó said. “The tradition has been flowing and evolving from generation to generation, and I gave it my own flavor.”

She toured outside of the Colombia for the first time in the 1970s, but in 1982, Totó left Colombia to study music at the Sorbonne in Paris — an adoptive home of sorts. France, she said, “has a great culture for art.” And the French were very receptive to Totó’s music.

She recorded her first album in Paris and became an ambassador for the music of her homeland, touring across Europe and the Soviet Union. “In France, I sang in the streets, in restaurants, on street corners, in supermarkets, in the metro, everywhere,” Totó said.

But her big break arrived when Grammy Award-winning musician Peter Gabriel heard her singing at a concert in France. Gabriel brought her to his home studio, Real World Studios, and began recording what would be her breakthrough 1993 album, “La Candela Viva,” which featured one of her best-known songs, “El Pescador.”

Totó went back on the road after finishing the album, gaining a following in France, other parts of Europe, and Colombia.

She has since recorded five albums, including a 2015 effort called “Tambolero” in which, with her granddaughters, she “recreated and reimagined” many of the songs recorded during the “La Candela Viva” sessions.

She has been called “The Queen of Cumbia” and “The Voice of Colombia,” but for her it is about keeping the musical traditions alive and introducing them to younger generations. “The stage is a temple,” Totó said. “You must respect it. I give my heart to the audience. It is a commitment.”

Although Colombia’s traditional music is often overshadowed by commercial artists, the recognition she is receiving and the crowds at her shows have been growing.

Totó recently performed at the World Summit of Local and Regional Leaders in Bogotá and in Llanos de Yarí, Meta, in celebration of the signing of the peace accord between the Colombian government and Revolutionary Armed Forces of Colombia (FARC). In 2013, she was awarded the Latin Grammy Lifetime Achievement Award. “Colombians are recognizing their cultural and musical identity,” Totó said.

After more than 60 years of performing, Totó’s music is an enduring link between Colombia’s past and present. The story of her music, in many ways, is the story of Colombia’s musical heritage. And at 76 years old, Totó shows no signs of stopping.

“I continue to sing because I love it,” she said. “It is my mission here on Earth.”