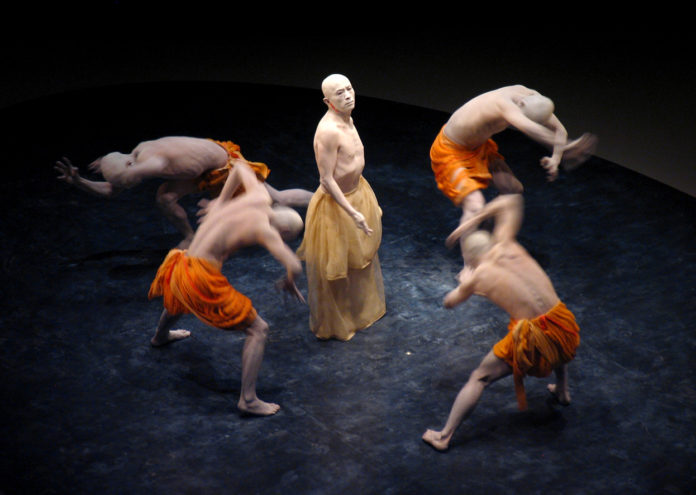 The art of Japanese dance comes to the Colón Theatre for two nights in a performance titled ‘Tobari’ by the Sankai Juku company.

Founded in 1975 by Ushio Amagatsu, Sankai Juku, which means “workshop of the mountain and the sea,” is one of the most representive dance companies of the stylized art-dance genre, popular in small avant-garde theaters across Japan. Amagatsu studied at the Classic and Modern Dance School in Tokyo and belongs to a second generation of butoh dancers. In 1978, the director presented Kinkan Shonen, his first major show and was invited to perform at the Nancy Festival de France. Since then he has toured Europe, South America, the United States, Australia and Asia.

Audiences on Nov 9 and 10 will be treated to an amazing experience where time and space are approached poetically through the movements of dancers and music. Eight dancers with shaved heads and minimalist costumes are part of this montage, inspired by the circle of life-passing through birth, death and rebirth- and in the manifestations of the sacred.

The precision and delicacy of Tobari contrasts with the latest technology. In the center of the stage, the public will be able to appreciate a black circle, slightly shining, in which it appears a solar radiance and a curtain that produces the sensation of immensity. The use of diffused lighting is also one the protagonists of the performance and the music melds with stylized movements. According to Amagatsu, “Tobari is a seven-scene show that is represented poetically through the dancers’ choreographies and their relationship with music. The changes between slow and fast movements symbolizes the tension between time and human beings.”

Butoh dance is characterized by being an artistic manifestation in search for a balance with the sacred. It is also a pacifist statement in response to the horrors of World War II and the terror and mass destruction the Japanese faced with the dropping atomic bombs over Hiroshima and Nagasaki.

The performance comes to the Colón with the support of the Cultural Affairs Agency of the Government of Japan (ACA), the Asia-Ibero-America Cultural Foundation and the III International Dance Biennal of Cali in partnership with the Japanese Embassy in Colombia.

Ticket are priced $30,000 pesos and $ 95,000 pesos and are available at the Teatro Colón’s box office or through online agents: tuboleta.com. Doors open at 7:00pm and the performances start at 7:30pm.