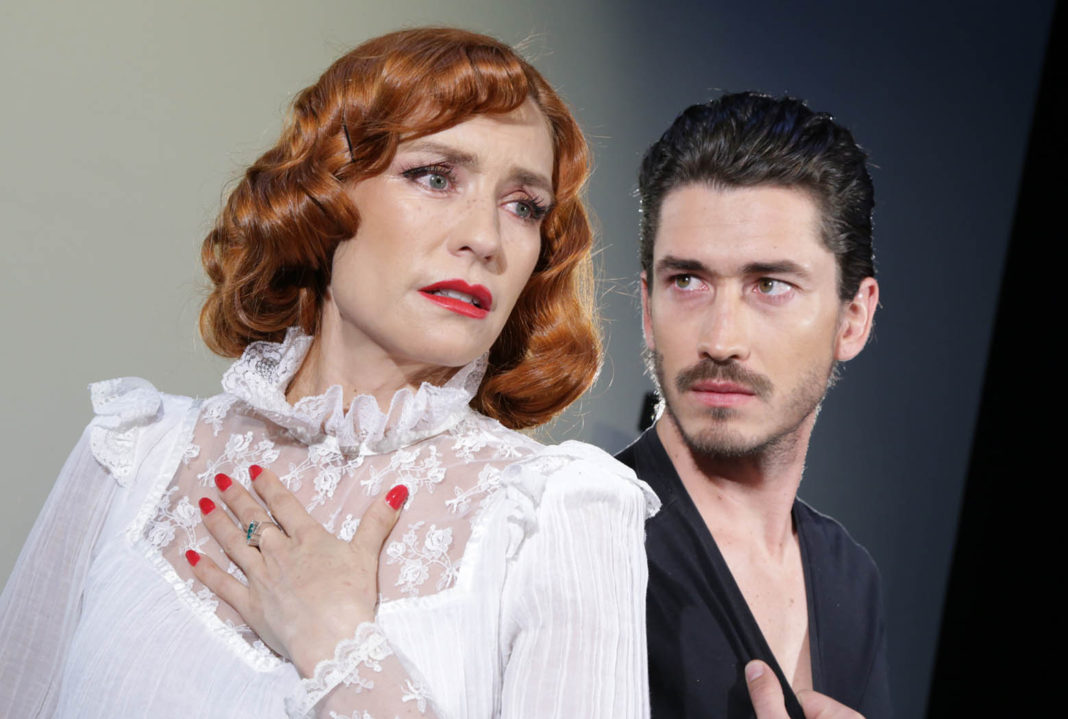 Never did I think I would see a production of A Streetcar Named Desire where the furniture drifted down from the ceiling and Stella wore a form-fitting dress and sneakers. But, I suppose, I also didn’t think I would ever see the play in Spanish. The production at Teatro Colón, directed by Diego León Hoyos, captured the essence of the play and held my attention – no mean feat, considering how difficult it is to translate a play that’s so firmly of the American South.

If you’re not familiar with the play, here’s a bit of what goes on: Blanche DuBois, teacher, widow, and living time capsule of the old South, has come to New Orleans to stay with her sister, Stella, after the repossession of their family home. Stella is married to Stanley, a possessive and at times violent he-man. Blanche distrusts Stanley, but she quite likes one of his friends, the dutiful and gallant Mitch, and hopes to marry him. But Blanche’s tragic past may prevent her from finding happiness.

As a theatre lover with a relative familiarity with Tennessee Williams, I was impressed by the daring of Teatro Colón in producing one of his plays in Spanish, and somewhat nervous about the prospect of watching it. Would I like it? Would people who didn’t know much about the American South like it? I, at last, understood my Colombian friends’ skepticism when they hear I first read Gabriel García Márquez in translation: could someone from another country do right by a work that owes everything to its setting?

However, my fears were unfounded. I admired the smoothness of Beatriz Caballero’s Spanish translation (at least, it was smooth to my non-native ears). It was much more neutral and less idiomatic than the English version, and no one tried to attempt a Colombian equivalent of a Southern accent, which was probably a wise choice. Most of the text seemed to translate well; I chuckled at the Spanish rendition of Blanche’s joke about immortality, just as everyone else in the audience did. The only disappointment was Blanche’s final line in the scene of her date with Mitch: “A veces se hacen milagros” doesn’t sound quite so good as “Sometimes there’s God so quickly.”

The acting was admirable as well. Marcela Mar’s Blanche was especially good, saucy and flirtatious but stopping short of annoying. Juan Pablo Urrego’s Stanley is as loutish and hateable as any Stanley ought to be, complete with the necessary scowl and muscles. Although the actors’ costumes confused me at the outset – why is Stella wearing sneakers with a dress in the 1940s? – I eventually appreciated the contrast between Blanche’s demure, wide-skirted dresses and the other characters’ more modern clothes. Blanche seems even more pathetically trapped in time when she’s standing next to Stella, who’s wearing cutoff shorts and a button-down that ties in the front.

As for the floating furniture? Many set pieces, including chairs, descended onto the stage at the beginning of the show, rising again with astonishing speed and little sound when they were no longer needed. It was unusual, to be sure, but not a bad thing. Any excuse to look up at the breathtaking ceiling of Teatro Colón should be taken. The theater is just as beautiful as the works on its stage. But don’t take my word for it. Go see this one – before October 26, its last showing – and find out for yourself.