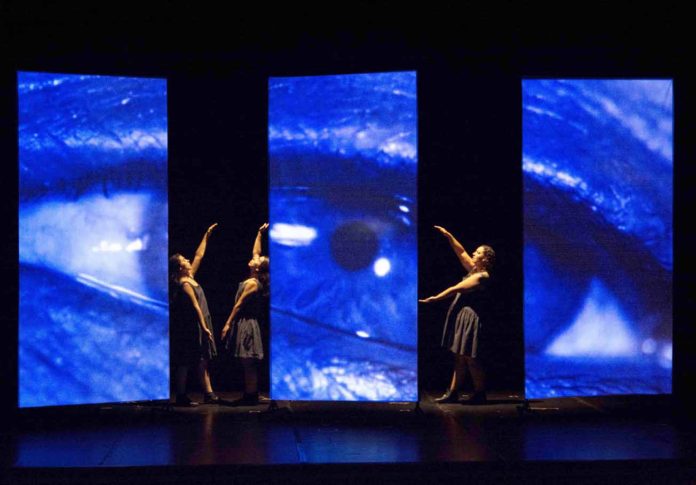 The Teatro Colón is the iconic venue for a two night performance of Teatro Azul’s “Hominum, perdón por ser: la reconciliación en escena.” Directed by Leonardo Echeverri, co-founder of the Armenia, Quindío, theatre company, “Hominum, Sorry for being: Reconciliation on stage” explores through poetry and physical movements the process of reconciliation of three women who endured the horrors of war. With video mapping and testimonies by Eva Kor, survivor of the Nazi Holocaust; Immaculée Ilibagiza, survivor of the Rwandan genocide; and Pastora Mira, victim of the Colombian armed conflict, “Hominum, perdón por ser,” is a visceral, thought-provoking performance that shows how three strong women could rebuild their lives to reach forgiveness.

Rather than unraveling voices from the past, Teatro Azul’s creative use of light and video  renders a contemporary perspective on the process of reconciliation. Poignant images are projected on stage in perfect harmony with the bodies of the actresses, serving as a shield in their fight for the hope and a reflex to the emotional charge that forgiveness and reconciliation must entail. According to Echeverri, the play must unleash “a necessary reflection for the post-conflict Colombia is experiencing.”

Tickets for Hominum can be purchased at the Teatro Colón’s box office or through tuboleta.com. Tickets are priced $ 30,000 pesos. Performances February 21 and 22 at 7:30 pm. Doors open 7:00 pm.