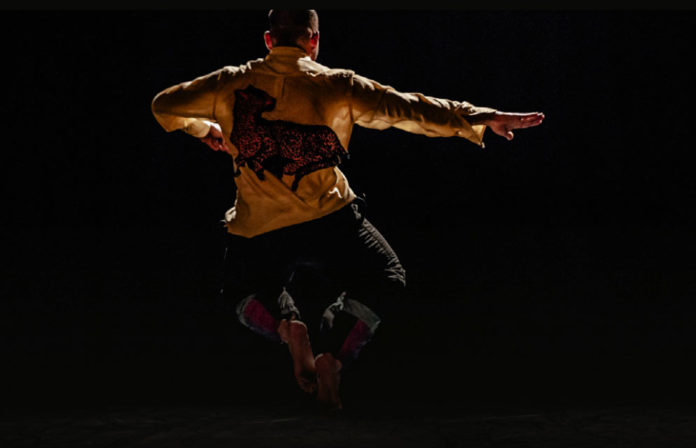 That was the motion dancer Edward Tamayo cycled through as visitors filed in to see the modern dance show When I’m Not Around, one event in Bogotá’s Danza en la Ciudad lineup. Always this order, never a change. And never acknowledging the man who sat in the corner, back turned, completely still in darkness.

Sala E of the Cinemateca Distrital filled up quickly. The audience swelled in until every seat was taken. Ushers had to direct people to sit on the tiered floor. And still Tamayo went on, bowing, kissing, gesturing.

Eventually, sound played over the loudspeakers. But the sound wasn’t just music. It was popular songs mixed with the sounds of a city: car horns beeping, metal banging, indistinct chatter. The man in the corner, Johann Pérez Viera, eventually stood up to join the dance.

However, this was no ordinary dance, or at least no traditional dance. Both men wore simple clothing – Tamayo in a faded, too-big shirt with animal print, Viera in a button-down with a design similar to leopard skin. They often writhed on the floor and gripped each other in headlocks more than once. It likely wasn’t what anyone was expecting, and that was exactly the point.

When I’m Not Around, according to the Danza en la Ciudad website takes on “the absurd, paranoid, and frenetic side of the Latin American imagination. Accompanied by a highly detailed sound design, the creators present a work inspired by their cities of origin, where working to survive is an everyday norm.”

Viera and Tamayo are two members of La Compañia La Cerda, a Barcelona-based dance company that has been presenting contemporary performances in Spain and Germany since 2013. Though they and their colleague, Valentina Azzati, have performed principally in Europe, none of them are European. Viera is Venezuelan, Tamayo is Colombian, and Azzati is Argentinian.

Both Viera and Tamayo have lived away from their countries of origin for several years, but their experiences there permeate their art. “Together,” they say, “we explore the imaginary world of that which we left behind, that place in which we no longer reside, but in which we rediscover ourselves and in which we want to immerse our audience.”

Danza en la Ciudad, an annual dance festival in Bogotá, began on November 5 and ends November 17. More than 30 different dance groups are participating in the festival, and events taking place in 14 different localities of Bogotá. For the final presentations visit: www.danzaenlaciudad.gov.co