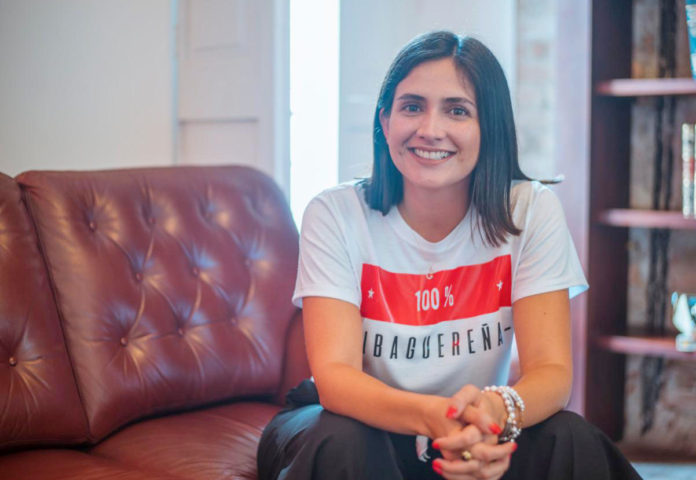 Located 200 km from Colombia’s capital, Bogotá, the small city of Ibagué is a neat, sun-splashed place whose main claim to fame is its traditional Andean music festival. It is also home to one of Colombia’s more refreshing personalities, the district’s Secretary of Culture, Greis Cifuentes. As a full-time politician, women’s rights advocate and feminist, Greis is a step away from the old guard patriarchs who have dominated the region’s political scene. “For many, to be a single mother and continue with a professional and academic life, would be simply inconceivable or incompatible,” she states.

Born and raised in the departmental capital of Tolima, Greis’ professional growth was nurtured through working at a handful of prestigious institutions that span from the Colombian consulate in New York to the Ministry of Culture, as well as studying for her Masters and Ph.D. at some of Europe’s most prestigious universities.

After finishing her studies in Germany with top-tier academic credentials, Greis took the decision to return in order to contribute to the social and economic development of her country. “Abroad, things are almost complete and the contribution one can make is minimal. I have always been driven by the notion that work can be impactful.”

During her first six months of her time in office, an immediate challenge was instilling the belief that culture should be a fundamental part of the city’s forward-looking planning.

“Culture is viewed very differently in Europe as central for development and creativity. Here, we may have the budget, but investment remains low. We don’t prioritize how to invest,  sometimes we don’t need more; the question is how are we going to distribute it in a current and strategic way to the things we need the most?,” she believes.

With all its natural charm and privileged location as the gateway to the Central Andes and coffee-growing region, Ibagué is often overlooked by new arrivals to Colombia, and it wouldn’t be unreasonable to suggest that the city has struggled to attract foreign visitors due to a lack of cultural hubs and events. For many Colombians, Ibagué is often considered an obligatory pit-stop along the Bogotá to Cali highway that offers guests succulent tamales and roasted pork lechona.

“We have earned the title of being the music capital of Colombia for 100 years, yet we don’t actually honour this title,” states Greis over the frustration she, and others, face working in th promotion of culture. “One of the things we are working on is to include Ibagué as a member of UNESCO’s Network of Creative Cities (red de ciudades creativas de UNESCO),” and fourth Colombian city to be listed,” says Greis.

But in order to join Bogotá, Medellín and Valledupar with the UNESCO distinction, Ibagué must come up with a long-term strategy for self-promotion. “I believe this is a very healthy process for the city: to know where we are, what we have, and what isn’t working,” claims the cultural representative. “There’s room for improvement and it doesn’t depend on who is in power.”

Alongside her vast political ambitions, Greis is a dedicated activist for women’s rights and gender equality; a topic that she has further embraced during her time in the Mayoralty. “When you only see men in positions of power, you tend to believe there isn’t space for women – and for this reason – when a woman enters into these spaces, it’s necessary to establish an agenda that addresses gender and help others,” she states. Despite her contagious enthusiasm for the cause, Greis remains realistic about where Colombia is, and how much further it needs to go, to establish permanent progress. “It’s absolutely necessary to have a country where women are making decisions because a democracy without participation is only half a democracy,” she adds.

At the end of 2020, Greis played a pivotal role in hosting the 18th Capital Cities Summit (XVIII Cumbre de Ciudades Capitales), which was attended by President Iván Duque, and mayors of other associated cities including Bogotá’s Claudia Lopez. December’s Summit was also marked with a reception at Ibagué’s recently-renovated Panóptico. The cross-shaped prison, built during the 19th Century, is another historic landmark that Greis believes should attract more visitors to a city known for its musical soul.

Greis also remains highly positive in the face of uncertainties brought about by the coronavirus pandemic, largely to the collaborative atmosphere that has been established between regional and national governments. “We have a great relationship with the national government and they have their eyes on what is happening in Ibagué. This is a unique opportunity.”