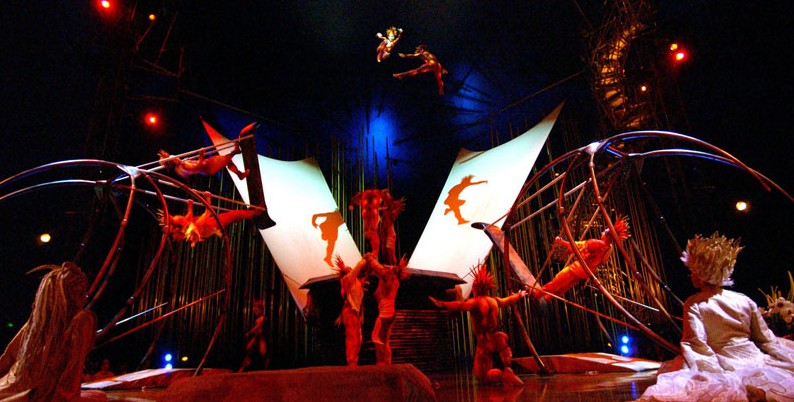 If Hurricane Katrina had never happened, maybe Cirque du Soleil would never have come to Colombia. In 2005, the Montreal-based alternative circus had a three-date commitment. They would do two shows in Mexico City and one in Biloxi, Mississippi. After completing the two shows in Mexico, Hurricane Katrina smashed into the Gulf Coast of the United States, leaving most of coastal Mississippi in shambles. Performing in Biloxi was out of the question, so Cirque du Soleil organizers held a meeting to discuss what would be the follow up plan, and instead of throwing in the towel they arranged to take the show to South America.

When Varekai comes to Bogotá next month, it will mark the 550th show in South America. Its title means “anywhere” in Romanian and the plot is based loosely on the Greek myth of Icarus, whose wax wings melt after flying too close to the sun. Rather than drowning in the sea below him as per the myth, in Varekai, Icarus lands inside a lush forest. He survives the fall but breaks his legs in the process, finding himself in a strange new world full of fantastic and surreal creatures.

Icarus sets out on a journey of self-discovery through the forest – a classic story of rising from the ashes. Assisted by quirky mad scientist La Vigie, he works on regaining his strength and his desire to fly again. While on the ground, Icarus also meets The Betrothed, an insect-like creature with whom he falls in love. Shortly after they meet, she is kidnapped and having already lost his love, Icarus must find a way to see her again and conquer the obstacles in his path, continuing his quest.

Setting up the stage for a performance of Varekai takes eight days, most of which are dedicated to the installation of the Grand Chapiteau (a massive big top that measures 165 feet (50 meters) in diameter and is supported by four 82-foot-high (25 meters) steel masts. The climate-controlled Grand Chapiteau seats more than 2,500 people and is held down by 400 five foot (1.5 meters) long stakes.

The official press conference for Cirque du Soleil held at Parque Nacional billed the show as a chance to “Enter the enchanted forest that has been across the world.” Refreshments were followed by a two act preview circus showcasing amazingly flexible performers throwing each other around the stage in quirky outfits. There was a short question and answer period with the performers afterwards.

From around the world under one tent

The team truly comes from all walks of life. In attendance were a 25-year-old Ukrainian gymnast who moved to the U.S. as a boy to pursue his dreams of becoming a Cirque performer, a 16-year-old British girl named Emily, 42-year-old Khvicha Tetvadze who is known for his typical Georgian dance, Lasha Sakhokia, a 27-year-old from The Theatre of Georgia’s National Ballet and fellow Georgian Tornike Zambakhidze, who was very pleased to be in Colombia.

The three Georgians were the most animated on stage, accomplishing many twirls in the air and landing on their knees after jumps. This is no small feat, considering how many shows these performers do each year. While not spinning on their knees, they confidently wielded swords and would strike each others’ shields while twirling in place.

The saying holds true that for every storm there is a silver lining, and Bogotanos shouldn’t miss this incredible show carried to the city, like its protagonist, on the winds of fate.