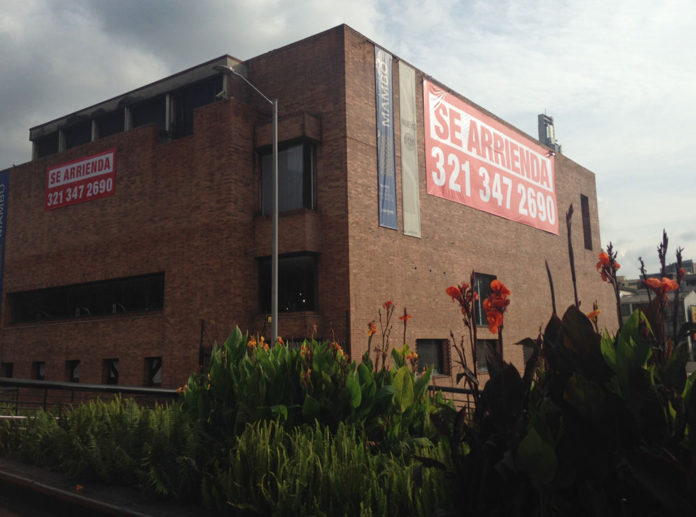 Word is still out on what transpired Monday with the main façade of one of Bogotá’s most prestigious cultural institutions, the Museum of Modern Art (Mambo).

What was unleashed wasn’t a poster announcing an upcoming exhibition, but a mystery that has the local art community on edge.

A giant banner blazoned with the words “Se Arrienda” caught the city off-guard when the emblematic brick building designed by Colombia’s most famous architect, Rogelio Salmona, appeared ready “For Rent.” Many a passerby on the Carrera Séptima called a local radio station asking if the sign was a publicity stunt or if the landmark museum really did need to find a new home.

On the eve of Mambo celebrating its 50th anniversary and drawing to a close a host of important exhibitions in December, the sign with the telephone number of an estate agent was accompanied by poster at the main entrance, reiterating “Mambo Will Be Rented.”

By Monday afternoon, Mambo’s “appointed realtor” confirmed to The City Paper that the 32 year-old building is looking for new tenants, due to “maintenance problems and lack of funds.”

When asked if Mambo was using the giant banner as part of an upcoming campaign to raise money, the very débonniare Muñoz flatly denied the claim, stating that since the sign was hoisted in the morning, the prestigious institution had already received five proposals from interested persons, and his phone “hadn’t stopped ringing.”

During an orchestrated visit to the museum Monday, the main hall and walls were void of any sign of an upcoming show. Lighting fixtures dangled over rolled floor carpets and the texts from the ‘Ríos y Silencios’ exhibition by artist Juan Manuel Echavarría scraped away to make the museum as stark as possible.

According to Muñoz, some 7,000 works of art are being stored in a depository, but due to security issues, were off limits to the media. The agent also remarked that the institution that houses Colombia’s largest modern art collection requires repairs to two kitchens, its basement auditorium and waterproofing.

Facing the Bicentenario Park and within walking distance of TransMilenio stations Museo Nacional and San Diego, the iconic Mambo covers 4,420 square meters and according to the well-rehearsed realtor, the monthly rental has been set at $120 million pesos (US$44,000) and “negotiable.”

As a private entity, Mambo relies on funding from the district, donations, sponsorships and a general admission price of $10,000 pesos per visitor to keep operating. In an interview with The City Paper shortly after being appointed the museum’s director in 2017, Claudia Hakim, did admit that the museum’s financial situation has always been precarious, but that a host of upcoming shows, outdoor concerts and an important make-over to the main exhibition rooms would attract more audiences.

The project to give Bogotá a space for modern art began during the 1960s under critic and historian Marta Traba. It wasn’t until 1969, however, when Gloria Zea, former wife of Colombian painter Fernando Botero, was named the museum’s first director that a  permanent home for a growing collection became an ambitious undertaking. After more than a decade of lobbying, then President Belisario Betancur, gave Mambo a Rogelio Salmona building near the Carrera Séptima with Calle 24.

When Hakim left her gallery NC-Arte to assume Mambo, it seemed this important space was getting a new lease on a creative future. Then, the bizarre sign.

Clues have begun to surface regarding the “For Rent” sign. A group of incredulous art insiders insist the realtor is an impostor going by the same name of a famous Colombian actor and simply, too coincidental.

On Monday another clue: An art collective released a statement on Facebook announcing they were ready to “take” Mambo from February 9 to 11 with an exhibition titled “La Toma del Mambo.”

“We take what is common, what corresponds to us. We take art to oxygenate art,” reads the statement. “We take the freedom to be free, not to sell our art, but to share it.”

Even though the sign remains a mystery, the future of Mambo is more than secure. The museum even released the main exhibitions scheduled for a year in which they celebrate 50 years, and one collective, poised to turn “fake news” into an artistic expression. 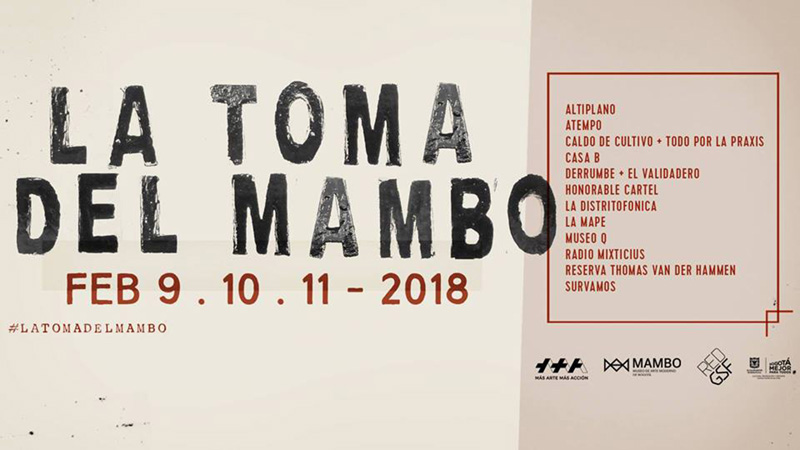