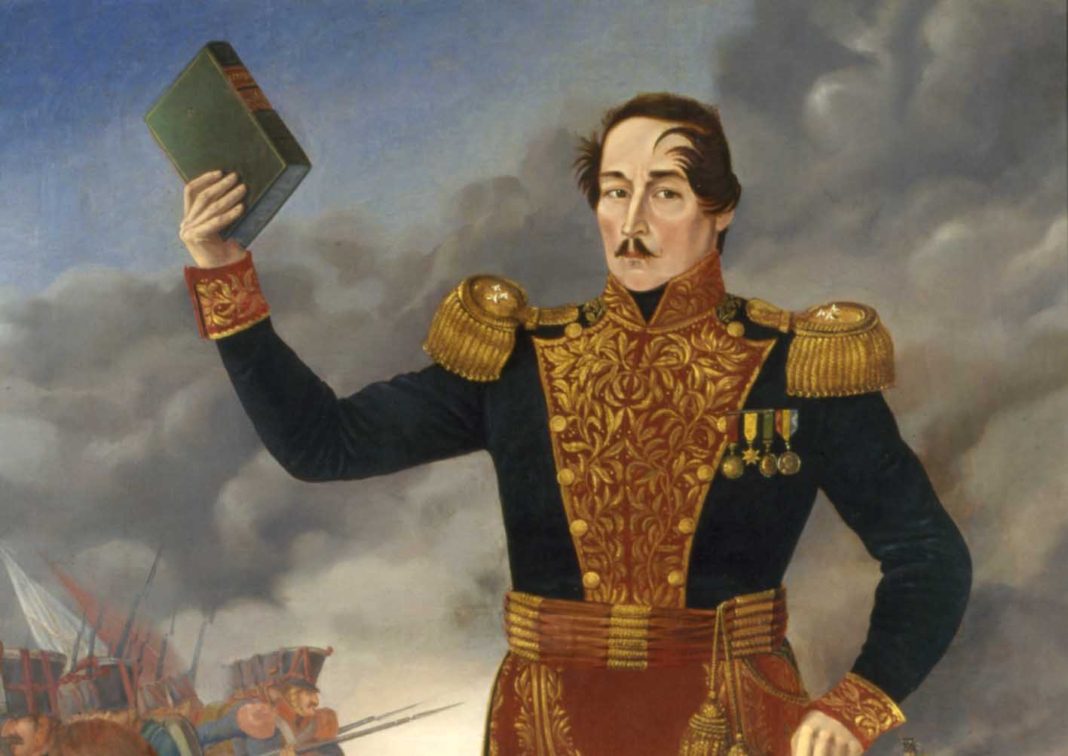 The National Museum of Colombia – Museo Nacional – is presenting its last major exhibition within the framework of the country’s bicentenary with “Painters in the time of Independence: Figueroa, Gil de Castro, Espinosa.” This exhibition evokes the pioneering character of the Colombian independence movement through representations of the protagonists and subsequent consolidation of new South American Republics given successive victories by Creole armies against the Spanish Royalists.

Among the Liberation painters is Peru’s José Gil de Castro (1785-1837), a mulatto artist born during the Viceroyalty and son of freed slaves. Gil de Castro is considered the precursor of the Chilean school of painting, and independence loyalist who followed the campaign of José de San Martín from Santiago to Lima. Two Santafereños – Pedro José Figueroa (1770-1836 ) and José María Espinosa (1796 -1883) – join Gil de Castro in this landmark exhibition with works that document the transition in leadership and power from colonial rule to Republican freedom. The exhibition marks a first in Latin America for bringing together works by three iconic artists and contributing to the research on Latin American Art during the late 18th and early 19th Centuries.

The exhibition consists of 112 works belonging to different museums and private collections in Peru, Chile, Argentina, and Colombia. Among the oil on canvas paintings, audiences will see for the first time in one exhibition space rare portraits of Simón Bolívar and José Olaya by Gil de Castro belonging to the collections of the Museum of Anthropology, Archaeology and History of Peru.

The exhibition is organized in four sections, opening with Glorious Bodies, in which faces and bodies of the Independence heroes are represented in images that have been revered and reproduced over time. This section also presents an analysis of the materials used in elaborating these works, offering up clues as to their documentary and illustrative objectives.

The second section – Heroic Landscapes – presents the geography and specific territories of the Independence and that have evolved as places of historical memory. As its title suggests, the third section, Exemplary Death, looks at the rituals and religious methods of Spain during the Independence campaign, among them torture and the execution of civilians who supported the revolutionary cause. In Colombia, the struggle for collective emancipation is embodied in Policarpa Salvarrieta, one of many women who gave their lives for the new Republic.

In Peru, martyrship is represented in José Olaya (1789-1823), the son of a fisherman who acted as a secret emissary carrying messages to patriots by swimming. Olaya was arrested by the Spanish and sentenced to death, never revealing the contents of the messages that he swallowed. In the final section – From Subjects to Citizens  – the National Museum looks at the social context in the lives of these three painters, from the family nucleus to their everyday customs.

The exhibition is curated between Laura Malosetti Costa of Argentina and Carolina Vanegas Carrasco (Colombia). And if you thought that the bicentenary was drawing to close have a final brush with history with an exhibition that lasts until March 1, 2020.

B Capital captivates Bogotá for three nights of runway fashion and...