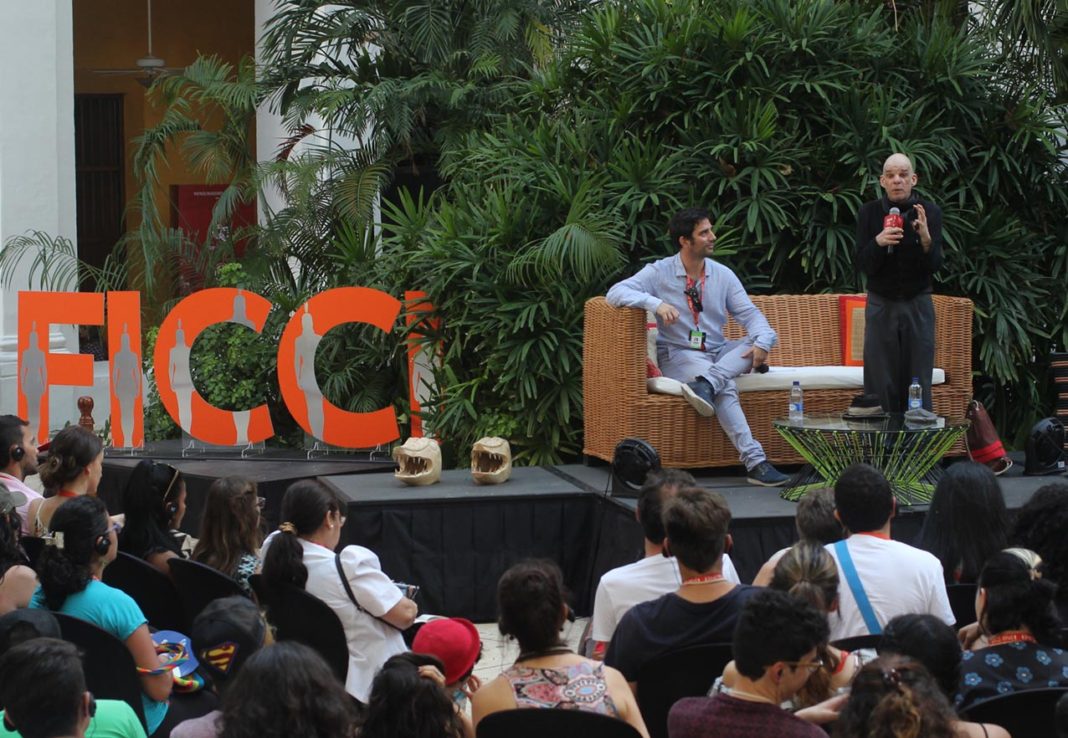 Red carpets were unfurled at the Teatro Adolfo Mejía and eager spectators lined the length of the theater and filled other venues hosting the 57th edition of the Festival de Cine de Cartagena de Indias (FICCI). Attendees ranged from Colombian film students leaving their hometowns for the first time to illustrious figures in the film industry and travelers surprised by the unexpected cultural addition to their vacation itinerary. Guests with festival accreditation were given priority for this six-day event, but all were welcome to view an array of Ibero-American and international films. re.

True to FICCI’s mission, the competition categories were full of strong entries produced or co-produced in Spanish and Portuguese-speaking countries. Many of these films, and several others that comprised the selection of 167 dramatic and documentary films in the festival, entered into a natural dialogue because of how they presented complementary perspectives on several common themes: stories of displacement, journey narratives, and meditations on identity in relation to place; and deeply personal explorations of the distinct roles parents and other loved ones can play in our lives.

Besides Colombia, the single country with the greatest presence at this year’s edition of the festival was France. French cinema has long-enjoyed an unrivaled reputation of prestige, and, with the France Colombia Year 2017 initiative promoting cultural exchange between the two countries, FICCI harnessed the opportunity to spotlight contemporary French film alongside older classics. For the historical perspective, there was a program of French film noir and a retrospective of Eric Rohmer comprised of his “Six Moral Tales,” intricate portraits of relationships situated in visually striking landscapes. Contemporary French film was represented by two tributes honoring the distinguished French actors Denis Lavant and Vincent Cassel.

The tribute screening programs and master-classes held by the actors drew throngs of fans. At Lavant’s masterclass Saturday, simultaneous translation headsets were distributed, and the audience chatter, a mix of conversations in French, English, and Spanish, began to subside. Then Lavant, clad in a mismatched three-piece suit joyously entered the plaza for an hour of charming the crowd, his playfulness on full display. Several days later, Lavant was spotted at the Inquisition Museum, curious to learn about the history of Cartagena. His visit to the museum demonstrates his efforts to engage a sense of place in his experience at FICCI and also reflects the democratic spirit of the festival that leads to casual encounters between filmgoers and giants of the industry.

The tribute ceremony for Cassel, perhaps the most anticipated event of the festival, featured the actor in his breakout role in the 1995 sensation La Haine. Also of note in his tribute was his most recent project Juste la fin du monde (It’s Only the End of the World), which stirred controversy at Cannes in 2016. It is acclaimed director Xavier Dolan’s sixth film, and was awarded the Grand Prix at Cannes yet was met with an overwhelmingly negative critical response. The film depicts an afternoon of family collapse when an estranged playwright visits home to share a terminal prognosis with his family, but is thwarted in his mission when tension erupts. A heavy use of close-up shots generates anxiety in the claustrophobic viewer to convey the agony experienced by the characters. Cassel’s character, the volatile older brother, typifies the bad-boys and villains he often plays.

Another film that was embroiled in controversy at Cannes and politicized in its country of Brazil, Aquarius, the winner of the Gems category of FICCI, demonstrates the strength of a spirited, free-thinking widow. By the time the main story begins, a construction company has bought out her neighbors in the Recife beachfront condominium where she has lived for many decades. The developers present grandiose plans for a high-rise they intend to build on the lot, but the protagonist resists even their most aggressive attempts to drive her out. In her professional role as a music critic, she claims to embrace new technologies, but her record-lined walls belie her nostalgia. She is not stuck in her old ways, but she refuses to accept all notions of modernization and becomes especially feisty in the face of changing societal values that cater to the tastes of the wealthy.

In the dramatic competition, several films considered a similar linkage of identity to changing architectural spaces in an era of gentrification and waves of new developments appealing to the upper-classes. Venezuelan film La Soledad is based on the true-story of director Jorge Thielen Armand’s family’s mansion, its current dilapidated state and impending demolition, and the desperation of its current occupants, his family’s former maid and her family, struggling to survive amidst the country’s economic crisis. With the real-life individuals that inspired the film playing themselves, the project straddles documentary and drama classifications.

As La Soledad depicts a deteriorating cityscape of Caracas, the documentary competition entry El Sitio de los Sitios visualizes a transformation of an opposite nature brought about by the growth of the tourism sector in the Dominican Republic. The film juxtaposes the daily experiences of tourists on holiday in fancy gated-communities and the locals working just beyond the walls of the residential complexes to create an artificial beach. As Oriol Estrada, one of the film’s directors explained after a screening, “the foreign tourists are the most distant from the camera, appearing in the background,” anonymous and out of place, in stark contrast to the workers, portrayed with intimacy, chatting about girls and children they have fathered, often fitting into the Caribbean male  stereotype.

A nearly identical gated community to those in El Sitio de los Sitios, this one in a suburb of Buenos Aires, is the setting of the revenge fantasy plot in dramatic competition entry Los Decentes. A live-in maid yearns for liberation and takes the side of a nudist colony residing bordering an affluent neighborhood when a clash ensues. While the nudists may not initially seem the more respectable party in the confrontation, the film ultimately exposes the lack of human decency among the self-righteous, superficial upper classes. The satirical approach resonates strongly in thematic and visual content with the absurd contrasts that form the core of El Sitio de los Sitios.

Stark but grimmer contrasts of groups in physical proximity are the focus of celebrated documentary Fuocoammare (Fire at Sea) in the Gems category. The film sets the travails of desperate migrants on the perilous journey to Europe by boat against the lives of Italian fishermen and aid workers who inhabit a pastoral island surrounded by seas where vessels overcrowded with migrants are rescued or tragically sink. Among the residents of the island, the documentary most closely follows a charismatic young boy, his pastimes of making slingshots, and his hypochondriac, anxious tendencies, all of which demonstrate his comfortable upbringing at complete odds with the anguished migrants.

Like the Africans fleeing their home countries and chasing the promise of a better life in Fuocoammare, the protagonists of three films in the dramatic competition, El Cristo Ciego (The Blind Christ), Mimosas, and Arabia, are on clear missions that put their belief systems to the test. The narratives of El Cristo Ciego and Mimosas surround pilgrimage journeys, presenting wide-ranging conceptions of religious practices and how to maintain faith in trying times. Winner of the FIPRESCI best film award at the festival, El Cristo Ciego follows a young man through dusty expanses of the Atacama Desert in Chile as he performs miracles while telling and hearing stories of losing and regaining faith in God. Like the downtrodden hoping for a miracle from the Christ-like figure, the protagonist of Arabia is motivated to make his moves by idealism that he can break the cycle of poverty, relocating to towns where he hopes to find stable work and clarity in his life. His death is a framing device through which the story within a story is told, his tragic end conveying the hopelessness of blue-collar workers toiling away towards distant dreams.

A decidedly spiritual quest seems to drive the itinerant Val, the matriarch subject of Colombian documentary Amazona. Val’s daughter, Clare Weiskopf, the director of the film, presents her mother with an ambivalent mix of affection and unflinching, pointed interrogation as she tries to dissect Val’s life philosophies. During her own pregnancy and as she prepares for motherhood, Clare has a need to understand her mother’s decision to pursue a nomadic lifestyle with little concern for her the wishes of her young children. Val unarguably loves her children and experiences pain to learn of their suffering or resentment the children harbor from their upbringing. While questions arise about Val’s maternal instincts in some scenes, the overall portrait of the pair is warm, and it seems that the project gave Clare the answers she sought and restored the mother-daughter relationship both craved.

FICCI felt like a family affair this year, with the families of several directors joining the stage to answer questions following the screenings. In addition to Amazona, two other Colombian documentaries, Nueve Disparos and Yo, Lucas are similarly autobiographical projects that emphasize family dynamics and incorporate home videos and footage accumulated over many years. The mothers of directors of both Nueve Disparos and Yo, Lucas built their careers in the same lines of work of photography and filmmaking as their sons, some of their own footage included in the final versions of the films. Nueve Disparos in the New Talents festival segment drew a presence of the Colombian Navy at FICCI as screening halls were filled with navy captains and admirals in their white dress-uniforms.

The audience was less formal at the screenings of Yo, Lucas, a crude self-portrait of Lucas Maldonado’s impulsive and reckless personality, interspersing vulgar dry-erase stop motion sequences with candid interviews in bed with former lovers. Both directors use a fragmented recounting of their life stories to deconstruct their troubled father figures and respond differently, Giraldo resolving to be a better father for his children and Maldonado struggling with substance abuse after the death of his alcoholic father.

The festival ended Monday, March 6, with a gala reception at the Convention Centre, deafening standing ovation included. Now, all eyes are on next year’s event, and no doubt, another look at the best of Latin American storytelling.

Bogotá is the Romantic Russia: A festival for everyone at the...