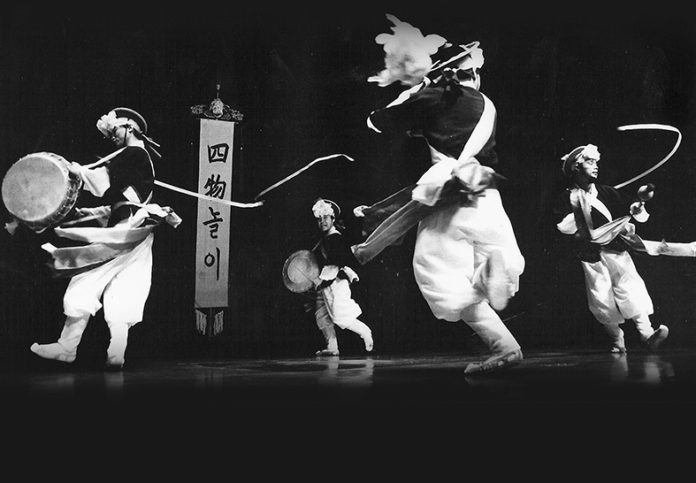 SamulNori is a group of four musicians dedicated to preserving and bringing to the stage Korean music and dance. Since the group first emerged in 1978, these skilled percussionists have set off a revival of the Korean music scene, gaining recognition inside and outside their country.

On Friday, August 31 (8:00 pm), audiences in Bogotá will get their only to chance to see these drum warriors perform on a Colombian stage.

In Korean, the words “sa” and “mul” mean “four things”, and “nori” means “to touch”. SamulNori refers, therefore, to four musicians who play and dance to the sound of four different percussion instruments. Founded by Kim Duk Soo, artistic director and master of the janggu, (traditional Korean drum in the shape of an hourglass), SamulNori has become the most recognized Korean company of traditional scenic artists.

The ensemble may vary in format, but usually, it is presented as a quartet with Kim in the lead. The origins of the music lie in what is commonly known as “peasant” music (“nong-ak”) for celebrating the harvest or family ceremony. The repertoire of SamulNori also integrates folk and religious chants, and thanks to its rhythms, preserves a very unique style.

The success of the group led to the creation in 1993 of the SamulNori Hanullim Performing Arts Group, with the aim of contributing to the preservation and promotion of Korea’s diverse artistic heritage, including the samulnori genre, through performances, research, and training.

SamulNori has not only given vigor and importance to the Korean folk tradition but has expanded its musical boundaries, demonstrating virtuosity in its traditional interpretation and making approximations to the contemporary. The company has performed in more than 3,000 venues around the world.

Director Kim Duk Soo is also recognized as one of the 50-most influential figures in Korea during the last five decades. For Kim Duk Soo, playing the drums is an intense spiritual experience that serves as a constant source of inspiration for keeping an ancient art resounding with the next generation of Korean musicians.

Tickets: $100,000 available at the theatre’s box office and www.primerafila.com.co