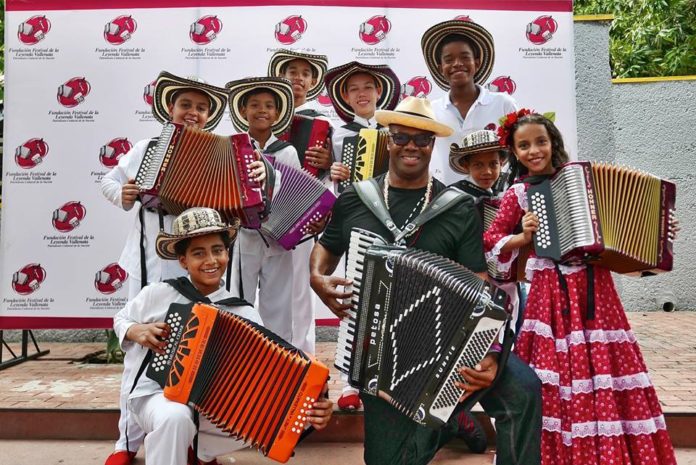 Carlos Vives is arguably the most popular singer, songwriter in Colombia today. Now, add to that list ‘musicologist,’ maybe even ‘musical anthropologist.’ But, most definitely – storyteller.

While many in the U.S. are just now discovering him, Carlos Vives has already won numerous Grammys and Latin Grammys, and has been nominated by the World Music Awards for World’s Best Album (Corazón Profundo), World’s Best Male Artist and World’s Best Live Act.

Now, he’s bringing his pop folklorico fusion to the United States, as the acordeón of vallenato meets the wash-board-and-spoons of Cajun zydeco.

Vives was the honored performer at last month’s Legends of Vallenato Festival in Valledupar, the birthplace of Colombia’s story-telling folklorico music, the acordeón and drum and simple rhythm music of the people. The prolific vallenatero calls it El rock de mi pueblo – the “rock of my people.”

During the final concert of the festival, Vives and friends performed a mini musical, or rock operetta, telling the story of Carlos Vives and his musical foray into the many streams of music and cultures that have merged into his special brand of fusion vallenato.

Vallenato is the contemporary folk music of Colombia, but not the only one. It joins the cumbia, bullerengue and champeta in expressing Afro-Caribbean rhythms, even including gaita flutes of the indigenous of la Sierra Nevada de Santa Marta and lowlands of the Sinú River watershed.

Folk music has always been the repository of a culture’s history. And the 56-year-old Vives has made it his life’s adventure to explore that history, and include it in his personal story-telling. Vives, himself, plays the gaita, and also, the folk harmonica. He is also exploring the story of the African culture’s infusion into the Caribbean and eventually the Americas, including the American south, with its Cajun and zydeco music.

This resulted in Vives performing with zydeco musicians in New Orleans, and inviting Bruce “Sunpie” Barnes and the Sunspots, to perform with him on the stage in Valledupar. The result is a musical story that spans more than five hundred years and three continents. The music that resulted was truly espectacular!

When “Sunpie” Barnes arrived in New Orleans almost 20 years ago, he felt an uncanny recognition when he heard people speaking Creole French.”I picked it up right away,” says Barnes. “When I was a kid, I used to have all these dreams in Creole. I didn’t know what it was, I just knew it was some kind of different language. When I moved to Louisiana, I knew.”

Like Vives, Sun Pie explores and experiments with the African rhythms that have made their way – often by slave ship – to the Americas. He mixes in Delta blues, gospel, boogie woogie, R&B, and West African and Caribbean influences. He calls it “Afro-Louisiana.”

Barnes is passionate about preserving the musical traditions of his own history, while, at the same time, mixing genres with others to create new ‘traditions.’ “The thing I try to do is,I love to try to take the traditional sound and move it in different ways,” says Barnes. “I want to keep it alive and pass it on, but my main thing is to bring something to the table that will have some staying power and that will last. That’s what all my elders taught me. My daddy and my Uncle Sunpie, my mama, grandma, grandpa. To create something that is simply yours.”

In Valledupar, last month, Carlos Vives also recounted his story – one that took him from the coast of Santa Marta to the indigenous music of la Sierra Nevada and to the Caribbean rhythms of cumbia and the vallenato of the campesinos of the Magdalena and Guatapurí river valleys.

On the one hand, by rescuing and modernizing the musical folklore of his homeland, he follows in the footsteps of such Latin American new-song icons as Cuba’s Silvio Rodríguez and Chile’s Inti-Illimani. In Vives’ case, it’s the vallenato, a rollicking accordion-heavy expression from the northern coast of Colombia akin to Louisiana’s zydeco.

The Vallenato Festival also recognized accordionist Emiliano Zuleta and his brother, singer Poncho Zuleta, for their efforts to preserve the vallenato music. “We must follow the rules and parameters of traditional vallenato, to conserve its essence,” says Zuleta. Vives agrees. It’s important to continue recording vallenato and to encourage younger musicians.

“It’s also important that minstrels continue to thrive, like Emiliano Zuleta, the elder,” believes Vives. “Composers that were born free of the recording industry, who were not born to make records, but to carry messages from town to town. To carry the stories.”

The Vallenato Festival was a chance to showcase the traditional music of Colombia, of course. But more importantly – for Vives, Zuleta and Sunpie Barnes – an opportunity to both preserve the old traditions and create ‘new’ ones.

The result is an unfinished story, a fusing of blues-rock sentiment with electric guitars and tribal fever, accordeons with washboards-and-spoons and indigenous flutes. This fusion of story-telling will now resound across the continents and unite that much closer, the musical bonds and new partnerships that exist between the American South and the Valley of Par.

Body and dance in the era of coronavirus: A view from...