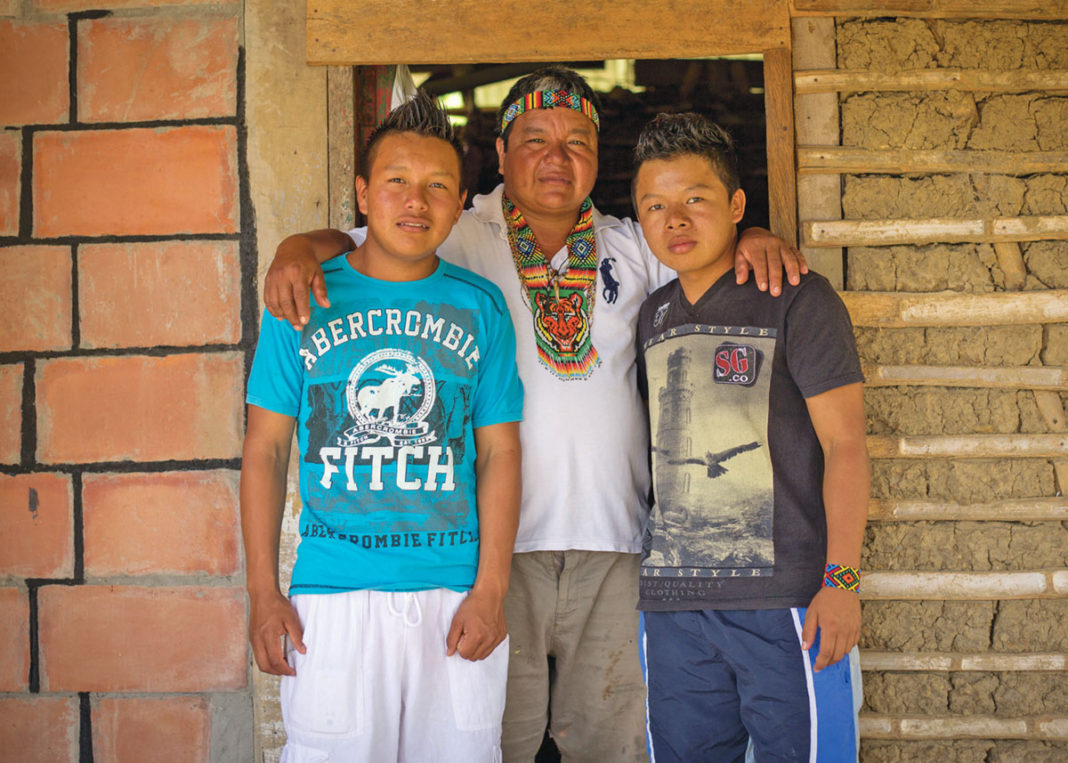 The journey to the tiny village of Valparaíso, Antioquia, began with a YouTube video. It was the juxtaposition that immediately caught my attention – an urban hip hop beat overlaying footage of two young indigenous men walking in a forest; the familiar flow and gesticulations of rap music mixing with a language I was unable to identify. Instead of gold, pavement and flashy cars, there were feathered headbands, waterfalls and a shaman.

This is the story of the Colombian hip-hop duo Linaje Originarios, composed of Brayan and Dairon Tascón. Even in a country like Colombia that is famous for its vibrant and diverse music culture, Linaje Originarios breaks the mold, choosing to rap not in Spanish, but in Embera, the language spoken in the indigenous reserve where they were born and raised.

Brayan, 17, and Dairon Tascón, 18, are cousins. They have lived their whole life in the Embera indigenous reserve of Marcelino Tascón, located in Valparaíso, Antioquia, about four hours south of the city of Medellín.

After catching wind of the video circulating on the internet, I decided to track down the cousins and within a few days, I set out to visit them in their home.

The journey had taken longer than expected, winding through diverse microclimates, over jagged Andean mountain peaks and through lush valleys filled with cattle and coffee plantations. The driver motioned for me that this was my stop: Valparaíso, Antioquia.

I scanned the small crowd gathered around to greet the travelers, looking for the faces I had seen in the rap music videos.

The cousins were waiting for me as I arrived. I introduced myself and we set out for their home, located on a hill above the pueblo. I felt the prickly heat of the midday sun on the back of my neck as we hiked away from the small town and into the mountains. We climbed up a steep dirt path towards an old wooden gate, which Brayan pushed out of the way, welcoming me to his family’s homestead nestled between sugarcane, yuca, plantains and medicinal plants.

Though initially soft-spoken and shy, the cousins transformed as I began to ask them about their music and the message they hope to share with others.

Brayan and Dairon started listening to hip hop at a young age in their indigenous reserve. Almost two years ago, they decided to try out rapping for themselves. As they describe it, they just did what feels right – instead of rapping in Spanish like the artists they are most inspired by, such as Tres Coronas, La Etnia and Ali A.K.A. Mind, they decided to rap in the language they feel most comfortable speaking – Embera.

Hip hop has long been a powerful vehicle for transmitting the messages of parts of society that often lack an outlet in public discourse.

For this reason, rap in Embera is not only interesting because of its novelty and the beautiful sound of the language. It is noteworthy because it represents the creation of a potentially powerful tool that can be used for the development of the political voices of indigenous communities, as well as an activity that piques the interest of younger generations of indigenous people in preserving and promoting their languages and cultures.

Through their music, Linaje Originarios seeks to address an issue that many indigenous cultures around the world are facing – the desire of younger generations to exchange their traditions, languages and lifestyles for life in urban areas where they have access to “modern” forms of culture, music and styles.

“A lot of people our age in indigenous communities are not as interested in speaking their family’s language or learning the traditions because they prefer to live in big cities in other parts of the country,” Brayan explained.

While the urban sprawl of Medellín lies just hours away, the cousins assured me that they are happiest in their indigenous reserve among their community. They believe strongly in the maintenance of their culture. Brayan’s father, a taita or shaman, supports the cousin’s innovative efforts to propagate their Embera heritage. Brayan, who is learning the art of medicinal healing from his father, has no intentions to leave his family’s past behind.

Dairon is equally dedicated to their goal of preserving his family’s heritage. Speaking in Embera (which was then translated by Brayan) he explained his intentions in their work. “Through our music, we try to recuperate our ancestral culture and our customs.”

While many might believe traditional indigenous cultures to be incompatible with “modern” and “new” forms of expression such as hip hop, Linaje Originarios demonstrates that the two are not only compatible, but that they can work quite harmoniously together.

The duo believes that by rapping in Embera, they can inspire other indig- enous communities to maintain their language and traditions by combining their current interests with the heritage that defines them and their families.

Their message isn’t just limited to people of indigenous descent. Brayan and Dairon are tuned in to their country’s history of war and the current prospect of peace, and it is their hope that their music can propagate the power of peace and positivity in other sectors of society as well.

“We try to spiritually combine the culture of rap and our culture to leave a message to humanity in hopes that everyone can have inner peace,” said Brayan.