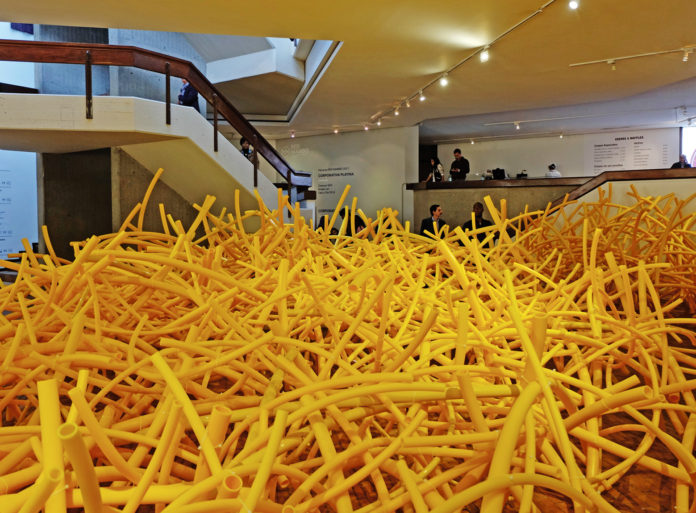 Bogotá’s Museum of Modern Art (Mambo) is celebrating its 55th anniversary with a gala designed by the famous events organizer Raúl Ávila of the MET Ball.

If you haven’t heard of Ávila, it is most likely that you haven’t been invited to the annual fund-raising event hosted by New York’s Metropolitan Museum in the Great Hall, an event widely regarded as the most star-studded in Manhattan.

Ávila’s colossal table and flower arrangements will grace MAMBO in a flowery tribute to a museum that for more than a half-century has kept its doors open while giving Bogotá world-class exhibitions.

Gala Mambo takes place October 27, with guests invited to a cocktail, buffet dinner, and art auction organized by Christie’s. Once the gavel is silenced, the after-party kicks in with a sound and light spectacle orchestrated by a DJ. For Claudia Hakim, director of MAMBO, the event’s main objective is to raise awareness among its benefactors of the importance in preserving the museum’s cultural and educational heritage; open to the public solely because of active membership programs and donations.

In recognition of someone who has played a fundamental role in developing Colombia’s cultural industries, the museum will hand-over its first MAMBO Award for Philanthropy in the Arts that same night. And, all funds raised from the gala will be used to maintain the museum in 2019, affirms Hakim.

In Colombia, the majority of museums are state-owned, and therefore, exhibitions as well as the price of admission are subsidized by the Ministry of Culture. In Mambo’s case, the museum must raise its own funds in order to keep its doors open, receiving some support from the ministry and district administration. As its name suggests, the Modern Art Museum of Bogotá, is an institution that has been fundamental in making sure the capital remains culturally relevant.

Drawing attention to the situation other private exhibition spaces face raising money, in February this year, MAMBO rocked the city’s cultural foundations to the core when a giant red banner draped the façade saying “For Rent.” The sign covering a building designed by Colombia’s famous architect Rogelio Salmona stunned many a passersby on the Carrera Séptima. A local radio station even began asking if the banner was a publicity stunt for an upcoming exhibition, or if the museum really was looking for a new home.

Less than two years into the directorship of MAMBO, Hakim set the record straight, confirming that the museum was overwhelmed by debt and donations of works by artists were able to settle monthly costs, such as the staff payroll. “We need COP$130 million pesos a month and we get $25 million,” remarked Hakim in an interview.

The For Rent sign was eventually shelved, but the invitation to artists and art collectives that the museum’s three floors, and auditorium, are available for rent with the Yo Tengo Mambo program, still stands.

According to Hakim, the “awareness exercise” is also a shout out to companies that MAMBO can be rented for educational and social responsibility activities. “If it had not been for the sign, nobody would know what was happening,” Hakim said. “I knocked on many doors and did not receive an answer. I thought a lot about the museum’s future and needed to act. It was not a decision taken lightly.”

Despite the financial obstacles of maintaining an art museum in the heart of the city, Bogotanos identify MAMBO with a collection that includes works by the most important artists of the 20th century, including Alberto Giacometti, Paul Klee, Joan Miro, Marc Chagall, Wilhelm de Kooning, Francis Bacon, Diego Rivera and Pablo Picasso. The Colombian collection is equally impressive with paintings, sculptures, and drawings by Alejandro Obregón, Edgar Negret, Enrique Grau, María de la Paz Jaramillo, Álvaro Barrios, and David Manzur.

While Gala MAMBO rolls out the red carpet for benefactors, friends of the museum, artists and government officials, it is also a way to host Bogotá with an installation created especially for an anniversary that marks more than a half century of achievements. But the real challenge will come after the gala, when having to be modern, means moving beyond uncertainty.