Faced with bland rows of multiplexes listing the same blockbuster releases, it is tempting to fall into a celluloid depression in Bogotá. Aside from occasional impractical late-night arthouse slots, the only place in the listings showing anything out of the ordinary in anywhere out of the ordinary is Usaquen’s Cinema Paradiso.

Cinema Paradiso (Cra 6 No. 119B-56) shows an interesting mix of mainstream and art-house films in opulent surroundings, a slice of Hollywood golden age glamour in the Colombian capital. But is this all the city has to offer the intrepid viewer? Upon delving deeper, Bogotá’s hidden cinema scene reveals everything from blurry projections on tattered screens in bars to long-established “cineclubs” and enthusiastic debates about camera angles.

Colombia has produced a host of film clubs: from the original Cineclub de Colombia (founded in 1949) through Andres Caicedo’s famous Cineclub de Cali in the early 70’s to more contemporary organizations such as the Universidad Central’s Cine Club. With three decades of uninterrupted projection, the Universidad Central Cine Club is one of the heavyweights not only in Bogotá but nationwide. The Sala Fundadores (Cra 7 No.22-79) is the Central Cine Club’s base of operations, and currently this space is being shared by the Cinemateca Distrital while this other longstanding organization has its premises renovated. This means a cinematic bonanza for viewers as large quantities of high quality national and international films are screened in one convenient location.

Ivan Acosta, Director of the Cine Club Central and President of the National Association of Cine Clubs, believes that while the phenomenon of these screening groups in Colombia has its origins in an intellectual and academic movement, it owes its continued success and popularity to a wider audience. “Cinema in Latin America has always been a social phenomenon. The Golden Age of Mexican cinema coincides with the beginning of the cineclub movement in Colombia. The public began to become interested not just in seeing the movies but also learning about how these were made.”

This popularity continues to this day with a diverse selection of capital dwellers taking advantage of the Cine Club’s affordable prices and varied programme. An average audience is pure mixture – from students and office workers to old age pensioners, and for Acosta the presence of these last viewers is particularly gratifying.

“Sometimes you’ll see the older members of the audience engaged in heated discussions with the younger ones, debating techniques or reminiscing about cinema in years gone by. These seniors are incredibly knowledgeable about the cinema and often they were involved in film movements in their youth.”

The Central Cine Club – and others like it in Colombia – has evolved through the years like celluloid. 35mm projections exist alongside video and digital media. For Acosta, the next big movement however will be a social one. “We are working on the creation of a social film club using the cultural and academic force of the organization to involve people from marginalized spaces in the city in the production of images.” Returning to cinema’s popular roots and using culture to reconnect people in isolated areas of Bogotá – the future looks bright for the club.

Several museums also run regular cinema screenings with the best of the bunch being the Museum of Modern Art (MamBo) and the dinky Museo de Arte y Cultura. This latter may not be one of the biggest or most famous of the capital’s museums but its extensive cultural activities make it worth seeking out.

Located on Calle 36 beside the Parque Nacional, the Museo de Arte y Cultura has a tiny projection room tucked away among a tantalizing bookshop and gallery rooms where films are beamed onto a wall before rows of seated spectators. Films are shown in thematic cycles and each showing is followed by an informative talk and audience discussion. A run of films by female directors showed Colombian viewers the grittier side of urban Europe through films like Andrea Arnold’s “Red Road.”

A few blocks further south viewers sit cozy and illuminated by the glow of the screen in a small auditorium of the MamBo. Rows of itchy seats face a small screen projecting a slow-moving Patagonian road movie. The blots and lines appearing periodically on the crackling screen along with the whirr of the projector give this cinema a vintage feel, reel escapism from the grey rain of a Sunday afternoon.

If you want to combine your film with a mulled wine or keep out the chill of a Bogotá night head to Cafe Cinema on the corner of the Carrera Séptima with Calle 55. An eclectic selection of films are projected onto the back wall while viewers lounge in plush seats seemingly salvaged from an elderly bus, sipping from glasses of steaming wine with frosted sugar rims. At $5,000 per showing – including hot beverage – this is an agreeable and economical option for whiling away some hours. Screenings are Monday, Tuesday, Wednesday at 5:00 pm.

The charm of these cinemas lie in their survival as an antidote to main- stream movies and the uniqueness each one projects. No matter in which you find yourself as you settle down in the chair and watch the blurry screen rear-range itself into a sharp image, you become part of a community of cinemagoers, scattered across the city but united by a love of the seventh art. 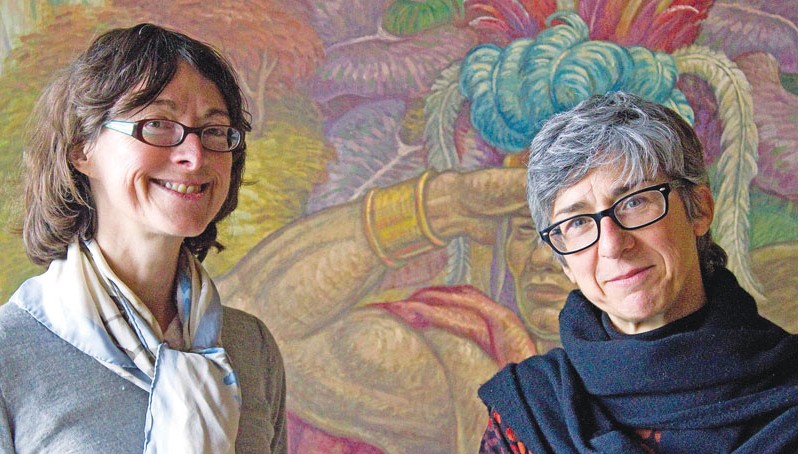 From Olympus to Macarena