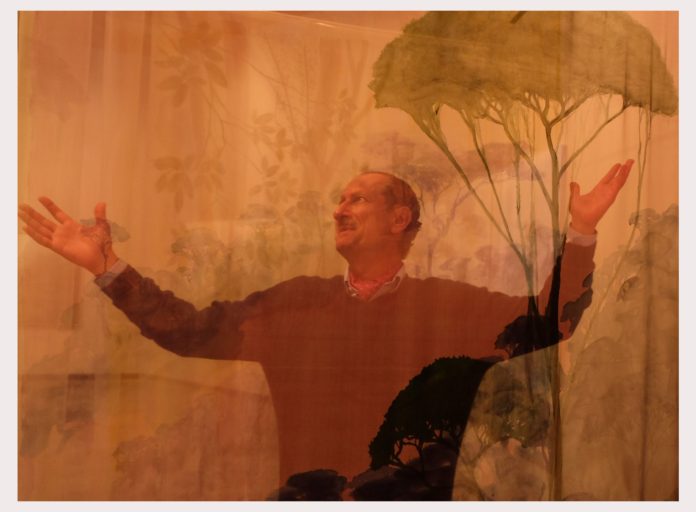 Jorge Cavelier is an acute observateur of nature, elevating the canvas to a Zen-like state of meditation. The Colombian artist’s fascination with landscape stems from his childhood, observing how light hit trees during weekend escapes to his family’s farm in Tabio, Cundinamarca.

Landscapes, from mist-engulfed Andean cloud forests to monolithic rock formations rising out of an horizon of blue, are moments of contemplation in a career that spans continents. But Cavelier’s artistic path hasn’t always been a luminous one, as his current exhibition ‘Formas del Tiempo’ (Shapes of Time), may suggest.

On July 8th 1999, Jorge and his wife, Margarita Lega, were taken from their home near Bogotá by the Revolutionary Armed Forces of Colombia (FARC) guerrilla. Like most kidnappings during this dark episode in recent Colombian history, it was economically motivated, and until a ransom was paid, there could be no possibility of liberation.

Mr.Cavelier spent six months blindfolded in a room “somewhere near the Madgalena River”. When he recalls details of his kidnapping, there were coffee groves, as the couple were hidden at the heart of a plantation, and he could only communicate with his wife, Margarita, through whispers. Moments of humanity were few and far between, such as when FARC gave him a blunt pencil and notebook so he could sketch – but under one condition – he didn’t draw the faces of his kidnappers. Margarita remained a hostage of FARC for a year.

Upon his release, Cavelier returned to the studio and presented for The Americas Collection “Laberintos – Labyrinths”, a series that, in his words, represents “a return to the center, back out into the world.” The artist admits that the kidnapping, with its absence of light, created “much darker” works.

But the light has returned on 50 canvases at the LamaZone Gallery, and where until mid June, Cavelier’s Formas del Tiempo are exhibited. Translated in English as ‘Shapes of Time’, these detailed works of pencil sketches, watercolors, ink on paper miniatures, are accompanied by a series of suspended tapestries of watercolor on silk cloth, inviting guests to wander through the artist’s imagined forest, meandering flowing branches and elongated tree trunks.

Born in Bogotá in 1954, Cavelier studied painting at the National University and the Academy of Fine Arts in Florence, Italy. “If there is one place, I could consider home, it’s Florence,” says the artist, who after his ordeal at the hands of the Marxist rebels, left Colombia for Coral Gables, Miami, from where he paints and exhibits regularly.

Even though the Colombian landscape is at the heart of Cavelier’s visual journey, there are no geographical references to specific places. “Landscapes don’t change, we do”, says the artist from behind a translucent silk pane; and who, with his Shapes of Time, has created an impressive body of work drawing us towards the “center” of an eloquent and refined imagination.

The Galería LamaZone is participating the weekend of May 20-21 in the Bogotá International Art Fair’s (ARTBO) Fin de Semana project in which 42 gallery spaces have extended their hours to showcase the works of important national and international artists. Admission is free.