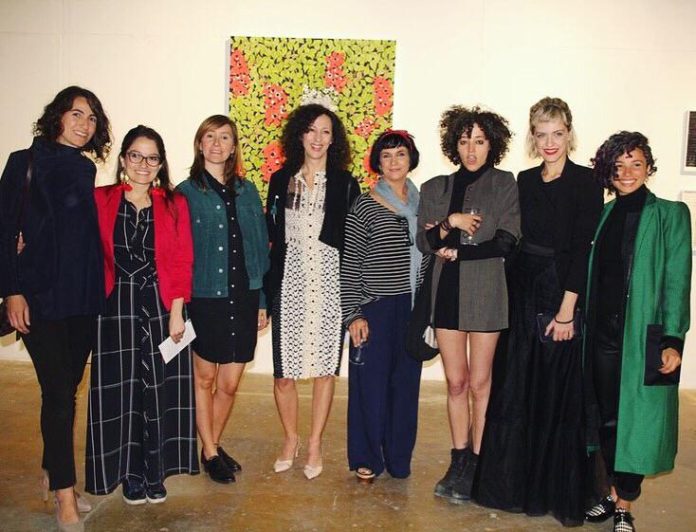 The gallery hummed with the anticipant air of an exhibition before opening time. In the lofty and bright space of the old biscuit factory in London’s Bermondsey, Daniela Galán welcomes guests to the first ever Amalgama exhibition. As she begins to show the work of each of the seven Latin American artists carefully placed around the room, something became immediately clear. This is not just about art, this is a revolution.

The exhibition, she explains, is the first event of her new organization seeking to transform the face of the Latin American female art market. Many women, Galán expands, face a multitude of challenges in trying to access the market. From archaic stereotypes that women pose a risk of stop-gaps in production during motherhood, to the very notion of what art actually is, the organization will work to break cliches and connect women to galleries and buyers.

Inspired to curate the exhibition in connection with this year’s first Festival of Latin American Women in Arts (FLAWA) held in London, Galan’s strategy in the short term centres around yearly exhibitions that will create dialogues on the major thematic challenges facing Latin American female artists. Take Amalgama for example, each of the seven women chosen to exhibit represent artists from different Latin American countries whose primary art practice is now located in Europe.

The challenge their work represents is the tension of developing a unified Latin American cultural identity in their diaspora. Can the artist ever alienate themselves from the artistic influence of their host countries, and if they do succumb to it, does it make it any less “Latin American” art? Playing cleverly on the meaning of Amalgama, or amalgam in English, the exhibition displayed artists on both sides of the argument, some representing that blend of home and host country influences. Taking the meaning even further, however, is the consideration of Amalgama with regards to mercury in metallic chemistry. Considered historically as “the original metal,” an amalgam is an alloy of mercury with another metal. Likening mercury to colonial Spain and Portugal, Galan explains how their influences blend with those inherent to the Latin American states making it difficult to extract their presence in developing and considering a cultural identity of art. Furthermore, the experience of war, violence, and strife in many Latin American countries can engage a market only interested in a “piece of the violence” – artwork that engages the themes of suffering.

Bringing such topics to the debate table, Galán convened her first industry panel on the back of the Amalgama exhibition. Featuring prominent market experts such as Sandra Higgins, independent curator and former vice-chair of London’s Chelsea Arts Club, the conversation will soon be brought to a wider audience in the publication of a book this Autumn. Featuring an introduction from Galán herself and several written contributions from across the market, the book will delve further into these themes through the lens of each of the exhibited artists’ work and experiences.

Looking to next year, the plans for the organization’s second exhibition are already well underway. Due to take place in early Spring, Galán will continue with the theme of Amalgama, but with a key twist. Next year she will turn the tables and focus on European artists whose primary practice is now located in Latin America. Already in the search of established artists to headline the exhibition, she is also developing plans to widen the search to include emerging artists as a part of her mission to integrate social mobility into the long-term goals of the organization.

As she envisions the future, Galán plans to establish a panel of experts to support and influence each exhibition and the wider organization mission at large. She also aims to establish a digital platform to source and discover both existing and emerging Latin American female artists. Further ahead, Galán plans to incorporate educative aspects to the organization, to discover and support emerging art talent from disadvantaged women all across Latin America.