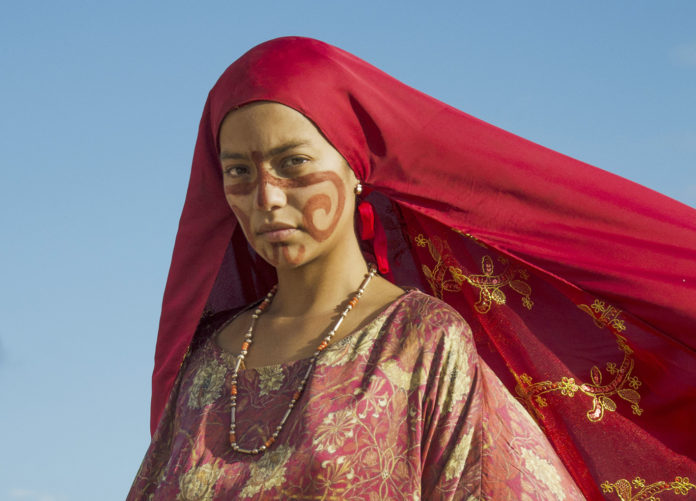 This is a tale that makes Shakespeare’s tragedy Romeo and Juliet pale in comparison. Set in the sandstorms of La Guajira’s brutally unforgiving landscape, where wattle and daub huts are hemmed in by towering cactus forests, Pájaros de Verano (Birds of Passage) is a film rooted in the decades-old feud between two powerful clan families, Valdeblánquez and Cárdenas, who annihilated each other for control of the lucrative marijuana trade that flourished in this drought-stricken department during much of the 1970s and 1980s.

Lavishly shot by the 2016 Oscar-nominated duo Cristina Gallego and Ciro Guerra of El abrazo de la serpiente (Embrace of the Serpent), Birds of Passage took flight last month in Cannes at the Directors’ Fortnight, and given the accolades from “art-house thriller” to “superbly crafted,” this epic story of tribal revenge and bloodshed hits screens across Colombia in August.

Guerra’s and Gallego’s latest storytelling odyssey takes audiences to the heart of the boom-or-bust culture of the Bonanza Marimbera – a chapter in Colombia’s bloody drugs history when all that flowed across this peninsula were crates of whiskey and bales of marijuana strapped to the backs of mules.

Filmed over nine weeks on locations near La Guajira’s capital, Riohacha, including the palm-lined beaches of the Tayrona National Park, “Birds of Passage” stars Natalia Reyes as Zaida, a young woman of the Wayúu indigenous people, who after three years of confined to her ranchería (a family owned township) as part of her coming of age ritual is offered in marriage to Raphayet Abuchaibe (José Acosta). As the Wayúu are staunch matriarchs, grandmother Ursula Pushaina (Carmina Martínez) negotiates Zaida’s dowry.

In this ancestral territory where goats are currency and the law is never written, rather defended by the community’s word guardians – palabreros – Raphayet keeps his oath to find the dowry, but 50 goats, 20 cows and ceremonial necklaces are a financial burden, so he begins to traffic in liquor. He quickly realizes that contraband whiskey is less lucrative than marimba – colloquial term for marijuana, and with so much weed growing in the foothills of the Sierra Nevada de Santa Marta, together with his friend Moises (Jhon Narváez), they make contact with some hippie gringos volunteering in the country. A turf war then breaks out in Ursula’s ranchería, between arijunas (outsiders) and the orthodox godfathers of the Wayúu.

Told in both Spanish and the indigenous language Wayuunaiki, Birds of Passage bring to the screen Wayúu cosmogeny, from chirrinchi drinking prenups to the revolver protected belief that human life is measured in goats and gold. “It is essential that stories are told in their language. Our interest is to break the barriers of cinema, and Colombia can enrich world cinematography in this way,” said Guerra during the premiere at Cannes and first feature ever to use Wayuunaiki.

“In Birds of Passage, greed is the dark undercurrent that threatens to corrupt the Wayúu way of life”

According to film critic Peter Debruge of Variety magazine, “few films have captured quite so powerfully the tension between the old and new worlds – a feat Birds of Passage accomplishes while simultaneously allowing audiences to channel the Wayúu’s surrealistic view of their surroundings, where spirits walk the earth, and wise women interpret their dreams.”

From the opening titles that proclaim “the origin of the drug trade” to Ursula’s ominous warning that she is “capable of anything” to protect family and clan, Birds of Passage is as much an ethnographic portrait of a fiercely proud tribe, bound together like the woven fiber of their mawisa sombreros, as it is a contemporary love story of betrayal and defending family honor. Think Don Corleone in shades, sitting under an enramada (thatched hut), surrounded by mochilas and mini Uzis, and you have the visual landmarks of the marijuana bonanza. And no film about drug syndicates in a desert is complete without Cessnas hawkishly landing among goat herds to pick up the illegal cash crop. Guerra and Gallego though, pull it off with acute historical accuracy.

In Birds of Passage, greed is the dark undercurrent that threatens to corrupt the Wayúu way of life, evoking a similar theme that catapulted the co-directors to international acclaim with Embrace of the Serpent, and that explored how the indigenous cultures of the Colombian Amazon were enslaved by explorers, missionaries and rubber merchants.

From enduring tropical downpours in the Amazon to filming in the sweltering heat of La Guajira, Guerra and Gallego put cinematic storytelling to the test, empowered by Colombia’s sweeping landscapes and legends that no matter how local they are, have universal appeal. “Like the desert, beautiful but tough; we faced challenges and difficulties,” explains co-director and producer Gallego. “But we went ahead to make possible the impossible, motivated, and strengthened by the love to tell our story.” And a Shakespearean-style tragedy that will keep audiences glued to their hammocks.