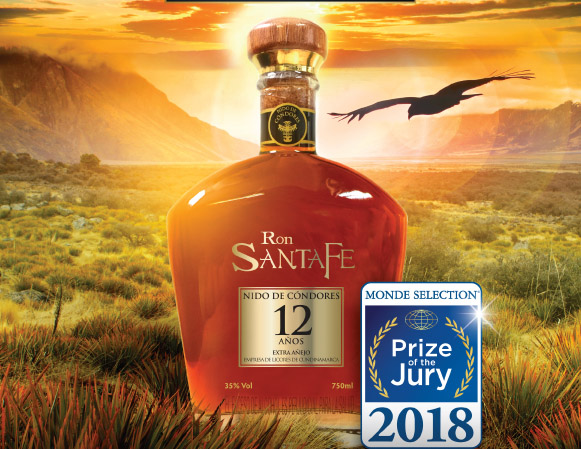 Selected from 350 spirits nominated for the 2017 Monde Selection, the prestigious jury unanimously chose Ron Santafé Nido de Cóndores as the only recipient of this award, and only rum from Latin America.

Receiving international recognition for an aged rum, made from Colombian sugarcane, Nido de Cóndores now has the exclusive Monde Selection seal that ranks it among the finest in the world. With its bright color, woody aroma and chocolate and tobacco flavor, the rum is 35% proof and comes branded with the condor – bird of Cundinamarca.

According to a quarterly report by the Colombian Association of Liquor Vendors (ACIL), Empresas de Licores de Cundinamarca returns to the first place in sales in the country with its flagship product Aguardiente Néctar, selling 5 million units, compared with competitors Aguardiente Blanco del Valle (3,4 million) and Antioqueño (2,3 million).

Aguardiente Nectar remains the No. 1 “top of mind” brand for Colombians, in the category of spirits, with 37% of the total market share, followed by 32.8% for Antioqueño and 13,3% for Blanco del Valle. Empresas de Licores de Cundinamarca operates the largest liquor plant in South America and the largest in the country. The company was established in 1905 with the purpose of producing perfumes and essences. During 1931 it became classified as a liquor factory, dependent on the Ministry of Finance of the Department of Cundinamarca.

Arrival of GTA flight simulator opens up Colombian skies for...