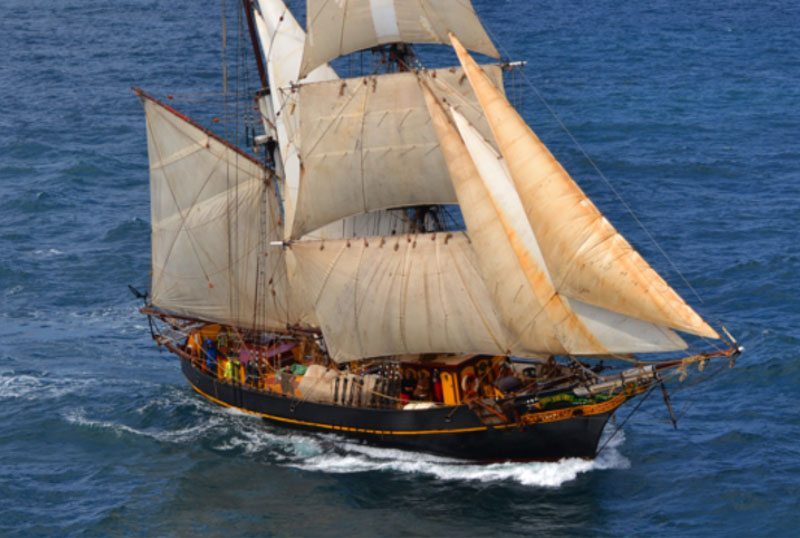 What’s the best way to ship premium fair-trade mountain-grown organic Colombian coffee to the rest of the world? By emission-free, fossil-fuel-free sailing ship – of course!

And that’s exactly what the ‘Tres Hombres’ have set sail to do.

The Tres Hombres is a 32-meter brigantine sailing ship that docked in Santa Marta harbor recently. The tres hombres on board were loading her up with organic cocoa, Caribbean rum, and organic Colombian coffee for shipment across the sea to Europe.

The sailing ship is not a Windjammer-style ‘cruise ship’, but rather a full-blown transport vessel, using the same ‘clean energy’ that sailors have used for centuries – the wind.

The ship’s namesake, the real three hombres, are Andreas Lackner, Jorne Langelaan and Arjen van der Veen, the Dutch founders of Fairtransport Foundation, the pioneer movement to promote sustainable shipping – powered by the wind – throughout the modern world. Their ambitious vision is to have a world where all ocean transport is under sail, and their immediate goal, in addition to shipping fair-trade goods, is to “open up the modern market and people’s minds to this alternative.”

“Consumers and producers are responsible for what they buy or transport,” they told me as they shopped for an additional 1,000 kilos of organic coffee in la Sierra Nevada de Santa Marta recently, “so we want to offer a sustainable choice.”

In 2007, the three friends began a shipping company. While sailing on the Dutch sailing baroque Europa, Arjen, Andreas and Jorne saw the beauty and power of great sailing ships that use only the wind as a means of propulsion. They decided to create the world’s first modern “emission- free” shipping company, based in the Netherlands. Originally named the “Stichting Atlantis Zeilende Handelsvaart”, the company has grown into what is now known simply as “Fairtransport.”

After the restoration of the brigantine Tres Hombres, the ship was the first to join the Fairtransport fleet in transatlantic emission-free freight service to the Caribbean from Europe. As the world’s only engine-less sailing cargo ship, she has become quite famous in her own right. The company has since expanded, with plans to put the world’s first 130-meter Ecoliner and a 3-masted Clipper Ship on the seain the near future.

The 32 meter schooner Tres Hombres has been sailing since December of 2009. She will maintain a shipping route for transport of cargo between Europe, the Islands in the Atlantic, the Caribbean and America. In addition to her capacity for 35 tons of cargo she has accommodations for a crew of five professional sailors and 10 ‘seafarer trainees.’

For those of you who are sailors – or seafarer trainee wannabes – the Tres Hombres carries a full complement of 12 sails, however she has set as many as 19 sails during the calm Caribbean crossings. She carries three studding sails, a ‘Jimmy Green,’ a Bonnet, a Raffi, a Watercatcher, and plans for a ‘Ringtail’ are underway. A trans-Atlantic crossing takes about two weeks.

It is the prime intention of Fairtransport Foundation to sail cargo emission-free, with a focus on transporting special products which are organic, or crafted traditionally – such as olive oil, wine and rum – and of course, Colombian coffee. Additionally, they hope to raise awareness about the huge amounts of pollution created by the modern shipping industry, and affect positive change in the way goods are shipped around the world.

For more specifics on Tres Hombres visit Fairtransport Foundation http://fairtransport.eu/ships/tres-hombres/ – you can also pinpoint the location of the brigantine wherever she is in the world – in real time! And you can also learn about opportunities to sign on as a ‘seafarer trainee’ – for a few days, or up to half a year.

Putting out a bureaucratic fire