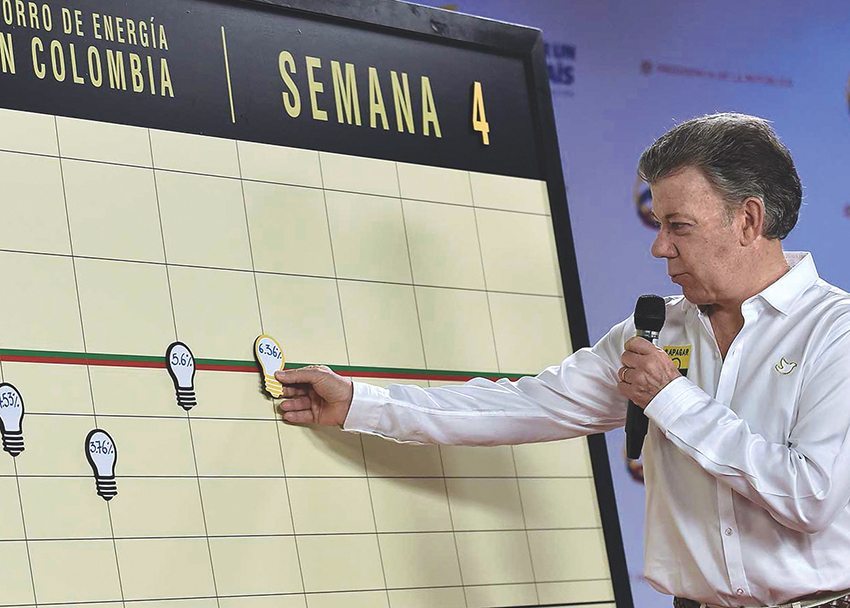 [dropcap]C[/dropcap]olombia’s electricity supply was threatened this year when a nationwide drought slowed the mighty rivers that power the nation’s grid. President Juan Manuel Santos told companies and citizens to cut their energy use or prepare for blackouts. In Bogotá, this rekindled bad memories of the widespread energy shortages in 1992 and led many to question how a nation that has made so much progress since could once again be left in the dark.

To everyone’s delight, restrictions were never imposed and the lights stayed on. Santos had devised a plan. He enacted measures to lower energy bills for anyone who cut their household consumption. “We’re going to reward savings and punish wastefulness,” said the president. “We have to make a true savings crusade if we want to avoid preventive energy cuts and rationing.”

While the proposal produced limited benefits, the crisis was eventually staved off when the rains returned. A severe El Niño cycle led to a lack of precipitation and slowed generation in a country that gets about 70% of its power from hydroelectric plants. But that weather phenomenon subsided, and rivers such as the Magdalena are flowing fast again.

Other extenuating circumstances also triggered the crisis. A fire at a plant in Guatape cut 11% of capacity for weeks. A damaged turbine at a thermal plant in Medellín further weakened supply. And these combined factors forced Colombia to import power from Ecuador and compelled the national energy minister to resign.

A new minister of mines and energy, Germán Arce Zapata, was sworn in on May 2 and spent his first weeks in office discussing new electricity plans while visiting underserved regions along the Caribbean and Pacific coasts.

Arce hyped the multimillion-dollar “Plan5Caribe” initiative to expand the grid on the Caribbean coast that the Santos administration launched in June 2015. He stressed that “there should not be a single family without energy” during a stop in Buenaventura. Two weeks later, the minister spoke in front of the senate in Bogotá. “The crisis we have just gone through with the El Niño phenomenon shall help us to reinforce the electrical system,” said Arce.

Many remain skeptical, however, and this year’s developments have given the Santos administration little leeway. Even before the energy crisis, the president earned enemies by selling off the nation’s enormous public energy utility to a Canadian firm in January.

Santos turned over nearly 60% of Isagen to Brookfield Renewable Energy Partners for roughly US$2 billion in a controversial move that was opposed by senators, labor unions, and other stakeholders. Many Colombians were simply against selling a lucrative, well-run asset that has long been a source of national pride to a foreign firm. Others complained that Brookfield was also the only bidder and that the price may not have been right.

That saga was a year in the making, with Congress members originally succeeding to block Isagen’s sale in May 2015. But those complaints were later overruled by a judge. After the decision, Santos, who wanted the incoming revenue to fund Colombia’s massive “4G” highway and transportation renovation project, was free to make the move. But he has not been free from the scorn that followed.

Despite the political rancor, there are reasons for optimism about the national grid. In terms of its quality of electricity supply, Colombia ranked 59th among the 140 nations analyzed last year by the World Economic Forum. That leaves much room for improvement, but the organization put the nation far above the global average score and well ahead of regional peers like Mexico, Brazil, Ar- gentina, and Peru.

The World Energy Council offers an even better outlook. It ranks Colombia 13th in the world in terms of energy security and third in an environmental sustainably index that measures the development of energy supply from renewable and other low-carbon sources.

Bodies like these view the nation’s electricity situation as sitting on a solid foundation. And the grid should only be further improved by investment plans that are already underway. From this perspective, it is easy to see this spring’s energy crisis as a weather-related anomaly that Colombia was still able to sidestep — and will be better prepared to deal with next time El Niño hits.

But nothing that has happened this year has won many converts to this standpoint. With the president appearing on television to urge citizens to cut their power consumption, a resignation in the cabinet, and the sale of an admired national energy utility, the causes for concern are louder than all the other data points. This is true from the halls of the legislature to the millions of humble homes in areas where there is no guarantee that the lights will come on when you flip the switch. For all the positive metrics offered by the World Energy Council, it ranks Colombia 57th when it comes to the accessibility and affordability of energy supply across the population. As with most resources in the country, the distribution is far from equal across geographies and social strata.

“I remember once that I went to a very, very poor village on the Colombian Pacific and took energy to them,” said Santos at a 2014 World Energy Council event in Cartagena. “At the time they treated me as though Jesus Christ had come, simply because they could turn on a light bulb and have a fridge in which food could be preserved. The change of life is enormous for someone who has never had energy and now has it.”

Though not always so melodramatically, Santos has continually touted the progress his administration has made on electricity. Now, with all the problems facing the sector in 2016, nobody is taking his claims on faith anymore.

Santos and the Colombian government will have to prove to citizens and foreign firms alike that the grid is growing. He needs to convince everyone that the nation can continue to meet its rap- idly growing demand for power.

The rains saved Santos the last time. He may not be so lucky when the next crisis hits.