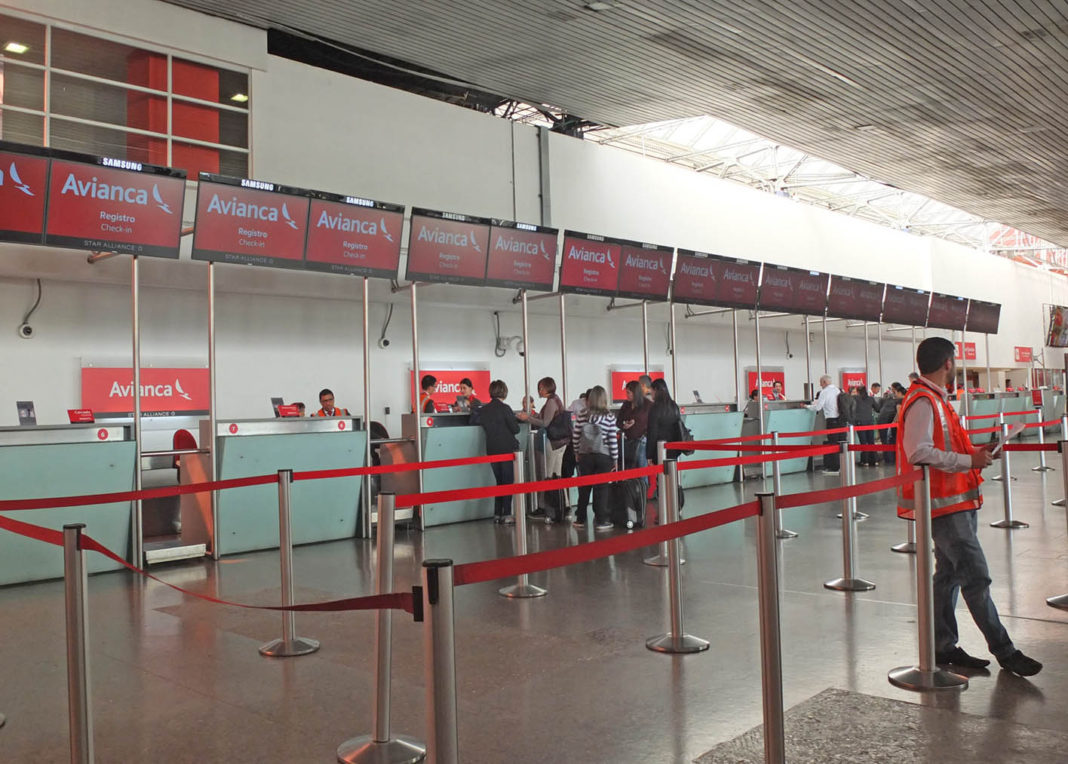 The domestic terminal of Bogotá’s El Dorado airport teems with travelers on any given afternoon, as Puente Aereo connects the Colombian capital with the country’s small cities and popular travel destinations. But on Wednesday, as the first official strike day by Avianca pilots affiliated with the Asociación Colombiana de Aviadores Civiles (ACDAC) union began to impact travelers, ground operations workers also walked-off the job, parading through the main Departures hall, waving flags and chanting: “Yo Soy Avianca!”

A handful of frustrated passengers looked on. “It’s their constitutional right to protest,” says Jaime Durán, whose flight to Popayán appears to leave on time. “I was prepared for the strike, so I came here early.”

According to the airline, as soon as the strike began at 4:00am, 54 pilots failed to report to work, disrupting early morning departures to business hubs, such as Cali, Barranquilla and Medellín. But talks between the ACDAC and airline began to break down more than a week ago, giving Avianca time to set in motion a series of contingency plans, that includes suspending for three days (Sept 20 to 22) all domestic and international tickets sales and setting up a website www.aviancaultimahora.com so that passengers can check the hourly status of their flight.

The airline has also announced that all passengers who want to make changes to their itineraries can do so free of charge. The airline will refund 100% of all tickets, should passengers decide not to fly. And preparing for confusion at airports, Avianca has added an additional 200 ground staff to help passengers make their flights and connections.

As the union and airline resumed talks Wednesday afternoon, the first day of the strike disrupted 150 flights – 60% of Avianca’s operations. In terms of the airline’s passengers, some 18,000 were affected. Delays were reported on certain international flights (mostly within South America) but by late afternoon, the airline’s long-haul flights to Madrid, New York, London and Barcelona were all scheduled to depart on time.

Avianca’s President Hernán Rincón has regretted the strike action saying: “it is sad to see how 300 of our 23,000 employees, can affect our operations like this.” Avianca claims the action is “illegal” as it gave a wage and benefits increase to all its employees at the beginning of the year. The Colombian flagship has not faced a labour dispute since 1994, 10-years before Brazilian investor German Efromovich of Synergy Group took control of Avianca, and one of the most respected names in Latin American aviation.

The strike only affects Avianca Colombia, and not other airlines belonging to the parent company Avianca Holdings. Avianca Colombia controls 60% of the domestic market share, transporting close to 55,000 passengers every day.

According to Mr.Rincón, the ACDAC strike is costing the airline an estimated US$2 million per day, and claims the airline can resist a 90-day strike. Within the next 60-days, a judge must rule if the strike is legal or not. “The company is very solid financially,” said Avianca’s senior executive, Monday night. “We have done an extraordinary job strengthening the company. But my concern is the country. Can Colombia run on half of its flights?”

The airline claims it presented 20 proposals to the ACDAC union – all of which were rejected. In April, the airline increased salaries 12 percentage points to all pilots, affiliated to the Organización de Aviadores de Avianca (ODEAA) and ACDAC. The union is now demanding an additional 60% increase. Among the grievances is the issue of rest days and workload. Currently, Avianca pilots get nine rest days per month, but the union is asking for an additional eight – or total of 17 rest days every month. “There is no pilot in Colombia who earns more than the pilot affiliated with ACDAC,” said Rincón to CM& news.”The pay of a pilot belonging to that union is the same as a Senator.”

As the company and union try to reach common negotiating ground, the skies over the region have witnessed their share of chaos with hurricanes Irma and Maria forcing Avianca to cancel flights to Caribbean destinations, such as Punta Cana in the Dominican Republic and San Juan in disaster-struck Puerto Rico. On Tuesday, Mexico City’s international airport shut down after a 7.1-magnitude earthquake struck the country.