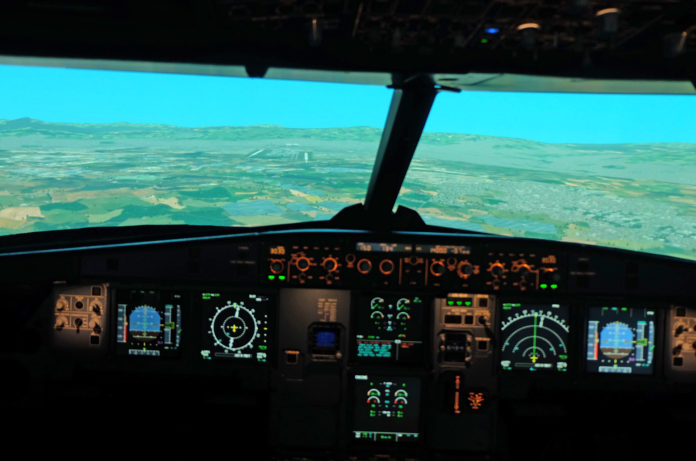 I gently push the throttle forward toward the instrument panel with the nose of the Airbus A320 poised on runway 31L. In the distance, Bogotá’s Colpatria Tower glistens under blue skies, with Monserrate and the Cerros Orientales rising above a ground elevation at SKBO (El Dorado) of 2,548 meters. Accompanied by instructor Daniel Calle in the cockpit, my take-off entails a sharp turn south at 9,200 feet and steady climb to 21,000 feet.

Even though I consider myself to have sufficient aviation knowledge to identify aircraft, liveries and airport codes, I have never actually flown a plane, until given the chance with the acquisition of an A320 simulator at Global Training Aviation (GTA).

Built by the Spanish IT company Indra for the Toulouse-based aircraft maker, the GTA-operated Level D simulator arrived in Bogotá in April to train certified pilots from across the region, and the first of its kind to incorporate state-of-the-art optics and flight variables. Housed inside a giant facility of the Free Trade Zone of Bogotá (Zona Franca), the A320 moves on four electric actuators and that react instantaneously to flight data. And cockpit, the exact replica of an aircraft considered to be a workhorse of the industry. According to Gabriel Sánchez, director of GTA, the arrival of the simulator in Colombia shows confidence by the international aeronautical community in Colombia’s capacity to train integral pilots who show a commitment to the profession. “It’s about quality over quantity,” remarks Sánchez from a conference room with a birds-eye view of the expensive machine. “Our main niche are the airlines, and as every year, pilots have to pass through a simulation and training evaluation, the process becomes very cost-effective for clients to do the certification process here, rather than sending crews overseas.”

As the Airbus rises into clear skies above Bogotá, I am pushed back into my seat from the thrust of non-existent Pratt and Whitney engines, and engulfed in a computer-generated panorama of the Andes, beamed from above onto an infinite screen. With stunningly real visuals of landmarks – man-made and natural- I veer south over the factories of Fontibón, shifting the side-stick as if playing a videogame. Keeping the plane balanced and moving (forward, I hope), I imagine a cabin filled with passengers, strapped in their seats, and unaware that this “First Officer” has never flown an Airbus before. Withing minutes after Rotate, the landscape quickly rolls past me, and the Nevado del Tolima appears on the horizon. The weather conditions are still favorable at 21,000 feet until “Danny” imparts instructions over the headset: “Roll up some bad weather and add crosswinds.” Within seconds, the view from my window of the snow-capped Parque Nacional de la Nevados becomes shrouded in grey and ice pellets blast the cockpit window. The passengers are getting nervous and I imagine that the inflight service has to be suspended.

Programmed with every climatic condition and emergency situation a pilot may face, the Level D Full Flight Simulator comes with a hefty price tag of USD$13 million. “There are situations that most likely will never occur during the career of a pilot, but are incorporated into the software, should we require them,” remarks Sánchez. “Here, you can fail 30 times in a day, and walk away. Something you can’t do up there.”

Cost-efficiency is at the heart of flight simulation as pilots can land an A320, four or more times in under 20 minutes, perfecting approach and touchdown. The D classification also demands that the manufacturer of the simulator has to have the exact visibility within a range of 30 miles of what a pilot sees in real life; and every action, inside the cockpit, is also recorded in order provide valuable feedback during mandatory debriefing.

As I reach cruising altitude and take in scenic views of the Magdalena valley from 21,000 feet, Danny takes over the controls and tells a systems engineer at the base of the tilted machine to create the scenario for a night landing. In a flash, the cockpit becomes pitch dark and the small towns that dot the pixelated foothills of the Eastern Cordillera begin to sparkle around me. Clasping the yoke and staring at an orange ring of light that is the Colombian capital, I feel a sense of vertigo and dip the nose of the Airbus downward. Soon, the runway at El Dorado comes into range and a voice suspended above me remarks: “One thousand.” Lined up for landing (and making sure the wheel level is down), I successfully manoeuver the Airbus to the tip of the runway, and even though my imaginary passengers may be reaching for the air sickness pouches, I manage to land and in the process, save many lives. After 30 minutes in Colombian skies, and equivalent of a routine flight from Bogotá to Medellín, I unclasp my seatbelt with a bizarre sensation that even though I had journeyed some 200 nautical miles, I never physically moved an inch.

With plans to incorporate two more flight simulators in the GTA warehouse over the next several years, Bogotá is positioning itself to become an important training hub for pilots across Latin America, and given a rare opportunity to fly a modern A320, I now feel the sky is the limit, even if this for me, means sitting in Economy. 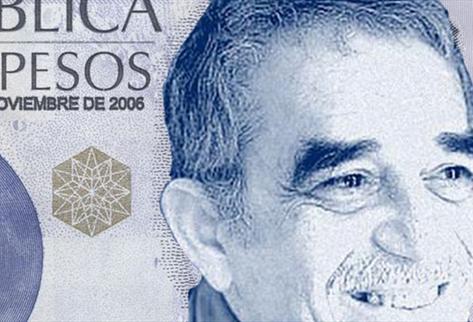