During much of the last century, Bogotá ranked with Buenos Aires as the most European of all South American cities. Bogotanas would stroll the Séptima wrapped in furs and men in Savile Row tweed. With many Universities, libraries and theatres to choose from, the Colombian capital was known as the ‘Athens of South America’ while Buenos Aires, thanks to its broad avenues inspired by Baron Haussman, took top honors as the Paris of continent.

From its colonial enclaves at the base of Monserrate and Guadalupe mountains, to the rising middle class neighborhoods with red brick Tudor homes near parks and lakes, such as Lago, Chapinero and La Merced, Bogotá was a city nourished by water long before the arrival of the Spanish to the highlands. With an abundance of cold mountain streams and two rivers which marked the limits of the early Muisca settlement Bacatá, the Vicacha (San Fransisco) and Manzanares (San Agustín) rivers, after the city’s official founding by Gonzalo Jiménez de Quesada in 1538, water played an essential part in Bogotá’s growth and identity.

Like the Incas of Peru and the Mayans of the Yucatán, the Muisca documented divinity with the alignment of planets, planted according to lunar cycles and built elaborate canals to guarantee the flow of water through fields. Thanks to a rational use of this resource, the Muisca survived droughts and sickness. When conquistador Jiménez de Quesada first stepped foot in this high altitude wetland – the Sabana de Bogotá – the mission became conversion rather than conservation. The large oak trees which were worshiped as fertility symbols by the Muisca were cut down and replaced with a European import, the Eucalyptus. The Eucalyptus tree helped dry out the lakes of the Sabana de Bogotá and streams were redirected to make way for streets.

Clara Inés Ángel is an investigator and professional art restorer who felt compelled to search for the fountains of her parent’s (and grandparent’s) youth. Growing up in Bogotá during the late 1950s and 60s, she recalls the city’s memorable green spaces, its parks such as Independencia and Centenario, all of which were graced by circular stone pilas (fountains).

Wanting to research the history of water in Bogotá, Ms. Ángel teamed up with museologist Clara Isabel Mz Recaman de Uribe and applied from the Mayoralty a grant directed by the Institute of Cultural Patrimony. The objective was clear for the investigators: “If people from around the world flock to Rome for its Trevi fountain, why can’t the city preserve its monuments?”

Founded around a fountain

As the city grew from its heart near the Chorro de Quevedo fountain, in La Candelaria, many of the stone pilas which adorned courtyards and the entrances to churches and convents as well as historical homes such as Simon Bolívar’s Quinta, were taken down and stolen during the expansion of public works during the last two decades. Razing to the ground many of the city’s historical sites and replacing them with bland concrete buildings has not been one of Bogotá’s proud moments and in recent years, the mass student marches and civilian outbursts against government policies have added to the vandalism and destruction much of what remains of Bogotá’s 20th century monuments.

And even more recently-built structures in the city have run foul and dry. Take the winding waterway designed by the internationally celebrated architect Rogelio Salmona (1929-2007) and which winds its way through an envisioned environmental corridor – “Eje Ambiental” – from Los Andes University to busy San Victorino. Once a layered series of pools and a corridor of shimmering water along the Avenida Jiménez and inaugurated during the administration of Enrique Peñalosa (1998-2000) has all but run dry. Some of the pools are used as baths and urinals by the indigents in the city’s center. “I am no Joan of Arc,” states Ángel, “but the obliteration of patrimony in Bogotá has been monumental.”

Through their consortium Clepsidra, Ángel and Mz Racaman began compiling texts and visually documenting the deplorable state of the statues and fountains in the city. From the colonial yellow sandstone pilas to the Baroque-inspired white marble structures carved by European trained stone smiths, the women in 2010 launched “Agua: Fuentes en Bogotá” a book which since its release has become a valuable guide to the state of patrimony in the city.

For Ángel, the way the city can confront the erosion of its history is to understand the mindset and values of the ancestral Muisca. “We have lost the codes of our sacred sites,” states Ángel after describing how a Muisca observatory found in the fields of Fontibon was destroyed to make way for an industrial center.

Ángel continues to restore damaged books and paintings for her clients, many of which are private collectors of fine art and galleries. While she insists that the work of an art restorer is to “be invisible” and respect the original intentions of the artist, she continues to rally in her free time those who want to see the city’s patrimony protected for future generations. “ We must become less arrogant.” 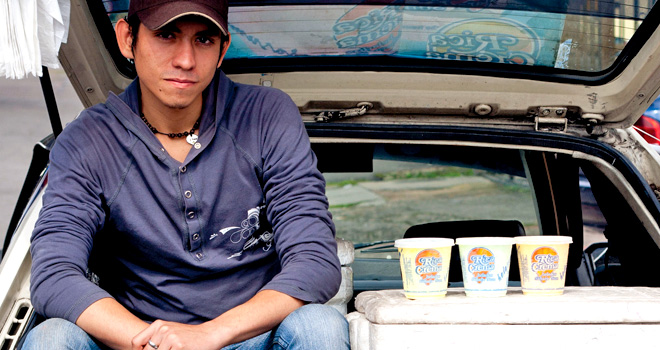