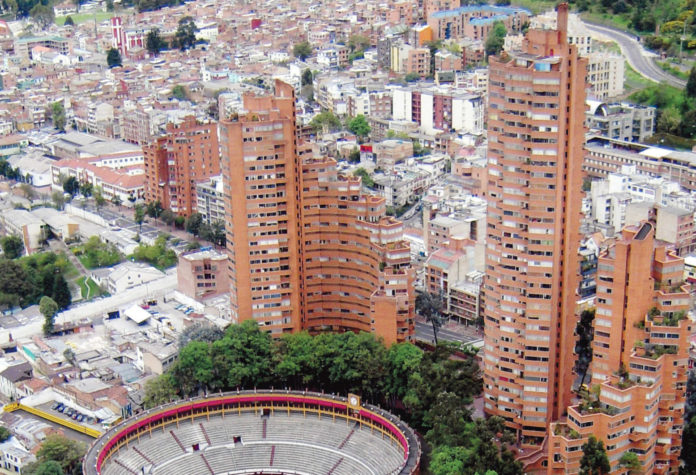 Is the modernization of Bogotá (and Colombia in general) more than gentrification, and if the latter, to what extent is it a good thing?

That is what I ask myself on my daily round of La Macarena, starting with a pre-breakfast visit to the plaza, which, despite the competition of supermarkets and junk food, remains the heart of this neighborhood, as it traditionally was and still ought to be all over the country. In fact, thanks to a remodeling of its handsome timber truss structure a few years ago, followed by a recent spruce-up of its interior, it has become an increasingly popular and even chic place to have a wholesome and remarkably cheap meal for clients who range from executives at the Centro Internacional to laborers from the Perseverancia, the district it is proudly named for, as evidenced by a fine mosaic of a campesina on its frontage and inside, a wall poster of the homage to it rendered by its idol, Gaitán. The color-coded aprons and tables (adorned with the Persy’s emblematic corn cob) set off an array of kitchen stalls, basic but hygienic, which offer great home cooking and are complemented by the usual fruit-and-veg and butcher stalls, along with two new delicatessens which amount to a mini-Carulla on their own. When I moved into La Macarena many years ago, I never imagined I’d be able to purchase brown rice, free-range eggs, imported hams, exotic spices and other delicacies right on my doorstep. The fact that the high-end restaurants in the barrio buy their raw materials there further speaks for the quality of the plaza, yet in this case gentrification hasn’t put it beyond the means of long-time patrons like myself.

However, when the same shopping trip takes me to the two modest but fabulous bakeries where I can buy the whole grain bread that was only sold miles away when I first moved here, some doubts arise, since the first, Crujiente is crowded into a kind of studio apartment, where it ingeniously bakes loaves which are pre-kneaded elsewhere, but you can only eat its perfect croissants at a tiny counter or one table outside, while the second, La Panera, a few blocks up, is too far off the beaten track to attract the number of clients it deserves.

The obvious reason are the soaring rents of a neighborhood which, over the past twenty or so years, has followed a worldwide trend whereby formerly run-down inner-city districts first attract artists (because they are “picturesque” and low-rent), then restaurateurs and gallery owners, and finally, “yuppies”, though in Bogotá they would be stratum 6 types who are tired of the long commute from the North to their downtown offices (and lately, overseas students doing their year abroad, hence the offensive notices “for rent, foreigners only”).

True, La Macarena is somewhat exceptional, since it was already called the “Barrio Bohemio” in the 60’s (when it was the home of Gabo, Botero and Grau, among others), though it always was and remained rather sedate and middle-class, but my point is that the young couples, academics and office workers who lived here when I arrived are being increasingly crowded out by the well-to-do.

Seeing that sometimes makes me feel like the Ancient Mariner, since I know the guy who, in a way, was responsible for the whole thing, a neighbor who leased the site of a then tienda on the corner of the 4A with 29 to mount a chicken grille, then ran out of money and ceded it to El Patio, the fashionable Italian bistro whose initial success was owed to a core clientele of media stars, including its part-owner, Jaime Garzón, and was followed, in copycat Locombia, by the colonization of the same avenue by at least a score of restaurants and bars, and then other streets in the Macarena, and the downhill San Martín, which, taken as a whole, serve dishes whose nationalities I can no longer count (Colombian, French, Italian, Catalan, Spanish, Thai, Serbian, Middle East, Peruvian, Argentinian, Brazilian, Mediterranean, Hamburger, pseudo-Irish, etc.).

Now, aware of the difference between a sufficient and necessary cause, I can’t blame the El Patio or any other single factor like Lonely Planet, traffic jams, a narcotized real-estate market or the clean-up of the Parque de la Independencia for what the zeitgeist wanted to happen anyway, but I do regret the way that practically every empty lot is now being built on, and your local greengrocer or cobbler is being shoved out by fancy dining joints or up-scaled apartment blocks.

All this is compensated for, I must admit, by an abundance of gourmet coffee and pan integral, a backpacker hostel (El Pit) and a fine bookstore (Luvina), among other improvements which add zest to the neighborhood but don’t cost that much. Moreover, the very proliferation of restaurants means that there is one to suit every purse, mine being the no-frills but delicious Italian food at the Monapizza and Wilder’s Pizza. Also, if you want “atmosphere” (which I don’t), there is the kind of Friday-and-Saturday night fever one finds in the Zona Rosa, with similar problems of insecurity at times, moderated, however, by its smaller scale and the absence of discos, because, ironically, the same gentrification wiped out the ones on the Quinta, which were the pestilence of the folks in the Torres del Parque and have now been turned into the barnlike galleries which display the latest in conceptual (so-called) art.

To which I likewise say Ugh!, leading to a reflection on plus ça change. Some places which were firmly established when I first reached the Macarena are still amongst the best in their respective categories, like the restaurant El Boliche (known for pasta); the Konny (quality foods and wines, though priced mainly for Tower dwellers); the bakery/restaurant Andante, headquarters of the Mac tribe of lady executives, professors and, not least, anthropologists (which I mention because the Macarena, I believe, boasts of the highest/per hectare density of that exotic species – of both sexes –on the planet); and the panadería Santa María, the neighborhood social club where, sooner or later, you will run into every macareno you know or have seen on T.V. Similarly, the Sultana remains the best-stocked and most crowded tienda and some quality craftsmen still survive, like the leatherworker César Giraldo, Edgar, the picture framer and alongside him, the maestro of supra-precision carpentry fretwork.

Finally, apart from the plaza, two recently refurbished landmark buildings – the bullring and the police station (visited by Fidel Castro during the Bogotazo) – continue to lend a distinctive character to a district which boasts of a unique combination of interesting people, good food, easy access to downtown, breathable air, green spaces and relatively safe streets.

I still enjoy those advantages, but I don’t want to kid myself about the reason for it. Is gentrification a good thing? In my case, yes, but only because I’ve lived in the same apartment during all that time and my rent is still (barely) affordable.