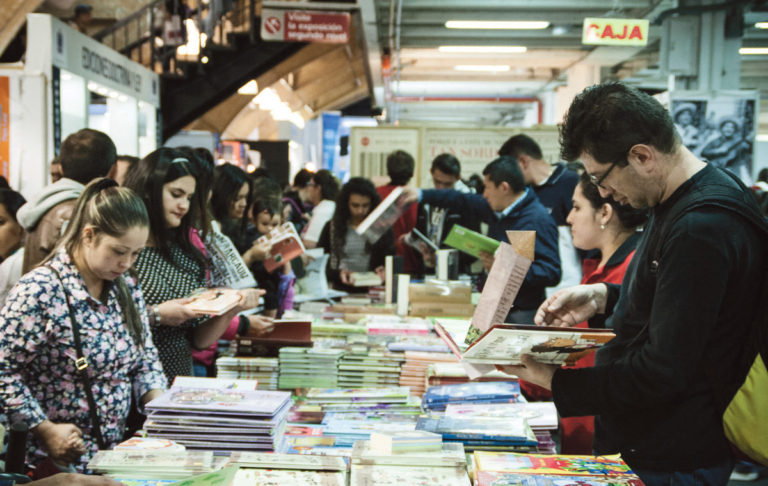 Every year, Bogotá hosts an International Book Fair considered to be one of the most significant events of its kind in Latin America, and an opportunity for the country to promote its publishing industry.

Between April 25 and May 8, FILBo will celebrate its 30th anniversary coinciding with Colombia-France Year 2017. Bringing together more than 500,000 people over fourteen days, this cultural scene unites writers and literary experts with the public in an effort to showcase editorial diversity.

The participation of the annual guest nation provides foreigners and locals with a window through which they are able to gain an insight into a very culturally rich country from its authors to its musicians. According to FILBo, the aim of this year’s program is “to show another side of French, contemporary and popular literary creation, as well as presenting collaborations between French and Colombian authors”.

Colombia France Year will be represented in print with graphic novels, comics and a whole section dedicated to children’s literature. FILBo is aiming to change the way France is viewed by Colombians, presenting new artists that have moved beyond the classical to the contemporary.

During a politically momentous time for this country, the book fair has chosen its key theme to be “Conversations that change lives”, inviting two prominent Nobel Laureates to explore this in detail. These English language novelists are some of the most highly respected names in the world of literature. Both touch upon poignant themes in their work with regards to the political context of the world around them – something that is especially relevant with the ongoing peace process.

There will be a specialised lecture titled Words for Reconciliation, which combines different worldviews to reflect on the internal conflict and demobilisation of the guerrilla, led by the Portuguese sociologist Boaventura Sousa Santos. Sousa’s postcolonial theories of social movements and glo- balization have been published in Asia and across Latin America.

The first of the Nobel Laureates attending FILBo is John Maxwell Coetzee whose work is of dystopian fiction that mirrors reality. Growing up with apartheid, Coetzee took this into his consciousness and transformed it into the literature that gained him recognition as “The Voice of Africa”, one of the greatest against xenophobia. Inspired by the cruelty of the society in which he lived, Coetzee was rewarded for his skill with the 2003 Nobel Prize in Literature. His presence at the event will set the table for a discussion about race and discrimination in Colombia, and whether it still exists today.

Joining Coetzee is Vidiadhar Surajprasad Naipaul, a leading novelist from the English Caribbean whose work focuses on the reality of Indian immigrants in Trinidad and Tobago, as well as the increasing loss of culture within these societies. Naipaul was granted the 2001 Nobel Prize in Literature for his “incorruptible scrutiny in works that compel [one] to see the presence of suppressed histories” and, like Coetzee, deals with very real issues as he is no stranger to controversy.

Perhaps the most anticipated guest attending FILBo this year is Richard Ford, the 73-year-old American writer who will be visiting Colombia for the first time. The theme of his lecture will be based on the speech he gave when accepting the Princess of Asturias for Literature Award, “that which gives me hope are acts with the objective to expand tolerance [and] acceptance of others”. These words significantly tie in with what seems to be a recurring theme of reconciliation and will go hand in hand with the topics addressed by both Naipaul and Coetzee.

After Ford’s presentation on April 29, the 49 year old poet and civil engineer Richard Blanco will talk about his works that focus on identity and heritage. Living in Miami among Cuban exiles, Blanco wrote his first verses and his ‘One Today’ poem that was recited during Barack Obama’s presidential possession in 2012.

To celebrate 50 years of what is undoubtedly this country’s most iconic literary masterpiece, Michi Strausfeld, the German translator of One Hundred Years of Solitude, will be attending the fair to discuss globalization and humanity and how these are the 21st century’s crucial goal for the arts. Music and literature will share the spotlight this year as musicians including Carlos Vives, Piero, Andrés Cepeda and Fito Páez will illustrate their literary side in the upcoming event. The entertainers will be signing books and speaking about their artistic explorations and sources of inspiration.

FILBo is a wonderful opportunity to come face to face with writers that are making their mark on the world of literature. It is one of the most significant revenue generators for the publishing industry in Colombia and, as a result, is an important contributor to the city’s economy. Visitors will be able to enjoy stalls brimming with works from all over the globe at reasonable prices with booksellers offering special discounts and rates throughout the event.