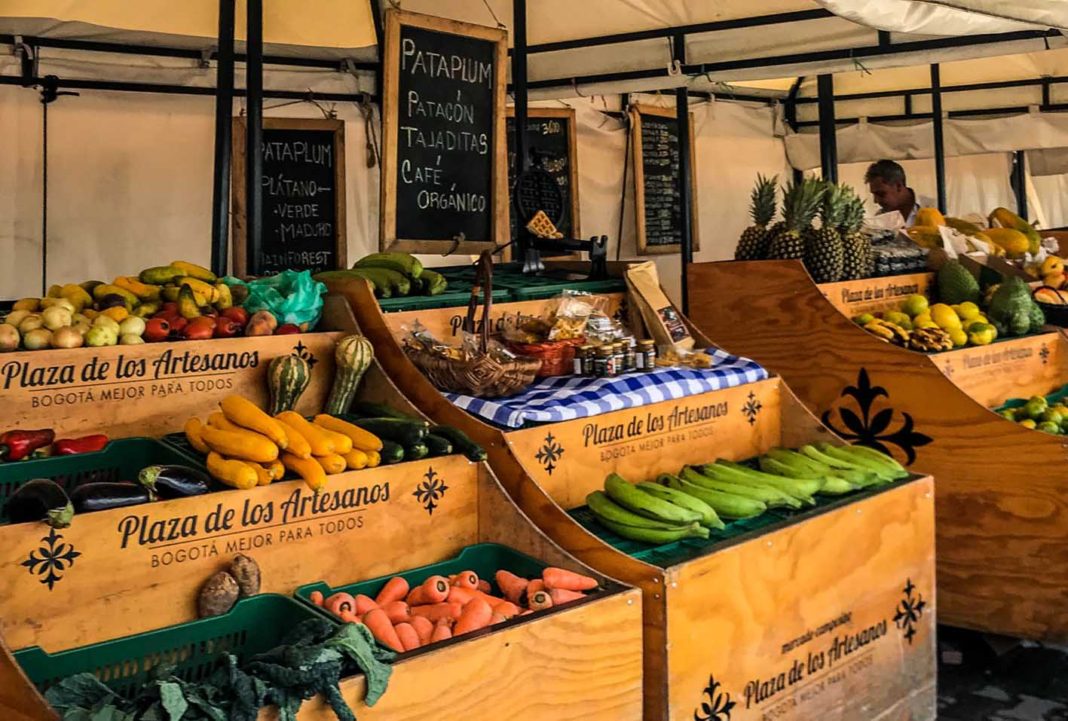 Every Saturday and Sunday, a handful of squares around the city are transformed by the appearance of matching tented booths, vibrant colors of fresh regional produce and aromas of specialty foods cooked to order. The vendors greeting customers from behind the neatly stacked root vegetables and honey displays are part of the Mercados Campesinos program, the Economic Development project by the district designed to improve the food supply chain of Bogotá by connecting local farmers and producers with urban consumers.

With roots in the 2006 Master Food Policy Plan for Bogotá, the Mercados Campesinos have flourished in recent years. Between 2016 and 2019, a total of 682 markets have taken place across 19 of the 20 localities, with over 1,100 new farmers joining. This expansion has allowed the program to reach more consumers while offering opportunities to more vendors.

The Plaza de Los Artesanos, next door to Parque Central Simón Bolívar, always hosts a weekend-long market. In addition to this regular spot, markets pop up in a set of other permanent and itinerant locations throughout the city that are selected on a rotating basis, and published on the Mercados Campesinos website. In line with the mission to create better links in the food supply chain, the shifting locations are an essential element of the program’s design: This format brings locally-grown and produced foods not just to the city, but straight into numerous communities for better access.

The central tenet of the program is that there are no intermediaries. Engaging in direct exchange with the consumer allows growers to set lower prices, benefiting both parties. The opportunity to interact with a producer also draws the health and environmentally-conscious client interested in buying food that has been harvested and prepared using wholesome practices.

“It’s different from what happens at the supermarket, where you don’t know anything about the product and you don’t have a way to ask,” points out Isaac Durán of Nutri Pop’s, a family company that buys grain from small farmers to craft puffed cereal-based lunchbox snacks, cookies and energy bars. “You’re giving work to fewer people at the supermarket. Here, you see it’s like a supermarket, but every product has its producer.”

Just like every product has its producer, every producer has a story, and the convivial atmosphere of the market lends itself to an exchange that goes beyond checking items off a grocery list. Vendors converse throughout the day, connect with customers about perspectives on responsible agriculture, and sit in for each other to keep their neighbors’ sales going when they take breaks.

“Here, we offer a lot of support to each other,” says Arturo López Velandia, who brings his agro-ecological lettuce, beets, gooseberries and other cold-weather produce from El Laguito farm in La Calera. “It’s also interesting to have the exchange of knowledge among the producers, as well as with the clients themselves.” For López, creating dialogue and interaction between the producer and consumer is essential: He is implementing a stroller and wheelchair accessible design on the farm so that they can invite more folks to stop by to learn about health-aware and environmentally-friendly agricultural techniques.

Diversity and inclusion constitute an important focal point of the Mercados Campesinos. The program currently enrolls more than 120 producers from minority or disadvantaged groups. This includes indigenous producers, Afro-Colombians and other ethnic minorities, those with disabilities and farmers who have been victims of the internal conflict.

In turn, producers have an eye on the needs of their diverse client base. Magdalena Gala, who makes juices with fruit grown in the urban garden around the corner, noticed that when people with fewer resources come to the market, they’re more interested in getting something to eat than picking up groceries. “Everyone has two thousand pesos, right?” Gala reasons. “So we’ve done things like offering small prepared foods because people want to eat… $1,500 for a little empanada, they  have enough to buy it.” Gala also sells a range of handmade goods created by fellow members of Tienda Sin Barreras, an organization of mothers of children with multiple disabilities. Among all things at the farmer’s market, solidarity is at the forefront.

Producers who are interested in becoming a part of the Mercados Campesinos submit an online form and their products go through an approval process. Once affiliated, they are furnished with market space free of charge, as well as support with Invima certification if they don’t have it yet. “The important thing is that they are producers who aren’t large product marketers, that they’re direct producers,” clarifies Subsecretary of Economic Development Felipe Valencia Bitar. “Because precisely what we want is to avoid having that intermediary – so that the products can be sold at fair prices, and so that the producers can take home the earnings.”