Colombia registered 26 victims of coronavirus on Tuesday, and lowest number of deaths in one day since the virus claimed 31 lives on May 28, 2020. The significant lowering in single day fatalities was also accompanied by a deceleration in new infections, and which on the same day, added 1,435 cases. Although Tuesday’s cases were slightly higher than a low (1,124) reported by the Ministry of Health for September 6, the total number of active cases will drop below 20,000 on Wednesday.

The encouraging numbers confirm that despite circulation of the MU variant (first detected in the country in January this year), and disdainfully termed as the “Colombia variant” by British newspapers, greater immunity is the result of an aggressive vaccination drive that has administered 38 million doses among the country’s 50 million inhabitants. Close to 16 million residents have completed a double dose cycle.

In Bogotá, Mayor Claudia López confirmed that 70% of residents have received a first dose of the coronavirus vaccine, while 46% of the population aged 12 and over (6,001,867) have completed the cycle. “We are ready to receive hundreds of thousands of vaccines and go from 70% to 90% of the vaccinated population. Vaccination is the best prevention, together with biosafety protocols, so that we continue with the economic reactivation of Bogotá,” stated López.

After a week in which vaccines have been limited to first doses given depleting supplies, on Monday a shipment of 2 million Sinovac vaccines arrived from the Chinese manufacturer and the Government of Spain handed-over an additional 957.600 AstraZeneca vaccines through the WHO’s Covax mechanism. The donation from Spain is the largest from a European Union member nation. On Wednesday, a shipment of 1.2 million Janssen vaccines is expected to arrive in the Colombian capital. 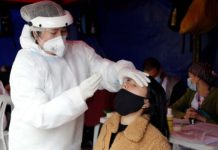